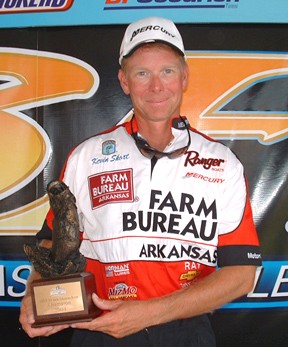 RUSSELLVILLE, Ark. – Boater Division competitor Kevin Short of Mayflower earned $3,690 Saturday as winner of the Wal-Mart Bass Fishing League Arkie Division event on the Arkansas River in Russellville. The tournament was the fourth of five regular-season Arkie Division events. The regular season will wrap up Sept. 25-26 with a two-day Super Tournament on Lake Hamilton in Hot Springs.

Kevin Riney of Pocahontas earned $655 as the Boater Division big-bass award winner with a 5-pound bass.

Kevin McDonald of Alexander won the 131-competitor Co-angler Division with a five-bass catch weighing 14 pounds, 2 ounces. He earned $1,845 for the win. He also claimed co-angler big-bass honors and $328 with a 3-pound, 13-ounce bass.

Tied for second were Scott Boatright of Sheridan and Sheril Middleton of Batesville. Both anglers caught a five-bass limit weighing 13 pounds, 3 ounces to collect $775 each. In fourth was Tony Torres of Anderson, Mo., with five bass that weighed 12 pounds, 3 ounces worth $480, and finishing fifth was Jason Lieblong of Conway with five bass weighing 9 pounds, 10 ounces that earned him $406.

Following the regular season, the top 30 Arkie Division boaters and co-anglers based on year-end points standings will advance to the Toledo Bend regional near Many, La., Oct. 12-16. They will compete against qualifying anglers from the Louisiana, Okie and Ozark divisions for one of six slots in the 2005 All-American, one of competitive bass fishing’s most prestigious events. The winning boater at the All-American will take home $100,000 cash, and the winning co-angler will earn $50,000 cash.