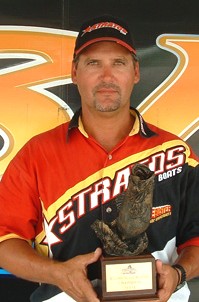 LANETT, Ala. – Boater Division competitor Rodger Beaver of Leesburg, Ga., earned $4,543 Saturday as winner of the Wal-Mart Bass Fishing League Bulldog Division event on West Point Lake in Lanett. The tournament was the fourth of five regular-season Bulldog Division events. The regular season will wrap up Oct. 2-3 with a two-day Super Tournament on Lake Eufaula in Eufaula.

Brad Warfield of Sharpsburg, Ga., earned a $500 bonus from Ranger Boats as the highest-finishing participant in the Ranger Cup incentive program. Bob Snellgrove of Warner Robins, Ga., earned $880 as the Boater Division big-bass award winner with a 7-pound, 5-ounce bass.

Jimmie Bailey of Valdosta, Ga., won the 176-competitor Co-angler Division with a five-bass catch weighing 10 pounds, 13 ounces. He earned $2,272 for the win.

In second was Timothy Dehaan of Atlanta with four bass weighing 9 pounds, 11 ounces that earned him $1,136. Finishing third was Edwin Hunt of Duluth, Ga., with a five-bass catch that weighed 9 pounds worth $772. Tied for fourth were George Goodman Jr. of Monticello, Ga., and Bobby Duncan of Leesburg, Ga. Both anglers caught three bass weighing 8 pounds, 11 ounces that earned them $545 each.

Following the regular season, the top 30 Bulldog Division boaters and co-anglers based on year-end points standings will advance to the Wheeler Lake regional near Rogersville, Ala., Oct. 19-23. They will compete against qualifying anglers from the LBL, Mountain and Shenandoah divisions for one of six slots in the 2005 All-American, one of competitive bass fishing’s most prestigious events. The winning boater at the All-American will take home $100,000 cash, and the winning co-angler will earn $50,000 cash.