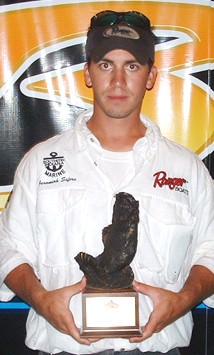 BLOOMINGTON, Ind. – Boater Division competitor Jeramiah Sifers of Sellersburg earned $3,878 Saturday as winner of the Wal-Mart Bass Fishing League Hoosier Division event on Lake Monroe near Bloomington. The tournament was the fourth of five regular-season Hoosier Division events. The regular season will wrap up Sept. 18-19 with a two-day Super Tournament on the Ohio River near Cannelton.

Sifers used a soft plastic in 12 feet of water to catch his tournament-winning stringer of three bass that weighed 12 pounds, 4 ounces. He also earned a $1,000 bonus from Ranger Boats as the highest-finishing participant in the Ranger Cup incentive program, and he earned another $1,000 from Garmin for using only Garmin electronics during the event.

Robert (Bob) Wells of Aurora won the Co-angler Division with a two-bass catch weighing 6 pounds, 7 ounces. He caught his tournament-winning bass on a Brush Hog and earned $1,939 for the win.

Lee claimed co-angler big-bass honors and $355 with his 5-pound, 1-ounce bass. He caught his big bass on a Senko.

Following the regular season, the top 30 Hoosier Division boaters and co-anglers based on year-end points standings will advance to the Kentucky Lake regional presented by Yamaha near Gilbertsville, Ky., Oct. 12-16. They will compete against qualifying anglers from the Choo Choo, Great Lakes and Michigan divisions for one of six slots in the 2005 All-American, one of competitive bass fishing’s most prestigious events. The winning boater at the All-American will take home $100,000 cash, and the winning co-angler will earn $50,000 cash.