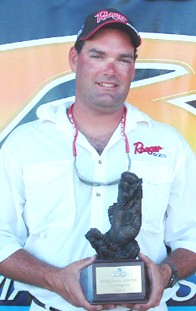 Edwards caught 6 pounds, 14 ounces Saturday to advance to Sunday’s competition, where he caught 8 pounds, 11 ounces to post the heaviest two-day weight and claim the win. Edwards also earned a $1,000 bonus from Ranger Boats as the highest-finishing participant in the Ranger Cup incentive program, and he also earned a $1,000 bonus from Garmin for using Garmin electronics exclusively during the event. He finished in the top 10 in four out of five Hoosier Division events this season.

Craig Mills of Hamilton, Ohio, earned $1,050 as the Boater Division big-bass winner, thanks to a 3-pound, 3-ounce bass.

Steve Jones of Indianapolis earned $3,185 as winner of the Co-angler Division with a two-day total of 5 pounds, 6 ounces. The win completes a rookie season in which he ranked 20th among Hoosier Division co-anglers.

Kent Lee of Loveland, Ohio, claimed co-angler big-bass honors with a 3-pound, 6-ounce bass. He earned $520 for his big bass.

Each of the BFL’s 24 nationwide divisions features four one-day tournaments and one two-day Super Tournament within the regular season. In Super Tournament competition, the entire field competes on day one and the top 20 percent advances to day two, with the winners determined by the heaviest two-day catch weights. More money is awarded at Super Tournaments as well as more points that count toward year-end angler standings. In a Super Tournament, 300 points are awarded for first place, 299 for second, 298 for third, and so on.

The top 30 boaters and co-anglers in the Hoosier Division will advance to the Kentucky Lake regional presented by Yamaha, which will be held Oct. 12-16 in Gilbertsville, Ky. There they will compete against qualifying anglers from the Choo Choo, Great Lakes and Michigan divisions for one of six slots in the 2005 All-American. The All-American awards a $100,000 cash prize to the winning boater and $50,000 to the winning co-angler, making it one of the most prestigious and lucrative events in competitive bass fishing.