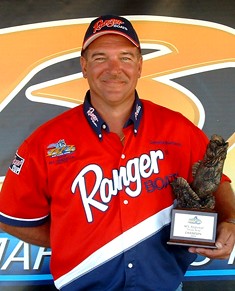 MANY, La. – Boater Dennis Berhorst of Holts Summit, Mo., leads the list of six anglers who earned a ticket to the 2005 All-American at this weekend’s Wal-Mart Bass Fishing League Toledo Bend Regional. Qualifying anglers from four BFL divisions advanced to the regional, and Berhorst topped the leaderboard with a three-day catch of 15 bass weighing 31 pounds, 15 ounces that earned him a new Chevy truck and an Evinrude- or Yamaha-powered Ranger boat.

The top 30 boaters and top 30 co-anglers from the Arkie, Louisiana, Okie and Ozark divisions comprised the Toledo Bend Regional field. Berhorst, an Ozark Division angler, caught 8 pounds, 8 ounces on day one and followed that up with another 12 pounds, 10 ounces on day two, and he wrapped up the win with a final-day catch that weighed 10 pounds, 13 ounces. He caught his tournament-winning bass on a black and blue jig in shallow water around boat docks.

Berhorst also earned a $1,000 bonus from Ranger Boats as the highest-finishing participant in the Ranger Cup incentive program, and Bombardier awarded him another $1,000 for using an Evinrude Direct Injection outboard. He also earned $1,000 from Garmin for using only qualifying Garmin electronics during the event.

Gans, Okla., resident Brent Haggard won the Co-angler Division with a three-day total of eight bass weighing 22 pounds, 13 ounces. He caught his winning stringer on a spinnerbait in shallow water. Haggard advanced to the regional from the Okie Division, where he ranked 23rd in year-end points standings. He won an Evinrude- or Yamaha-powered Ranger boat for his regional win. This is his first season to compete in the BFL.

In regional competition, the full field competes for two days to determine the top six that advance to day three, where they compete for position and prizes. All six automatically advance to the All-American.