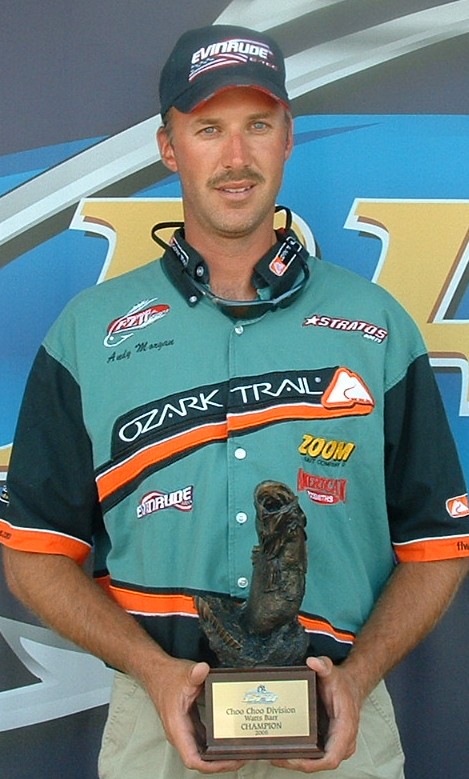 Morgan earned an additional $1,000 as winner of the Bombardier contingency award for being equipped with a qualified Evinrude Direct Injection outboard.

Tenth-place finisher Wesley Strader of Spring City earned $750 as winner of the Ranger Cup and Powered by Yamaha awards.

Josh Wofford of Ooltewah and Tim Wiley of Kingston tied for Boater Division big-bass award honors. Each angler earned $290 for a 4-pound, 10-ounce bass. Wofford caught his big bass on a 3/8-ounce black jig, while Wiley landed his big bass on a Texas-rigged worm.

Pat Lay of Cleveland earned $2,043 as the co-angler winner, thanks to eight bass weighing 20 pounds that he caught on a Zoom Old Monster worm.

Biondo earned $290 as the co-angler big-bass award winner with a 4-pound, 1-ounce bass he caught on a Carolina-rigged lizard.

The top 40 Choo Choo Division boaters and co-anglers based on year-end points standings will advance to the Clarks Hill Lake Regional near Augusta, Ga., Oct. 11-15 where they will compete against Dixie, North Carolina and Shenandoah Division anglers for one of six slots in the 2006 All-American. With a total purse of $1 million and a potential $140,000 cash prize going to the winning boater and $70,000 going to the winning co-angler, the All-American is one of the most prestigious and lucrative events in bass fishing.