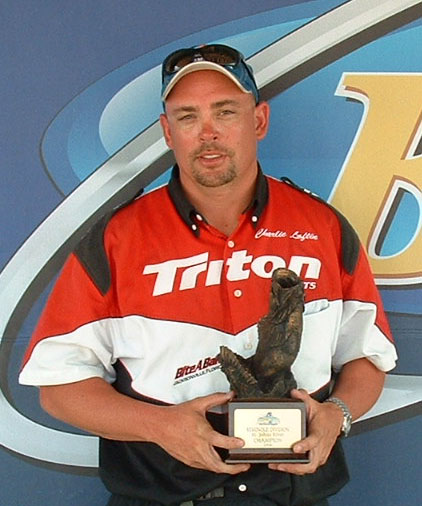 Loftin’s two-day winning catch of 10 bass weighed 27 pounds, 7 ounces. He fished a trick worm on a Carolina rig up and down the river traveling as far as Lake George to catch his winning two-day limit.

Ben Broughton of Day, Fla., earned $2,233 as the co-angler winner thanks to nine bass weighing 28 pounds, 2 ounces that he caught on a watermelon and red Senko fished around stumps and on flats.

Back also earned $255 as the co-angler Snickers Big Bass winner with a 5-pound, 10-ounce largemouth bass.

The top 40 Seminole Division boaters and co-anglers based on year-end points standings will now advance to the no-entry-fee Regional Championship near Demopolis, Ala., Oct. 19-21, where they will compete against Choo-Choo, Everglades and Mississippi Division anglers for a new Ranger boat and a Chevy truck in the Boater Division plus six slots in the no-entry-fee 2007 Wal-Mart BFL All-American presented by Chevy. With a total purse of $1 million and a potential $140,000 cash going to the winning boater and $70,000 going to the winning co-angler, the All-American is one of the most prestigious and lucrative events in bass fishing.