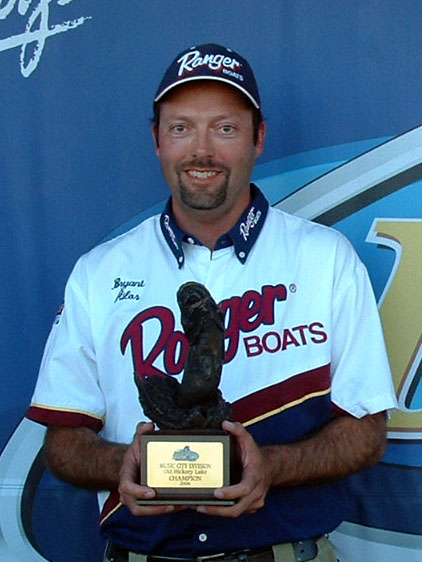 GALLATIN, Tenn. – Boater Bryant Ailor of Knoxville, Tenn., earned 300 points and $5,761 Sunday as the winner of the Wal-Mart Bass Fishing League Music City Division Super Tournament on Old Hickory Lake. He also earned a $1,000 Ranger Cup Bonus for a total of $6,761 in winnings.

Ailor’s two-day winning catch of 10 bass weighed 17 pounds, 10 ounces. He was throwing crankbaits around 10 to 15 feet of water to catch his bass.

David Womack of Gallatin, Tenn., earned $2,880 as the co-angler winner thanks to four bass weighing 11 pounds, 7 ounces that he caught on a Zoom Baby Brush Hog thrown around wood in 1 to 2 feet of water.

The top 40 Music City Division boaters and co-anglers based on year-end points standings will now advance to the no-entry-fee Lake Chickamauga Regional Championship near Hixson, Tenn., Oct. 12-14, where they will compete against Bulldog, Dixie and LBL anglers for a new Ranger boat and a Chevy truck in the Boater Division plus six slots in the no-entry-fee 2007 Wal-Mart BFL All-American presented by Chevy. With a total purse of $1 million and a potential $140,000 cash going to the winning boater and $70,000 going to the winning co-angler, the All-American is one of the most prestigious and lucrative events in bass fishing.