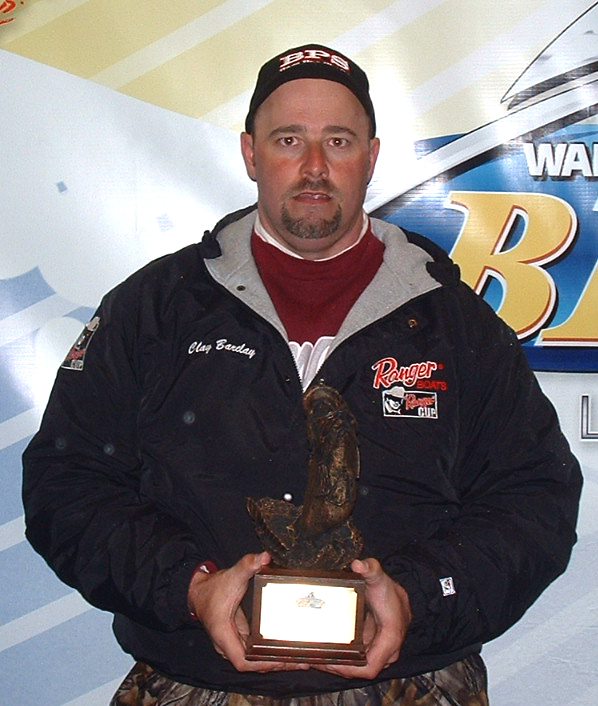 SCOTTSBORO, Ala. – Boater Clay Barclay of Scottsboro, Ala., won the Wal-Mart Bass Fishing League Bama Division tournament on Lake Guntersville Saturday with a five-bass catch weighing 25 pounds, 2 ounces. The victory earned Barclay $4,914 plus an $867 Ranger bonus and placed him one step closer to qualifying for the Fort Loudin-Tellico Lakes Regional Championship in Lenoir City, Tenn., Oct. 18-20, where he could ultimately win a new 519VX Ranger boat and a Chevy truck.

Rusty Mayfield of Heflin, Ala., earned $2,891 as the co-angler winner Saturday thanks to five bass weighing 21 pounds, 11 ounces that he caught while fishing a Rat-L-Trap and jerkbait in shallow water.

The Bama Division’s next event will be March 24 on Weiss Lake in Centre, Ala., followed by a tournament May 12 on Wheeler Lake in Decatur, Ala. The division’s fourth event will be held June 30 on Neely Henry in Gadsden, Ala., and the final event of the regular season will be a two-day Super Tournament held Sept. 15-16 on Lake Guntersville in Scottsboro, Ala.

Following the end of regular-season competition, the top 40 boaters and 40 co-anglers based on year-end points standings in the division will advance to the no-entry-fee Fort Loudin-Tellico Lakes Regional Championship where they will compete against top qualifiers from three other BFL divisions. At the Regional Championship boaters will fish for a new Ranger boat and Chevy truck and co-anglers will fish for a new Ranger boat. The top six boaters and top six co-anglers at the Regional Championship will also advance to the 2008 All-American presented by Chevy. With a total purse of $1 million, a potential $140,000 cash prize going to the winning boater and as much as $70,000 going to the winning co-angler, the All-American is one of the most prestigious and lucrative events in bass fishing. The winning boater and winning co-angler at the All-American also advance to the no-entry-fee $2 million 2008 Forrest Wood Cup. This event, featuring a top award of $1 million, is the sport’s biggest championship.