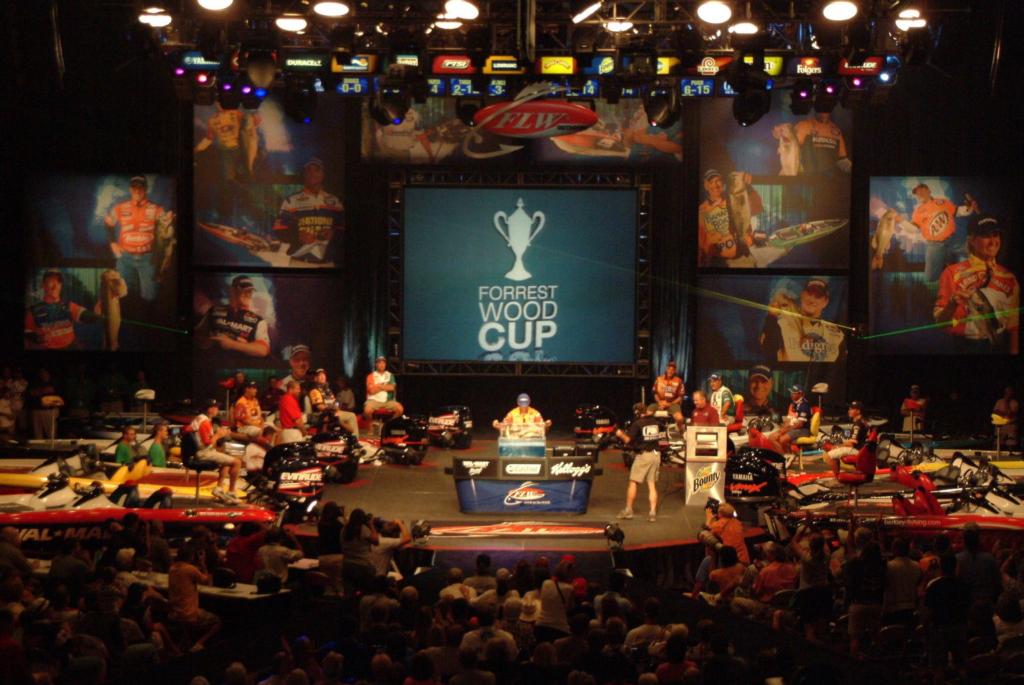 HOT SPRINGS (Aug. 4, 2007) – Scott Suggs of Bryant, Ark., caught a five-bass limit weighing 11 pounds Saturday to capture the lead in the $2 million Forrest Wood Cup presented by Castrol on Lake Ouachita. Suggs, who fishes for Team Folgers, now holds an impressive 4-pound, 1-ounce edge over his closest competitor, Greg Pugh of Cullman, Ala., heading into the final day of competition. If he holds on for the win, Suggs will pocket $1 million – the largest award in the history of professional bass fishing.

“I’m going to stay with my game plan,” said Suggs, who has earned more than $182,000 in FLW Outdoors events and has the hometown Hot Springs crowd behind him. A group of about 40 spectator boats followed Suggs during competition Saturday. “The strongest parts of my days have come in the first five or six stops.”

Suggs said he caught fish Saturday the same way he caught them the first two days of competition – targeting suspending fish near trees in water 40 to 60 feet deep early and then fishing structure with a spinnerbait and big worm.

“It would mean more than the world to me to win the Forrest Wood Cup for these people,” Suggs said of the hometown crowd in Summit Arena. “They have followed me through the ups and the downs, so it would be a reward for all of us.”

Pugh, who fishes for Team Pedigree, echoed most of the top-10 anglers by admitting that tough conditions had him stumped for the most part on day three of the lucrative tournament.

“It was a tough day,” said Pugh, who has amassed more than $350,000 in career winnings with FLW Outdoors. “I started out throwing topwater baits this morning, and we had 2- and 3-pounders rolling all over the place. It didn’t matter what we threw in there, they wouldn’t eat it. It was just really frustrating. After that I went to a few of my backup spots and pulled a few nice fish.

“I think I know where I am going to start tomorrow,” Pugh added. “I’m probably going to back a few things up and try something different. I’ve caught a few stringers over 20 pounds during practice, and I’m excited to see how this plays out. I really didn’t think it would turn out like this. I was expecting to be down by 8 pounds or more. All I can say is that I’m excited. What else can you say? It’s going to be a million dollars, and I’m as cool and settled as I can be.”

Up until Saturday, Pugh had been fishing deep with crankbaits, but he said he doesn’t think that the technique will pay off on the final day of competition.

“I’ve been relying all week long on that bite, and I threw it out today and went after them with a worm,” Pugh said.

The switch paid off with two bass weighing 6 pounds, 15 ounces.

Overall there were 23 bass weighing 46 pounds, 4 ounces caught in the Pro Division Saturday. The catch included one five-bass limit.

“It’s just awesome,” said Bridges, who celebrated his 66th birthday Saturday. “I’m just so thrilled about it. I doubt very seriously at my age that I will be able to accomplish it again, but it’s in the history books now that I won the 2007 Forrest Wood Cup.

“Bragging rights are more important than the money,” Bridges added. “I just want to take the check home to my wife.”

Bridges said he started out the week throwing a swimming Senko in shallow water around grass. Today, Dudley, his pro partner, was fishing a deep crankbait, and Bridges had to adapt by throwing a Texas-rigged worm around deeper, off-shore structure.

Bridges opened the tournament in 44th place Thursday with two bass weighing 2-9 while fishing with pro Rob Kilby of Hot Springs, Ark. On Friday he jumped into ninth place on the strength of a four-bass catch weighing 7-11 while fishing with Woo Daves of Spring Grove, Va.

Sanchez was the first female angler in the sports history to advance to the final round of the Forrest Wood Cup.

Overall there were 22 bass weighing 38 pounds, 6 ounces caught in the Co-angler Division Saturday. The catch included no five-bass limits.

Forrest Wood Cup contenders will launch at 7 a.m. Sunday from Brady Mountain Resort located at 4120 Brady Mountain Road in Royal, Ark., and the weigh-in will be held at Summit Arena located at 134 Convention Blvd. in Hot Springs at 5 p.m. The Forrest Wood Cup Family Fun Zone and Outdoor Show – featuring more than 140 exhibits, fishing seminars by Forrest L. Wood and other bass-fishing legends, and free daily giveaways – will be open 11 a.m. to 7 p.m. Sunday at the Hot Springs Convention Center.

On Sunday, the first 1,500 children 14 and under visiting the Family Fun Zone will receive a free rod and reel combo. One lucky person attending the final weigh-in Sunday will even win a $53,000 Ranger Z20 powered by Yamaha. Participants must be present to win.

Multi-platinum recording artist Tracy Byrd will perform a free concert, presented by US 97-FM, on the main stage at Summit Arena on Sunday at 4 p.m., just before the start of the final weigh-in.

Coverage of the Forrest Wood Cup will be broadcast to 81 million FSN (Fox Sports Net) subscribers in the United States Sept. 23 and Sept. 30 as part of the “FLW Outdoors” television program. “FLW Outdoors” airs Sunday mornings at 11 Eastern time. “FLW Outdoors” is also broadcast in Canada on WFN (World Fishing Network) and to more than 429 million households in the United Kingdom, Europe, Russia, Australia, Africa, Asia, and the Middle East through Matchroom Sport, making it the most widely distributed fishing program in the world. Additionally, FLW Outdoors is proud to provide tournament coverage to more than 800,000 servicemembers stationed around the world in 177 countries and aboard Navy ships through broadcasts on the American Forces Network.