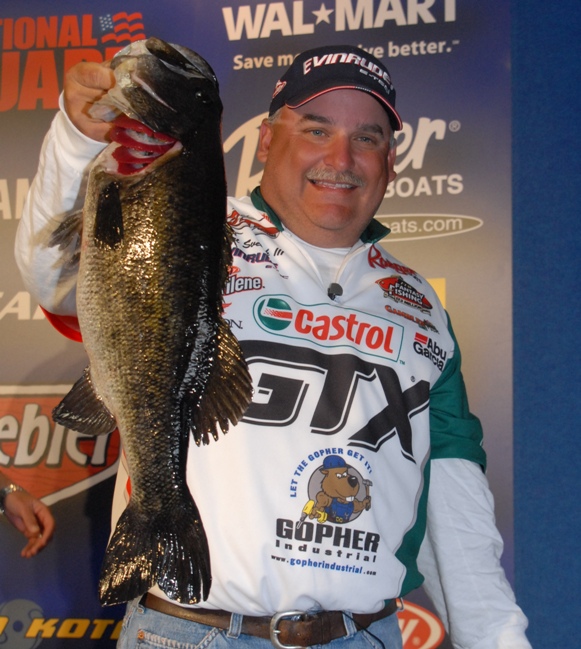 MINNEAPOLIS – Tune in Sunday, March 30, to “FLW Outdoors” on FSN for the season-opening Wal-Mart FLW Tour event on Lake Toho in Kissimmee, Fla. The $1 million tournament, which was hosted by the Central Florida Sports Commission and the Kissimmee – St. Cloud Convention and Visitors Bureau, awarded the winning bass pro a cash prize of $125,000.

The one-hour show is the first of a two-part series covering stop No. 1 on the $9.5 million FLW Tour season. The tournament featured 400 top bass anglers from 35 states, Mexico, Italy, Spain, Australia and Japan.

At the conclusion of the two-day opening round, Castrol pro Carl Svebek leads all competitors with a 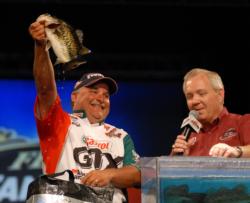 two-day total of 10 bass weighing 35 pounds, 2 ounces. On day one the Siloam Springs, Ark., native caught 17-10 and he followed up that performance with a remarkably consistent 17-8. Svebek, the man who invented the swacky rig, is fishing Lake Toho exclusively – just a couple of miles from the launch site – wacky rigging his namesake Gambler Sweebo worm around Kissimmee grass to catch approximately 15 keepers per day. This is Svebek’s first trip to the top 10 since 2005 and he’s certainly planning to make the most of his opportunity.

Also in the top 10 is PTSI pro Ron Shuffield. Although Shuffield lives in Bismarck, Ark., he has a track record for catching big bass in the Sunshine State. At the 2006 Bassmasters Classic on Toho, Shuffield 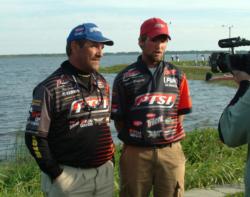 took third place with a three-day total weight of 47 pounds, 14 ounces. Now on the FLW Tour, Shuffield is second with an opening-round total of 31 pounds, 8 ounces. To catch his fish, the veteran pro is alternating between spots in Lake Cypress and Lake Kissimmee, but his quality bass are coming from Cypress and are falling victim to a rattling lipless crankbait. He’s also using a 10-inch Berkley Power worm tied to 15-pound Trilene fluorocarbon around outside grass clumps. This tournament is special for Shuffield and not just because he’s the top 10. His son Spencer, who was severely injured in a hunting accident in the winter, is also in the top 10 in the Co-angler Division.

The most surprising name in the top 10 is FLW Tour rookie Randy Hadden. The Jacksonville, Fla., native is no stranger to competing at the highest level. After playing collegiate baseball at the University of

South Carolina, Hadden was taken in the 14th round (434th overall) of the 1999 draft by the Los Angeles Dodgers. Before suffering a torn rotator cuff in 2004, Hadden was a right-handed starting pitcher who threw a devastating two-seam fastball that would routinely clock out at 92-94 mph. In his first tour-level bass tournament, he’s also proving that he’s got a knack for catching giant fish. On day one, Hadden caught an 11-pound, 9-ounce behemoth which was the Snickers Big Bass. On day two, he again caught the Snickers Big Bass – this time weighing 8 pounds, 8 ounces. That’s 20 pounds of bass in just two fish, accounting for nearly two-thirds of his 30-pound, 5-ounce total weight.

FSN also flashes back to August 2007 at the $2 million Forrest Wood Cup on Lake Ouachita in Hot Springs, Ark. In this feature, Folgers pro Scott Suggs shares his excitement as he looks back at his $1 million victory – the largest first-place payday in the history of professional bass fishing.

In addition, Castrol pro Mike Surman of Boca Raton, Fla., participates in this edition of Fishing 101. Surman, who has won over $370,000 in his FLW Outdoors career, demonstrates techniques for triggering a reaction bite.

“FLW Outdoors” is also broadcast internationally to more than 429 million households in such countries as Germany, China, South Africa, Australia, Malaysia, Russia, Hungary and the United Kingdom, making it the most widely distributed weekly outdoor-sports television show in the world.

Tournament anglers aren’t the only ones winning big this season. With the introduction of FLW Fantasy Fishing™, FLW Outdoors® offers anyone the opportunity to enter for their chance to land the catch of a lifetime with the opportunity to win $7.3 million in cash and prizes. Players can become a virtual pro angler by signing up for Player’s Advantage, providing them with exclusive insider information that could guide them to a $100,000 victory at every Wal-Mart FLW Tour® stop and the Forrest Wood Cup. Player’s Advantage will give them an edge over the competition and increase their shot for a $1 million cash grand prize that will be awarded to the FLW Fantasy Fishing cumulative points winner. Those who visit FantasyFishing.com today can sign up for Player’s Advantage and FLW Outdoors will include a $15 Wal-Mart gift card.