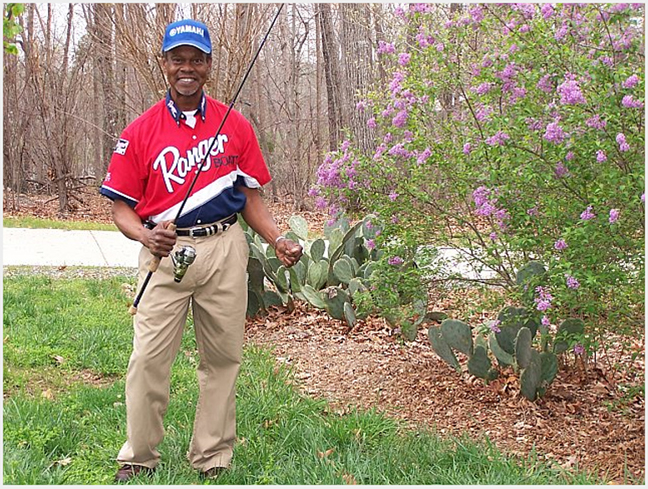 MINNEAPOLIS – The heat is on in a worldwide race to win a $1 million grand prize and more than 4,000 other prizes in the 2008 FLW Fantasy Fishing online game, which offers $7.3 million in cash and prizes by August.

“It’s still hard to believe that I won. My wife, Sandra, is still in shock,” said Pickett, 55, a longtime Greensboro resident who has worked with the U.S. Postal Service for 18 years as an electronics technician. “It’s easy to enter, and it’s fun to play. It makes following the FLW pro bass anglers even that more exciting.”

To win $100,000, Pickett selected a fantasy team of 10 pro anglers through fantasyfishing.com from among the 200 pro anglers who are participating in the Wal-Mart FLW Tour, a series of seven tournaments, including the championship tournament, the Forrest Wood Cup, professional bass fishing’s highest-paying championship tournament. Pickett came in first based on the real, on-the-water performance of the pro anglers he picked for his fantasy team who fished the tour’s second four-day tournament, which was conducted last weekend at Lewis Smith Lake, located about an hour north of Birmingham, Ala. The tournament was won by pro angler Michael Bennett, a 23-year-old Roseville, Calif., resident (a suburb of Sacramento), fishing for the Duracell team. Bennett weighed in a total of 27 pounds, 8 ounces of spotted bass in the final two days of the competition to win a cash prize of $125,000.

The key to winning an FLW Fantasy Fishing contest is selecting pro anglers who have inside knowledge of the tournament lake, especially those such as Greg Pugh, who lives near and regularly fishes Lewis Smith Lake, said Pickett, a Ranger fishing-boat owner, who has participated in the Stren Series bass-fishing tournaments as a semiprofessional bass angler.

For those who don’t bass fish or don’t regularly follow pro bass fishing, Pickett offers the following tip: “You need to pick pro anglers who best match up to a tournament lake. You especially need to know who the locals are.”

To help fantasy fishing players get the inside track, FLW Fantasy Fishing created Player’s Advantage, an online tool for experts and newcomers alike, that provides in-depth information about all 200 anglers participating in the Wal-Mart FLW Tour. Sylvia Tukes, a newcomer to FLW Fantasy Fishing, who grabbed third place in the Lewis Smith tournament, credits Player’s Advantage for helping her pick her fantasy fishing team.

A Norristown, Pa., resident (suburb of Philadelphia), Tukes entered her first-ever FLW Fantasy Fishing tournament this past weekend and was one of many female participants playing and winning at FLW Fantasy Fishing. Although Tukes had fished as a child and had watched “FLW Outdoors,” a TV program on Fox Sports Net (FSN) that features segments about the Wal-Mart FLW Tour, she admits that she didn’t know much about fishing or fantasy sports. But, at the urging of her co-workers, Tukes entered and said Player’s Advantage was the key to her success.

“I didn’t know as much about pro fishing as my co-workers,” said Tukes. “It saved me a lot of time and gave me all the information I needed to pick my team.”

In addition to Pickett and Tukes, more than 580 other participants won prizes in FLW Fantasy Fishing’s second tournament, and all are in the running for the game’s $1 million grand prize. More than 4,000 prizes totaling as much as $7.3 million will be awarded during the course of the FLW Fantasy Fishing season. In addition to millions in cash, other prizes such as Ranger boats; a Chevy Silverado; Yamaha and BRP ATVs and personal watercrafts; hundreds of thousands of dollars in Wal-Mart gift cards; tens of thousands of dollars of free BP gasoline and more will be awarded to the players with the highest point totals earned, based on the placement of their team of 10 professional anglers for each tournament.

The race is on

Like the pro anglers who are competing neck and neck with each other for the Wal-Mart FLW Tour $1 million tournament series prize, the race for the FLW Fantasy Fishing $1 million grand prize also is heating up.

After two fantasy tournaments, the new leader, with 8,424 overall points, is Todd Hollowell, a resident of Indianapolis suburb Fishers, Ind. Hollowell gained the overall lead in the FLW Fantasy Fishing game even though he came in 81st place in the first tournament and 80th place in the second tournament. Hollowell won a $100 Wal-Mart gift card in both instances. Hollowell, a regular viewer of the “FLW Outdoors” television program, attributes his lead to his enthusiasm for bass fishing and his interest in pro bass fishing.

FLW Fantasy Fishing’s first $100,000 prize winner, Minneapolis resident Christopher Toring, did not place in the top 500 for the Lewis Smith tournament, moving from first place in the overall game to 10th place.

“The response to FLW Fantasy Fishing has been overwhelming,” said Irwin Jacobs, chairman of FLW Outdoors and creator of FLW Fantasy Fishing. “We’re attracting record numbers of players from all over the world – men and women who love fishing and fantasy sports, as well as many who are simply attracted by the huge prizes.”

Among the winners in FLW Fantasy Fishing’s first tournament, prizes were awarded to participants in Poland and South Africa. In the second tournament, 14 Australians won prizes, as well as one participant from the United Kingdom.

“With double and triple points, no one is ever out of the running for the $1 million prize,” Jacobs said. “It’s just like fishing – you never know if your next cast will be the big one.”

FLW Fantasy Fishing is free to play and is open to adults, ages 18 and up, throughout the world, wherever it is legal to play. Participants log onto fantasyfishing.com and register to enter the game. Players can sign up any time during the season, up until the Forrest Wood Cup starting Aug. 14, 2008.

Prior to each Wal-Mart FLW Tour tournament, FLW Fantasy Fishing participants select a fantasy team of 10 FLW pro anglers. Participants earn points for each tournament, based on the performance (placement in the designated tournament) of their fantasy team pro anglers. Participants can win prizes for an individual tournament as well as accumulate points over seven designated tournaments to be eligible for a $1 million cash prize, which will be awarded to the participant with the highest overall points for the season. Seven $100,000 first-place prizes go to the participants who earn the most points for each tournament. A $5 million bonus will be paid to the first player to correctly rank the top seven finishers in a tournament. Participants can subscribe to Player’s Advantage to get the edge when selecting their team by accessing expert advice, inside information and cutting-edge statistical tools.

FLW Outdoors is named after the legendary founder of Ranger Boats, Forrest L. Wood, and it conducts the following tournament circuits:

These circuits offer combined purses of more than $40 million through 230 events in 2008.

FLW is a registered trademark of FLW Outdoors, Inc. Note: For a complete list of rules for FLW Fantasy Fishing, visit fantasyfishing.com.

View Video of the Check Presentation.