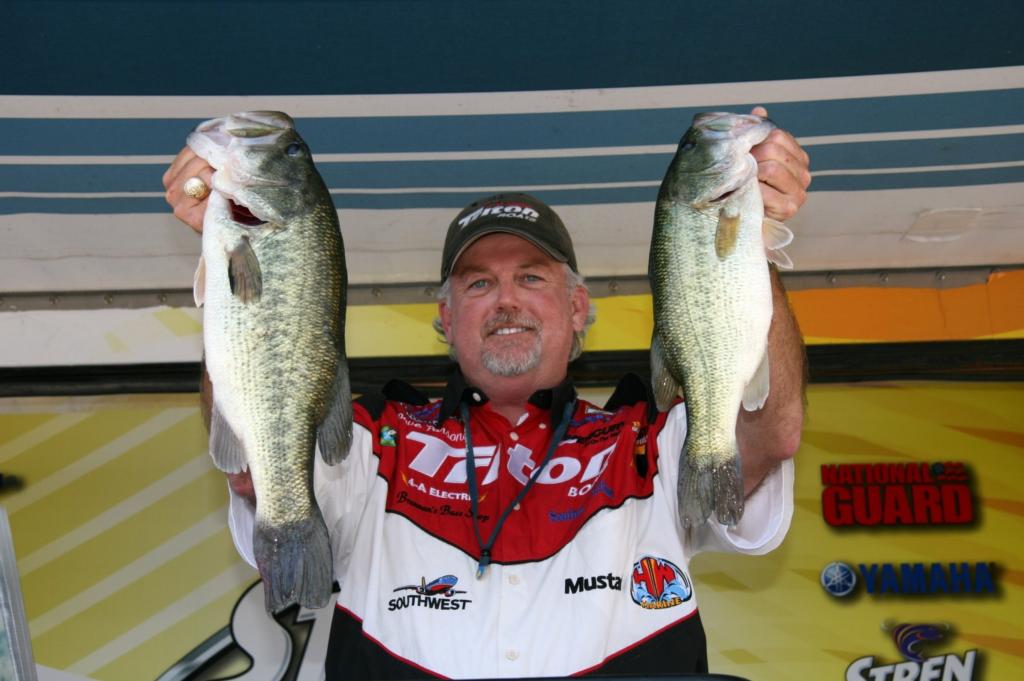 The day three bite required more effort, but Dave Parsons managed to hold onto his pro lead with another 3-pound margin. Photo by David A. Brown. Angler: Dave Parsons.
May 9, 2008 • MLF • Press Releases

DENISON, Texas – Pro Dave Parsons of Yantis, Texas, caught a five-bass limit weighing 13 pounds, 3 ounces Friday to widen his lead in the Stren Series Texas Division tournament on Lake Texoma. With a three-day catch of 15 bass weighing 45-13, he holds a 3-pound, 1-ounce lead over his closest competitor heading into the final day of competition.

“I started the day by going to where I quit yesterday,” said Parsons, who has had both the biggest bass and heaviest bag of the tournament. “The fish had moved off the structure I’d been catching them on, so I struggled a little bit and had to change gears. I think it was just because of the pressure and sunny skies, but I was eventually able to catch them a little farther out.”

Keeping the same four rods on the deck, Parsons caught his best fish this morning on a spinnerbait. Parsons said he’d caught most of his bass flipping, but had more trouble today than the previous two days of competition, not catching his fifth fish until 2 p.m.

“Tomorrow I have an all new game plan; I won’t even go back to that stuff,” Parsons said. “I might go back there late in the day to try to catch a kicker, but I’m going where I know I can put a limit in the boat early and start to cull up the rest of the day.”

Parsons had to move around a lot today and plans to go wherever he needs to tomorrow to catch a good limit.

“I’m just going to be out there grinding it out,” Parsons said. “I’m just tickled to death to be where I am, and tomorrow I’ll let the chips fall where they may.”

Stan Burgay of Timpson, Texas, earned $218 for the Snickers Big Bass award in the Pro Division thanks to a 5-pound, 12-ounce bass.

Pros are competing for as much as $65,000, including a 198VX Ranger powered by Evinrude or Yamaha if contingency guidelines are met, and valuable points toward qualifying for the $1 million Stren Series Championship in Branson, Mo., Nov. 5-8 for a shot at $140,000. After four qualifying events are complete in each of the circuit’s five divisions, the top 40 pros from each division will advance to the championship. The highest-finishing pro from each division at the championship will also earn a spot in the $2 million 2009 Forrest Wood Cup, where they will compete against top pros from the Wal-Mart FLW Tour®, Wal-Mart FLW Series®, Wal-Mart Bass Fishing League® and TBF (The Bass Federation) for bass fishing’s biggest prize – $1 million.

Tournament pros aren’t the only ones winning big this season. With the introduction of FLW Fantasy Fishing™, FLW Outdoors® offers anyone the opportunity to enter for their chance to land the catch of a lifetime with the opportunity to win $7.3 million in cash and prizes. Players can become a virtual pro angler by signing up for Player’s Advantage, providing them with exclusive insider information that could guide them to a $100,000 victory at every Wal-Mart FLW Tour® stop and the Forrest Wood Cup. Player’s Advantage will give them an edge over the competition and increase their shot for a $1 million cash grand prize that will be awarded to the FLW Fantasy Fishing cumulative points winner. Those who visit FantasyFishing.com today can sign up for Player’s Advantage and FLW Outdoors will include a $15 Wal-Mart gift card.

George Coffman of Marlow, Okla., leads the Co-angler Division in the chase for a top award of $35,000, including a 198VX Ranger if contingency guidelines are met, thanks to a three-day total of 14 bass weighing 35-04.

“I’ve fished a lot of tournaments, but this is my first with FLW Outdoors, and it’s a first-class event,” said Coffman, who is the superintendent of Marlow Public Schools in Oklahoma. “I had a blast, and I want everyone to know that.”

Coffman caught most of his fish on a crankbait and had a limit by 7 a.m.

“I culled four or five times, so I could have probably had three limits,” Coffman said. “I had a great day and partner who put me on some pretty good fish with him, and anytime you have 14-05 on Texoma is great. If I don’t catch a fish tomorrow, it’s still been a great experience.”

Francis earned $116 for the Snickers Big Bass award in the Co-angler Division thanks to a 5-pound, 6-ounce bass.

Anglers will take off at 6:30 Saturday morning from Highport located at 120 Texoma Harbor Drive in Pottsboro, Texas. Saturday’s final weigh-in will be held at the Wal-Mart store located at 401 U.S. North Highway 75 in Denison, Texas, beginning at 4 p.m. The takeoff and weigh-in are free and open to the public.

Stren Series tournaments are four-day events consisting of two rounds. The entire field competes Wednesday, Thursday and Friday. At the conclusion of Friday’s weigh-in, the field is cut to the top 10 pros and co-anglers based on the heaviest three-day accumulated weights. These anglers continue competition Saturday, with the winners determined by the heaviest accumulated weight from all four days.