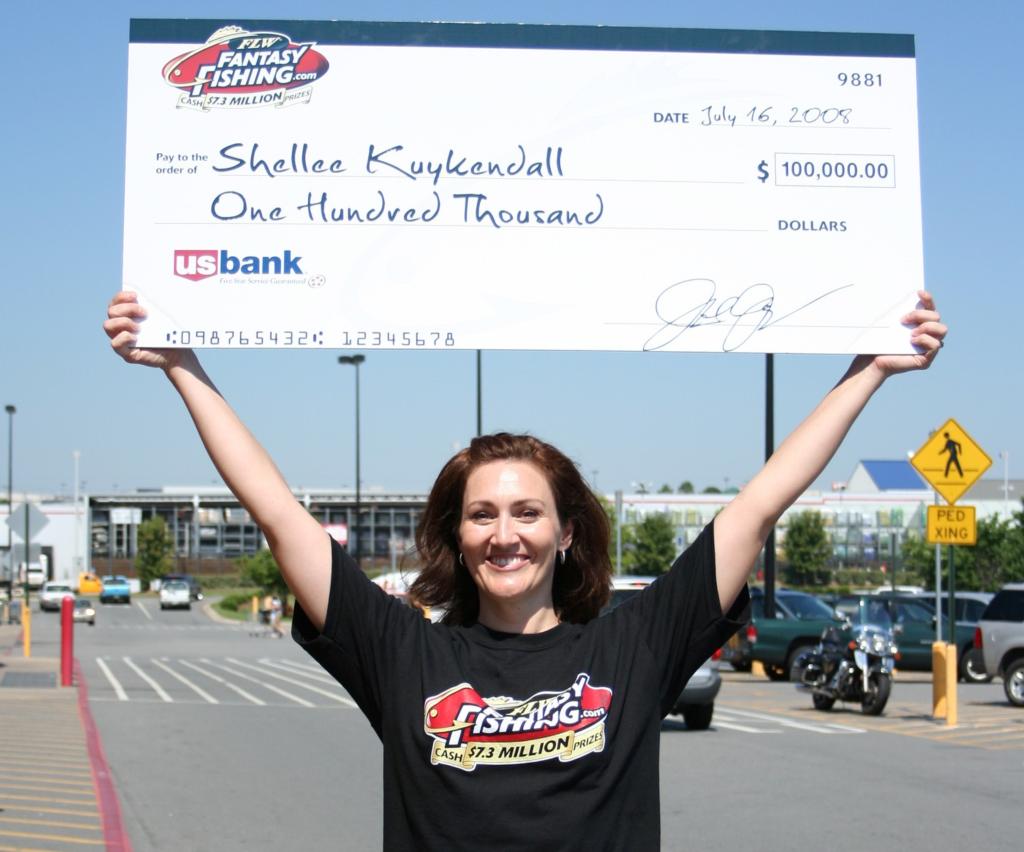 MINNEAPOLIS – Whenever Shellee (shuh-lee) Holyoak Kuykendall brought up fantasy fishing among her friends, they laughed and thought it was silly to play. Now, Kuykendall is laughing all the way to bank because she won $100,000 playing, of all things, FLW Fantasy Fishing, which features the highest payout of all fantasy sports worldwide.

Kuykendall, 35, a resident of Cabot, Ark., a suburb of Little Rock, is the second person from Arkansas to win $100,000 this summer playing FLW Fantasy Fishing. About two months ago, a 56-year-old grandfather from Rogers, Ark., Joe Collins, won $100,000 when he came in first place in FLW Fantasy Fishing’s fourth tournament. Another Arkansas resident, Suzanne Mclean of Crossett, Ark., won a $2,500 U.S. Savings Bond for coming in third place in the same tournament as Kuykendall.

“I’m stunned. I can’t believe it. This is all so crazy,” said Kuykendall. “Our friends and family won’t believe it. They know what fantasy football is, but they think fantasy fishing is silly. I think it’s going to catch on now.”

A professional artist who currently is taking some time off to raise her two sons, Kamden, 5, and Konlin, 1, Kuykendall was drawn into playing FLW Fantasy Fishing by her husband Kurtis, a director with the Arkansas Children’s Hospital in Little Rock, who is an avid angler and has played other fantasy sports in the past. The couple had just moved to Little Rock last October from the Salt Lake City area to allow Kurtis to take his job with the hospital.

Kuykendall, her husband and a group of friends formed a league called “Utahrkansas” in mid-February when Kurtis learned about the start of the FLW Fantasy Fishing season while listening to a local radio program. Though she had entered all six tournaments, this was the first time that she, or her husband, had won any prize playing FLW Fantasy Fishing. Like fantasy football but with fish, Kuykendall picked 10 professional bass anglers who participated in last weekend’s Chevy Open, a premier stop on the Wal-Mart FLW Tour that took place on the Detroit River in Detroit.

Kuykendall is now in 1,678th place overall with 14,887 points in FLW Fantasy Fishing events and is in the running for a $1 million grand prize, which will be awarded to the fantasy fishing player who accumulates the most points over the seven-tournament season, which concludes in mid-August.

While she loves fishing for trout in Utah, Kuykendall confessed that she had never caught a bass before.

“I hope that doesn’t disqualify me,” said Kuykendall, who plans to use some of her winnings to pay down the couple’s mortgage and to buy some art supplies so she can continue her passion for painting landscapes and portraits.

Using a laptop computer rather than a rod and reel, Kuykendall entered the fantasy fishing game at FantasyFishing.com, selecting 10 professional bass anglers from among the 200 pros who participate in the last FLW Tour event. Kuykendall earned points based on the real, on-the-water performance of the pros who fished the tour’s sixth, four-day tournament, the Chevy Open, which concluded last weekend on the Detroit River in Detroit. The Chevy Open was won by Kellogg’s pro Alvin Shaw, a resident of State Road, N.C. Shaw won the tournament with a total catch of 39 pounds, 11 ounces in the final two days of the competition to win a cash prize of $200,000.

Coming in second-place, with 8,094 points, was Jerry Taylor, a Sparta, Tenn., resident who won a $5,000 Wal-Mart gift card. Taylor is an avid bass angler and learned about FLW Fantasy Fishing by watching “FLW Outdoors,” a weekly program on FOX Sports Net (FSN).

“We have a new baby, so that $5,000 gift card will go a long way toward diapers and other things for our new daughter, Mabry Ashtyn,” Taylor said. “I also might pick up a few things for bass fishing, too, the next time I’m at Wal-Mart.”

Joining Kuykendall and Taylor, more than 580 other participants won prizes in FLW Fantasy Fishing’s sixth tournament for a total of 3,480 prizes awarded so far in 2008. More than 4,000 prizes totaling as much as $7.3 million will be awarded during the course of the FLW Fantasy Fishing seven-tournament season. In addition to millions in cash, other prizes such as Ranger boats; a Chevy Silverado; Yamaha and BRP ATVs and personal watercrafts; hundreds of thousands of dollars in Wal-Mart gift cards; tens of thousands of dollars of free BP gasoline and more will be awarded to the players with the highest point totals earned, based on the placement of their team of 10 professional anglers for each tournament.

“There are hundreds of prizes awarded for each tournament,” Jacobs added. “It’s just like fishing – you never know if your next cast will be the big one.”

Fantasy fishing – how it works

FLW Fantasy Fishing is free to play and is open to adults, ages 18 and up, throughout the world, wherever it is legal to play. Participants log on to FantasyFishing.com and register to enter the game. Players can sign up any time during the season, up until Aug. 13, 2008, the day before the Forrest Wood Cup championship tournament.

Prior to each Wal-Mart FLW Tour tournament, FLW Fantasy Fishing participants select a fantasy team of 10 FLW pro bass anglers. Participants earn points for each tournament, based on the performance (placement in the designated tournament) of their fantasy team pros. Participants can win prizes for an individual tournament as well as accumulate points over seven designated tournaments to be eligible for a $1 million cash prize, which will be awarded to the participant with the highest overall points for the season. Seven $100,000 first-place prizes go to the participants who earn the most points for each tournament. A $5 million bonus will be paid to the first player to correctly rank the top seven finishers in a tournament. Participants can subscribe to Player’s Advantage to get the edge when selecting their team by accessing expert advice, inside information and cutting-edge statistical tools.

The FLW Tour consists of seven tournaments, including:

FLW Outdoors is named after the legendary founder of Ranger Boats, Forrest L. Wood, and it conducts the following tournament circuits:

These circuits offer combined purses of more than $40 million through 230 events in 2008.

FLW is a registered trademark of FLW Outdoors, Inc. Note: For a complete list of rules for the FLW Fantasy Fishing, visit FantasyFishing.com.