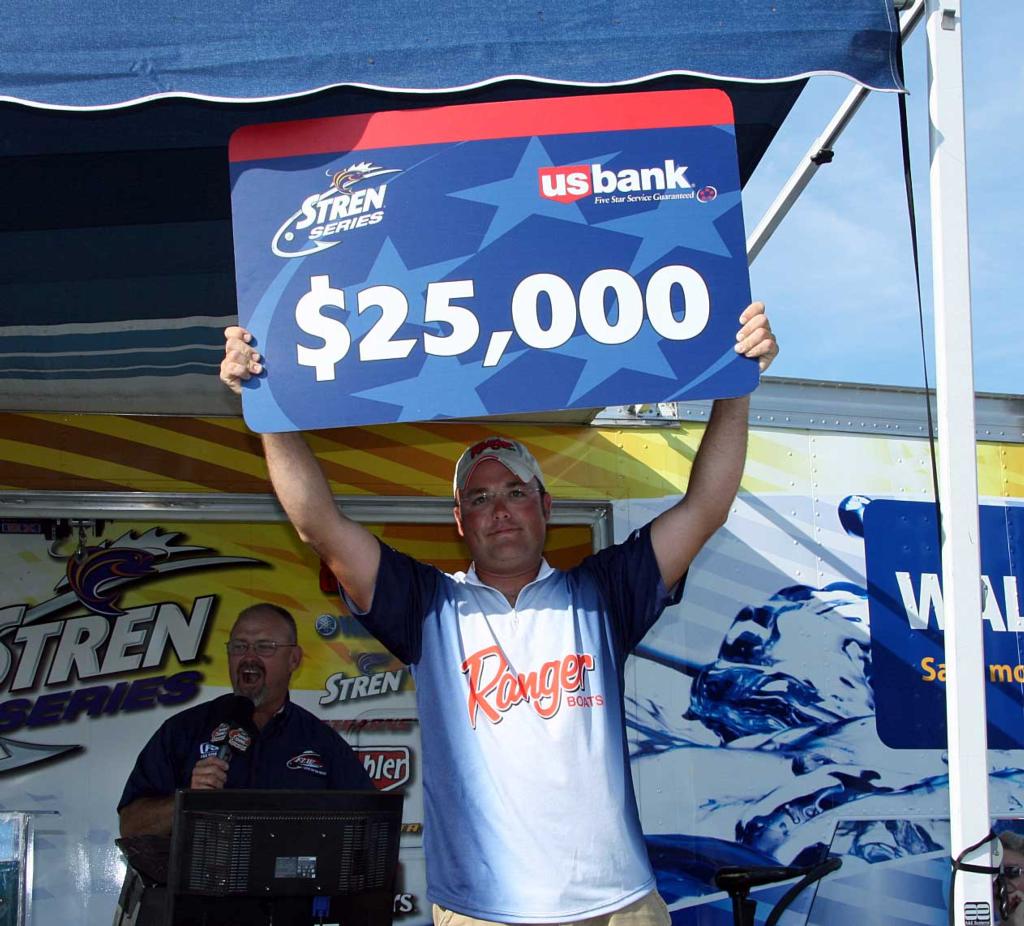 “Oh my goodness, it’s an absolutely awesome feeling; I’m overwhelmed,” said Ober, who won the co-angler division of the Stren Series Southeast Division tournament on Santee Cooper earlier this year. “To compete with great pros like Mike Iaconelli, Pete Gluszek and Chris Baumgardner is such a privilege.”

Ober stayed in the top-four throughout the tournament, but credits his co-angler for much of his success today.

“Today I caught several on a topwater bait, but my co-angler really helped me out by giving me a drop shot,” Ober said. “Drop-shotting a Speed Craw sealed the deal. I caught two fish at a quarter till 2 this afternoon, and still had to leave 30 minutes for the run back.”

Ober said he caught his fish on a crankbait in the top of the grass in about 12 feet of water earlier in the week. “I struggled and rebounded,” Ober said. “The conditions had to be just right to be able to use a topwater bait, and I had to wait until the right time to use it and get in as many casts as I could. I had to change things up today, and it paid off.”

George Lambeth of Thomasville, N.C., caught the biggest bass of the tournament in the Pro Division Friday – a 5-pound, 7-ounce bass – that earned him the day’s Snickers Big Bass award of $243.

“I used a variety of baits and switched up throughout the days,” Shafer said. “I started out on a topwater bait today, but that wasn’t working well, so I went to a drop-shot for the better part of the day, and that’s what I caught all my fish on.”

Scott Wilson of Boyds, Md., caught the biggest bass of the tournament in the Co-angler Division Friday – a 5-pound, 15-ounce bass – that earned him the day’s Snickers Big Bass award of $128.

After four qualifying events are complete in each of the Stren Series’ five divisions, the top 40 pros from each division will advance to the $1 million Stren Series Championship in Branson, Mo., Nov. 5-8 for a shot at $140,000. The highest-finishing pro from each division at the championship will also earn a spot in the $2 million 2009 Forrest Wood Cup, where they will compete against top pros from the Wal-Mart FLW Tour®, Wal-Mart FLW Series®, Wal-Mart Bass Fishing League® and TBF (The Bass Federation) for bass fishing’s biggest prize – $1 million.

Tournament pros aren’t the only ones winning big this season. With the introduction of FLW Fantasy Fishing™, FLW Outdoors® offers anyone the opportunity to enter for their chance to land the catch of a lifetime with the opportunity to win $7.3 million in cash and prizes. Players can become a virtual pro angler by signing up for Player’s Advantage, providing them with exclusive insider information that could guide them to a $100,000 victory at every Wal-Mart FLW Tour® stop and the Forrest Wood Cup. Player’s Advantage will give them an edge over the competition and increase their shot for a $1 million cash grand prize that will be awarded to the FLW Fantasy Fishing cumulative points winner. Those who visit FantasyFishing.com today can sign up for Player’s Advantage and FLW Outdoors will include a $15 Wal-Mart gift card.