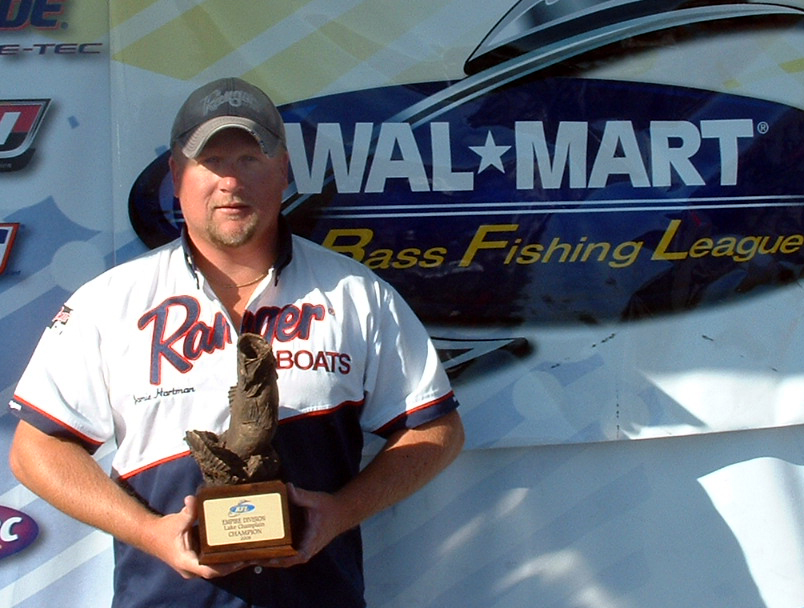 The first day of Super Tournament competition was cancelled due to inclement weather. The full field of anglers fished the second day. Hartman said he caught his limit of fish by flipping wood and weeds with a black and blue jig.

Jake Schnell of Chicago earned $2,167 as the co-angler winner thanks to five bass weighing 15 pounds, 11 ounces that he caught while fishing a Carolina-rigged crawfish in 20 feet of water.

James Mignanelli of Zelienople, Pa., earned $247 as the co-angler Big Bass winner after catching a 5-pound, 1-ounce bass that he caught drop-shotting a worm in 25 feet of water.

Following the end of regular-season competition, the top 40 boaters and 40 co-anglers based on year-end points standings in the division will advance to the no-entry-fee Albemarle Sound Regional Championship in Elizabeth City, N.C., Oct. 9-11, where they will compete against top qualifiers from three other BFL divisions. At the Regional Championship boaters will fish for a new 198VX Ranger boat and Chevy truck and co-anglers will fish for a new Ranger boat. The top six boaters and top six co-anglers at the Regional Championship will also advance to the 2009 All-American presented by Chevy. With a total purse of $1 million, a potential $140,000 cash prize going to the winning boater and as much as $70,000 going to the winning co-angler, the All-American is one of the most prestigious and lucrative events in bass fishing. The winning boater and winning co-angler at the All-American also advance to the no-entry-fee $2 million 2009 Forrest Wood Cup. This event, featuring a top award of $1 million, is the sport’s biggest championship.