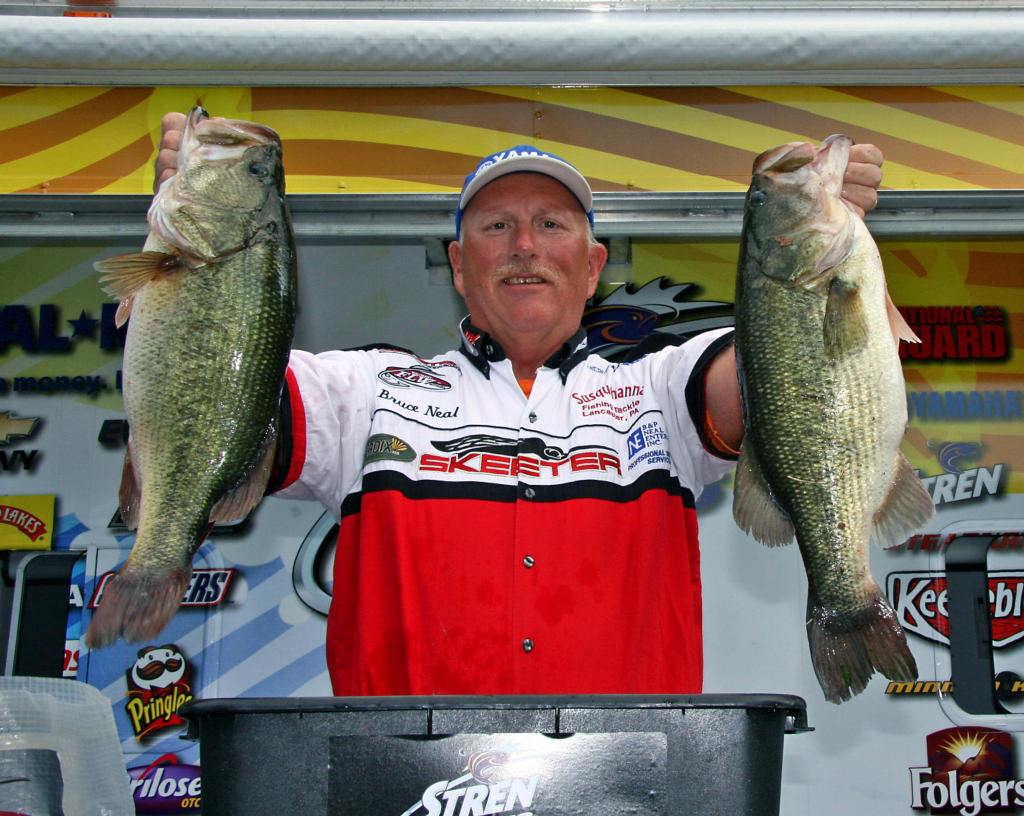 Burley Warf of Moneta, Va., earned $172 for the Snickers Big Bass award in the Pro Division thanks to a 6-pound, 12-ounce bass.

Pros are competing for as much as $65,000, including a 198VX Ranger powered by Evinrude or Yamaha if contingency guidelines are met, and valuable points toward qualifying for the $1 million Stren Series Championship in Branson, Mo., Nov. 5-8 for a shot at $140,000. After four qualifying events are complete in each of the circuit’s five divisions, the top 40 pros from each division will advance to the championship. The highest-finishing pro from each division at the championship will also earn a spot in the $2 million 2009 Forrest Wood Cup, where they will compete against top pros from the Walmart FLW Tour®, Walmart FLW Series®, Walmart Bass Fishing League® and TBF (The Bass Federation) for bass fishing’s biggest prize – $1 million.

Tournament anglers aren’t the only ones winning big this season. With the introduction of FLW Fantasy Fishing™, FLW Outdoors® offered anyone the opportunity to enter for their chance to land the catch of a lifetime with the opportunity to win $7.3 million in cash and prizes. Players could become a virtual pro angler by signing up for Player’s Advantage, which provided them with exclusive insider information that could have guided them to a $100,000 victory at every Walmart FLW Tour® stop and the Forrest Wood Cup. Player’s Advantage gave them an edge over the competition and increased their shot for the $1 million cash grand prize awarded to the FLW Fantasy Fishing cumulative points winner. Visit FantasyFishing.com today to find out more information and to register for next season.

Lynn Baciuska Jr. of Afton, N.Y., leads the Co-angler Division in the chase for a top award of $35,000, including a 198VX Ranger if contingency guidelines are met. He caught five bass weighing 17-11 while fishing with pro Aaron Hastings of Middletown, Md., who is currently in 45th place.

“I caught most my fish early this morning,” said Baciuska, who is currently ranked 12th in the Stren Series Northern Division points race. “All of my bites came fishing topwater baits fishing mats.

“Tomorrow, my partner is a local so I am very excited about that. He also likes to fish mats as well so I feel right at home.”

Baciuska earned $101 for the Snickers Big Bass award in the Co-angler Division thanks to a 6-pound, 2-ounce bass.

Anglers will take off at 7:30 each morning from Smallwood State Park located at 2750 Sweden Point Rd. in Marbury. Thursday and Friday’s weigh-in will be held at the marina beginning at 3 p.m. Saturday’s weigh-in will be held at the Walmart store located at 40 Drury Drive in La Plata, Md., beginning at 4 p.m. Takeoffs and weigh-ins are free and open to the public.

Stren Series tournaments are four-day events consisting of two rounds. The entire field competes Wednesday, Thursday and Friday. At the conclusion of Friday’s weigh-in, the field is cut to the top 10 pros and co-anglers based on the heaviest three-day accumulated weights. These anglers continue competition Saturday, with the winners determined by the heaviest accumulated weight from all four days.