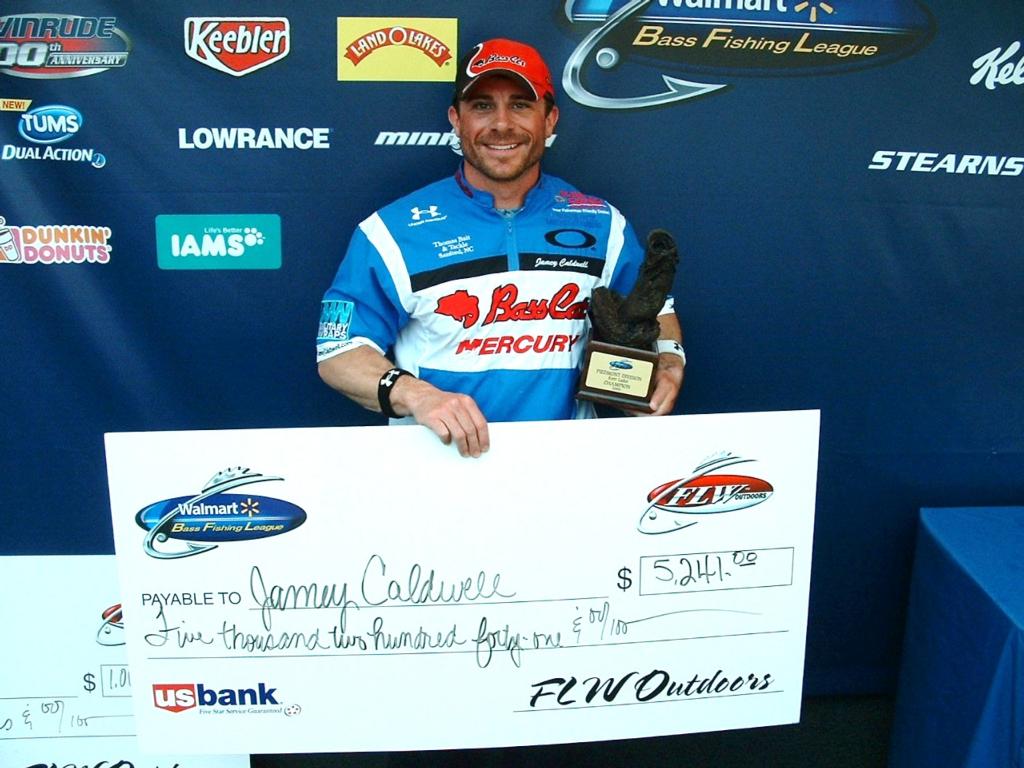 HENDERSON, N.C. – Jamey Caldwell of Carthage, N.C., won the Wal-Mart Bass Fishing League Piedmont Division tournament on Kerr Lake Saturday with a five-bass catch weighing 15 pounds, 5 ounces. The victory earned Caldwell $5,241 and placed him one step closer to qualifying for the Potomac River Regional Championship in Marybury, Md., Oct. 8-10, where he could ultimately win a new Ranger boat and a Chevy truck.

“While I was getting ready to weigh in, I heard the tournament director calling weights and they were low,” said Caldwell. “I heard 15-2 as the current winning weight. I still wasn’t sure I could win it but knew then I had a good chance.”

The day started off very well for Caldwell, fishing the lower lake on points with a Lucky Craft jerkbait. He caught two bass weighing 8 pounds by 8:30.

“I was on a good pattern and knew it would take 20 pounds at least to win,” Caldwell said. “Since the wind picked up, I shut the pattern down and made an adjustment. I used the same technique but started fishing in grass.”

The Fish were withdrawn, making it harder to find them. With the day heating up, he found 62-degree water and the fish in shallow water.

Caldwell said, “I had 10 minutes to weigh-in, so I mentally put myself in the game and made the fish bite and caught a 2 1/2-pound bass and culled out the 1-pounder I had.” That fish, he said, is what gave him the win.

“The guy checking the fish confirmed to me I was at least in the top three. The checker covered the weight number so I couldn’t see and then took his hand away and announced I was the new leader,” Caldwell said. 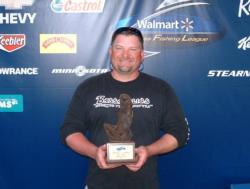 Hunter Campbell of Henderson, N.C., earned $2,614 as the co-angler winner Saturday thanks to five bass weighing 11 pounds, 13 ounces that he caught on a spinnerbait.

The next Piedmont Division event will be held on the Jordan Lake in Apex, N.C., April 4.

The top 40 boaters and 40 co-anglers in each of the BFL’s 28 divisions at the end of the season advance to a no-entry-fee Regional Championship where boaters fish for a new Ranger boat and a Chevy truck and co-anglers fish for a new Ranger boat. Seven regional championships will each send six boaters and six co-anglers to the no-entry-fee Wal-Mart BFL All-American presented by Chevy, which features a $1 million purse and a top award of $140,000 in the Boater Division and $70,000 in the Co-angler Division. Anglers who compete in all five regular-season events within a division but do not advance to a Regional Championship are eligible to compete in the Chevy Wild Card, which will also send six boaters and six co-anglers to the All-American for a total of 48 boaters and 48 co-anglers advancing through BFL competition.

The winning boater and winning co-angler at the All-American will advance to the no-entry-fee 2010 Forrest Wood Cup in Atlanta in 2010. This event, featuring a top award of $1 million, is the most lucrative tournament in all of competitive bass fishing. In all, the BFL offers weekend anglers the opportunity to qualify for three no-entry-fee championships with total cash awards exceeding $3.5 million. Plus, the top 40 boaters and 40 co-anglers from each BFL division may move up to the Stren Series™ for 2010 while All-American champions have the option to advance directly to the Wal-Mart FLW Tour®.