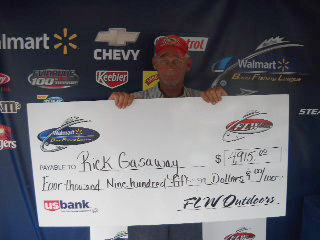 LANETT, Ala. – Rick Gasaway of Marietta, Ga., won the Walmart Bass Fishing League Bulldog Division tournament on West Point Lake Saturday with a five-bass limit weighing 14 pounds even. The victory earned Gasaway $4,915 and placed him one step closer to qualifying for the Lake Seminole Regional Championship in Bainbridge, Ga., Oct. 22-24, where he could ultimately win a new Ranger boat and a Chevy truck.

Gasaway said he caught the majority of his bass by a black and blue jig in 10-12 feet of water off banks in Potato Creek. 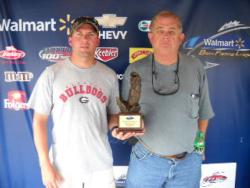 Scott Laughman of Acworth, Ga., and Ray Perkins of Blakely, Ga., tied for first place and each earned $1,852 as the co-angler winners Saturday thanks to four bass for Laughman and two bass for Perkins weighing 9 pounds, 2 ounces.

Perkins earned $372 as the co-angler Big Bass winner with a 7-pound, 12-ounce bass he caught on a Zoom Ultra-Vibe Speed Worm rigged on a shaky-head jig head.

The next Bulldog Division event will be held on Lake Eufaula in Eufaula, Ala., June 20.