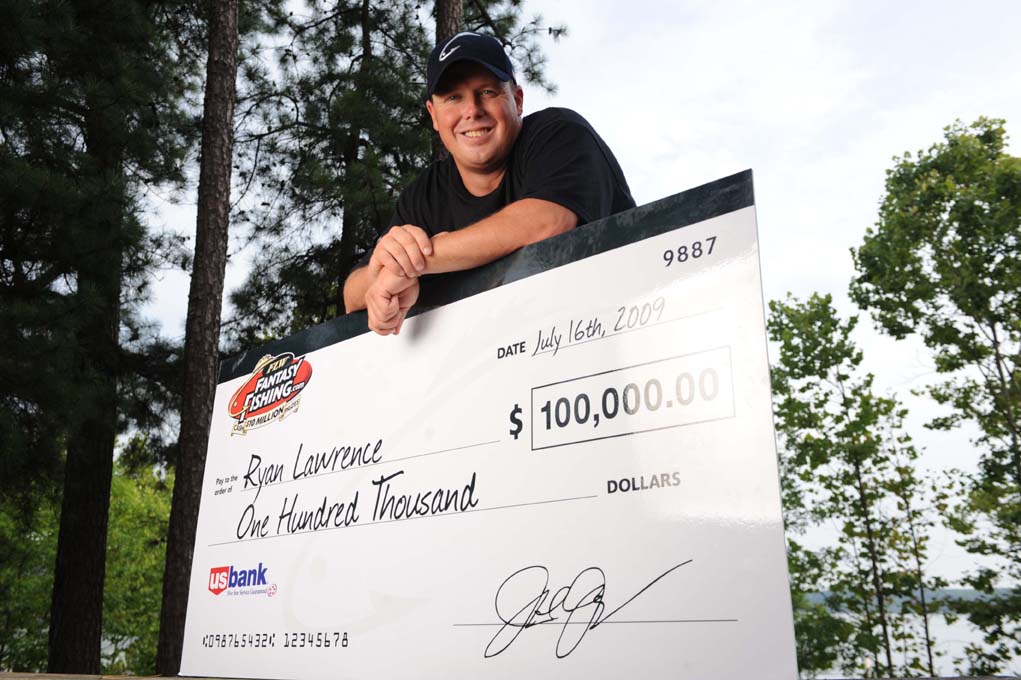 Ryan Lawrence, a resident of Marietta, Ga., won $100,000 for picking the best FLW Fantasy Fishing team for Lake Champlain. Of the 10 pros he picked, an astounding six finished in the top 10, and Lawrence also correctly picked the winner.
July 16, 2009 • MLF • Archives

MINNEAPOLIS – A little more than a year from now, Georgia will host the world’s richest professional bass-fishing tournament, the 2010 Forrest Wood Cup presented by BP and Castrol, on Lake Lanier near Atlanta. The world’s best professional bass anglers will square off in the final tournament of the Walmart FLW Tour’s season and compete Aug. 5-8, 2010, in the world championship of bass fishing with its $1 million grand prize.

For bass-fishing junkies like Ryan Lawrence, a resident of nearby Marietta, Ga., the coming of the Forrest Wood Cup to Atlanta can’t come soon enough. It’s a dream come true to get up close and center to your favorite bass pros. That’s because when he’s not pouring concrete, Lawrence thinks about just one thing – bass fishing. He eats, sleeps and breathes bass fishing, religiously following the advice of pro heroes such as Team National Guard pro Scott Martin and Team Chevy pro Luke Clausen, while entertaining the fantasy of catching the big one someday.

Well, Lawrence’s bass-fishing fantasy has just come true, but not exactly in the way he thought. Instead of reeling in the 10-pound bass he’s always dreamed of catching on nearby Lake Allatoona, Lawrence can brag about an even bigger catch – $100,000 that he won for coming in first place playing FLW Fantasy Fishing. Lawrence is the first FLW Fantasy Fishing player from the Atlanta area to win a major prize in the international online game.

Playing FantasyFishing.com from the comfort of his home office, Lawrence, the owner of a small concrete construction company, selected 10 professional bass fishermen who competed in the sixth tournament of the 2009 FLW Tour bass-fishing season. Picking bass pros whom he regularly follows on weekend bass-fishing television programs, Lawrence, 37, submitted his fantasy team just prior to the start of last weekend’s FLW Tour event on Lake Champlain near Plattsburgh in upstate New York. It was the fifth FLW Fantasy Fishing tournament that Lawrence had entered this year at FantasyFishing.com, a game played in 123 countries around the world.

Earning points based on the performance of the bass pros that he picked, just like fantasy football or baseball, Lawrence scored more than 21,000 points when he picked the first-place finisher of the Lake Champlain bass tournament, as well as the anglers who finished in sixth place (Team Kellogg’s pro Dave Lefebre) and eighth place (Team M&M’s-Snickers pro Greg Pugh). His exacta picks earned him huge bonus points on top of the points he earned by selecting a total of six bass pros who finished in the top 10. For his first-place selection, Lawrence picked National Guard bass pro Scott Martin, a resident of Clewiston, Fla., who won the FLW Tour tournament, presented by Folgers, at Lake Champlain and its $125,000 prize with 10 bass for a final-round total weight of 36 pounds, 4 ounces.

Like a fisherman who relies on his confidence baits, the fishing lures that rarely let you down, Lawrence said he went to those bass pros with whom he had the most confidence in winning the final regular-season tournament of the 2009 FLW Tour – names such as Scott Martin, Luke Clausen, Team Chevy Pro Larry Nixon, Team Walmart pro George Cochran, Team Folgers pro Scott Suggs and Team Chevy pro Anthony Gagliardi.

A native of Ft. Madison, Iowa, Lawrence dreams of getting a new bass boat with his prize money to replace the bass boat he bought four years ago. But it’s likely that his wife, Stacy, will have first say on his $100,000 prize.

“I’d love a new Ranger bass boat,” Lawrence said, “but I think my wife has her eye on a new kitchen. And she’s also hinting that it’s time to expand our family.”

While Lawrence and his wife may have to “sleep on” what they’ll eventually do with their prize winnings, one thing they know they’ll do for sure is take their two daughters to Walt Disney World in Orlando, Fla.

$1 million grand prize to be awarded Aug. 1 in Pittsburgh

All eyes in the world of fantasy fishing and fantasy sports are now turning to Pittsburgh. On Aug. 1, 2009, as part of the 2009 Forrest Wood Cup championship tournament activities, FLW Outdoors will name the champion of the 2009 FLW Fantasy Fishing season who will win the $1 million grand prize.

The 10 fantasy fishing players who have accumulated the most points over FLW Fantasy Fishing’s tournament season, which is based on the six tournaments of the Walmart FLW Tour, will be invited to the $1 million FLW Fantasy Fishing award ceremony at Mellon Arena in Pittsburgh. The FLW Fantasy Fishing player who has accumulated the most points over the entire season will be named champion and will receive a check for $1 million. The other top nine point finishers also will receive major prizes, which include a Ranger Z20 Comanche bass boat powered with an Evinrude engine (second place), a Ranger Reata fish and ski boat powered by an Evinrude engine (third place), a Chevrolet Malibu sedan (fourth place) and a $25,000 Walmart gift card (fifth place).

The Forrest Wood Cup is the final event in the FLW Tour season. To catch all of the action at the Forrest Wood Cup, watch FLWOutdoors.com as well as the “FLW Outdoors” television program, which is broadcast in high definition (HD) on VERSUS, the network that brings anglers the best fishing programming on television, featuring the most trusted authorities on the water. The Emmy-nominated “FLW Outdoors” airs each Sunday from 12:30 to 1:30 p.m. Eastern time.

FLW Outdoors, named after Forrest L. Wood, the legendary founder of Ranger Boats, is the largest fishing tournament organization in the world and is offering anglers the chance to win more than $33 million through 231 tournaments in 2009. For more information about FLW Outdoors and its tournaments, visit FLWOutdoors.com or call (270) 252-1000. For more information about FLW Fantasy Fishing and Player’s Advantage, visit FantasyFishing.com.