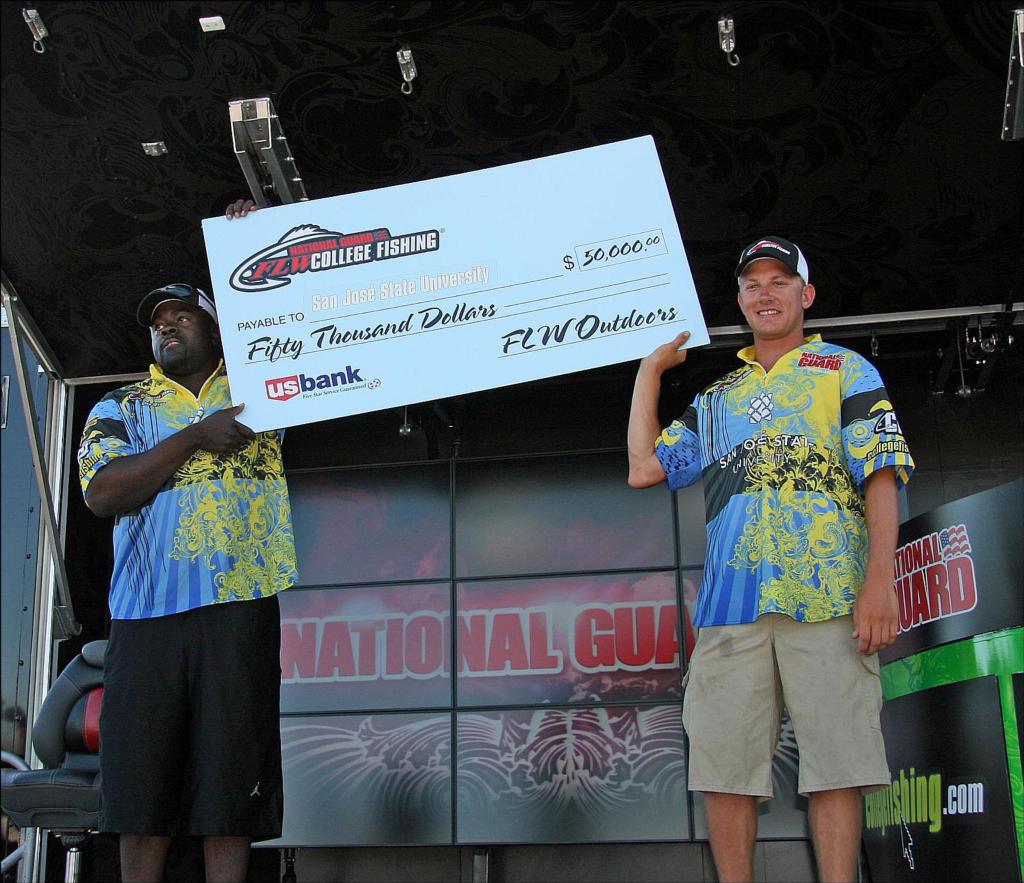 STOCKTON, Calif. – The San Jose State University team of Glen Wyatt of Vallejo, Calif., and Eric Andersen of San Jose, Calif., led wire-to-wire and won the National Guard FLW College Fishing Western Division Regional event on the California Delta Monday with six bass weighing 11 pounds, 9 ounces for a three-day total of 17 bass weighing 37-10. For their efforts, the team won a Ranger 177TR with a 90-horsepower Evinrude or Yamaha outboard wrapped in school colors and $25,000 for the school they represent.

“This really makes you feel great,” said Andersen, who recently graduated with a business marketing degree. “We prefished and it paid off, and we got the late bite and it was dramatic every day. If feels great to just be here right now.”

Wyatt said the team relied on finesse worms fished slowly throughout the tournament for their daily catches. While other teams tried power fishing or topwater techniques, the San Jose State team stuck with the slow but sure method – and it paid off to the tune of $50,000.

“We figured everybody else would be throwing big stuff,” Wyatt said. “It’s fall time and everybody’s trying to beef up, so we downsized. It was too hot. They didn’t want the big stuff. They wanted the small stuff.

“We went out and practiced every day and just listened to the fish,” Wyatt added. “They’ll tell you what they want.”

“This guy is the fish whisperer, man,” Andersen said. “He tells me what the fish are talking about. I just do what he says.”

“I’m looking forward to fishing with the top in the nation and getting out to Tennessee,” Andersen said.

“The best is in the west,” Wyatt added. “Let’s get that straight.”

FLW Outdoors announced the College Fishing trail in May 2008. The entire schedule, which is organized around the five Stren Series Divisions, can be found by visiting CollegeFishing.com along with rules, requirements and information on how to create a bass club.

Full-time students enrolled in four year colleges or universities are eligible to participate in the events. Schools can send two-person teams to each of the four qualifying events in their division, with each event limited to a maximum of 40 teams. Each team has the opportunity to win $10,000 for first and $2,000 through fifth place. Prize money is split evenly between the winning team’s club and the school they represent. The tournaments are free to enter, boats and drivers are provided and all collegiate teams receive a travel allowance. The top five teams in each qualifying event advance to one of five televised three-day National Guard FLW College Fishing Regional Championships.

The National Guard FLW College Fishing National Championship is a three-day televised event hosting the top five teams from each regional, 25 total teams. Teams will be provided shirts and wrapped Ranger boats towed by Chevy trucks for this competition. The purse for the championship ranges from $25,000 cash and a Ranger 177TR with a 90-horsepower Evinrude or Yamaha outboard wrapped in school colors for the winning club and $50,000 for the school they represent to $15,000 for fifth, split between the club and school.

Coverage of the National Guard FLW College Fishing Western Division Regional event on the California Delta will be broadcast in high-definition (HD) on VERSUS, the network which brings anglers the best fishing programming on television featuring the most-trusted authorities on the water. The Emmy-nominated “FLW Outdoors,” will air Oct. 18 from 12:30 to 1:30 p.m. ET. “FLW Outdoors,” hosted by Jason Harper, is broadcast to approximately 500 million households worldwide, including internationally through agreements with WFN (World Fishing Network) and Matchroom Sport to such countries as Canada, Germany, China, South Africa, Australia, Malaysia, Russia, Hungary and the United Kingdom, making it the most widely distributed weekly outdoor-sports television show in the world.

FLW Outdoors, named after Forrest L. Wood, the legendary founder of Ranger Boats, is the largest fishing tournament organization in the world. FLW Outdoors also has taken fishing mainstream with FLW Fantasy Fishing, offering the largest awards possible in the history of fantasy sports, $10 million in cash and prizes. Sign up for Player’s Advantage for only $10 to get your edge and win.