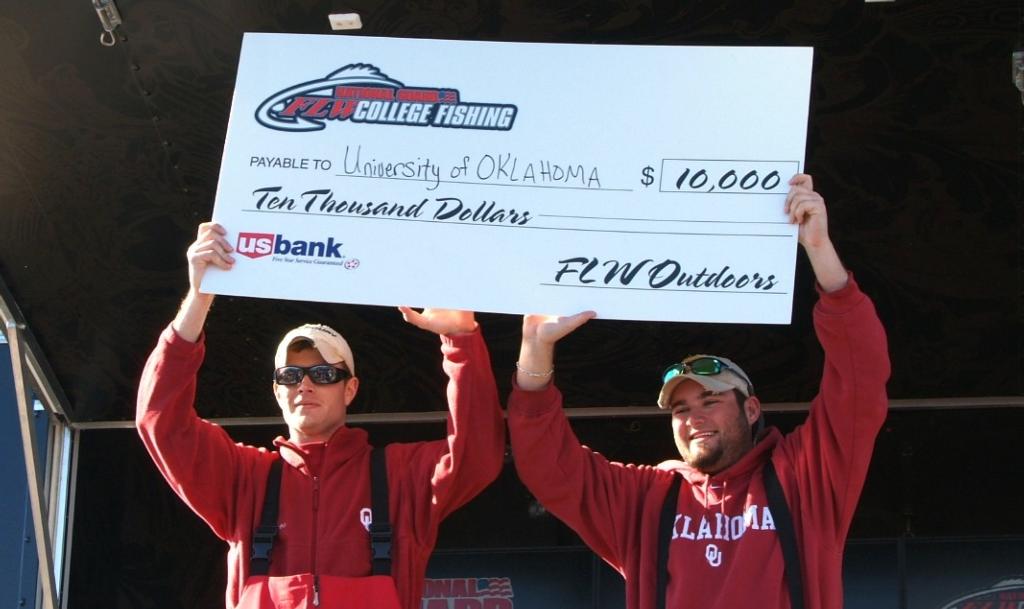 ZAPATA, Texas – The University of Oklahoma team of Mark Johnson and Chip Porche won the National Guard FLW College Fishing Texas Division event on Falcon Lake Saturday with six bass weighing 34 pounds, 8 ounces. The victory earned the team $10,000 to be split evenly between the university and the university’s bass-fishing club. The win also helped them advance to the Texas Division Regional Championship, where they could ultimately win a Ranger 177TR with a 90-horsepower Evinrude or Yamaha outboard wrapped in school colors for their school’s club and $25,000 for the school they represent.

“This is amazing,” said Johnson. “Chip and I just had an incredible day, this is great a lake. We caught all our fish using a black angel with a football jig, we only had nine keepers all day, but they were the ones we needed.

“Chip and I have been fishing together for about two and a half years and this is our first victory together; we have been close a couple of times, but never won – it’s awesome!”

Despite the brutal cold conditions Johnson and Porche were able to maintain their composure, settle down and turn in a good sack of fish. They knocked one good fish off with the net, but were able to come back from that mistake and fish a nearly flawless day.

“It was just our day,” said Porche. “Like Mark said, we have been fishing together for over two years

and I think the fact that we were able to work as a team made the big difference in our victory. FLW college tournaments are set up so that both anglers have to catch fish; that is different from a lot of other tournaments and some teams, especially the ones with young inexperienced anglers, aren’t able to make that adjustment.” 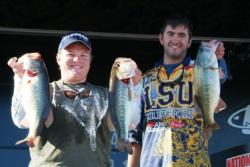 colleges or universities are eligible to participate in the events. Schools can send two-person teams to each of the four qualifying events in their division, with each event limited to a maximum of 40 teams. Each team has the opportunity to win $10,000 for first through $2,000 for fifth place. Prize money is split evenly between the winning team’s club and the school they represent. The tournaments are free to enter, boats and drivers are provided by FLW and all collegiate teams receive a travel allowance. The top five teams in each qualifying event advance to one of five televised three-day National Guard FLW College Fishing Regional Championships.

The top five teams from each regional championship will advance to the National Guard FLW College Fishing National Championship.

The National Guard FLW College Fishing National Championship is a three-day televised event hosting the top five teams from each regional, 25 total teams. Teams will be provided shirts and wrapped Ranger boats towed by Chevy trucks for this competition.

The winning team will be declared the National Guard FLW Collegiate National Champion and will qualify for the 2011 Forrest Wood Cup. The winners will also receive use of a wrapped boat and Chevy truck for cup competition.