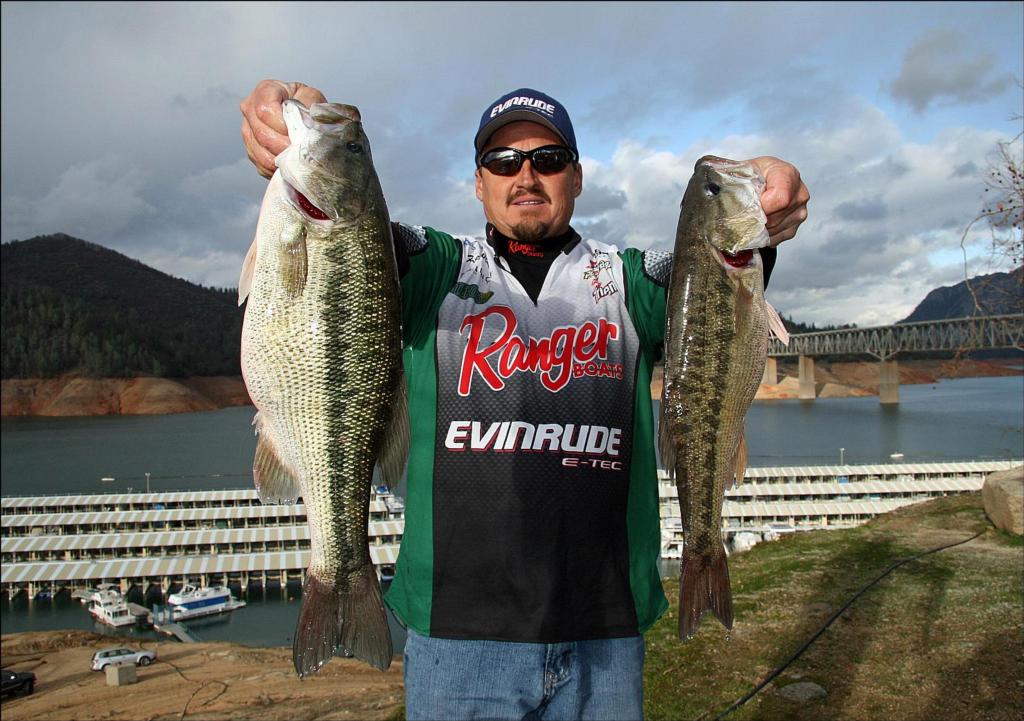 REDDING, Calif. (Jan. 13, 2010) – Ken Wick of Star, Idaho, landed 5 bass weighing 12 pounds, 6 ounces Wednesday to lead day one of the FLW Series National Guard Western Division tournament on Lake Shasta. He holds a narrow 2-ounce lead in a tournament where anything can happen, featuring 140 pros and 140 co-anglers from 13 states and Japan.

“The wind was a huge factor for me today,” said Wick, who has an ever so slight advantage going in to day two. “The success of my fishing really evolved around the channel swings and when the wind came up it pushed the shad in to shallower water bringing the bigger bass with them.”

Unlike most of the more successful anglers today, Wick caught his fish in 8-9 feet of water. Many of today’s anglers were reporting greater success in water depths of 35 – 40 feet and some even deeper.

Right behind Wick is local angler Chris Fancelli of Redding, Calif., who trails in the No. 2 spot by just ounces with 5 bass weighing 12-4.

And indeed it was as he landed the number three spot with 5 bass weighing 12 pounds after all weights were tallied.

Rounding out the remainder of the top-10 pros after day one at Lake Shasta are:

Pros are competing this week for a top award of over $48,500 plus valuable points in the hope of qualifying for a shot at the 2011 Forrest Wood Cup.

“I had a great pre-fish,” said Walker, who has close to a 2 pound advantage in the co-angler division. “I knew the big ones were out there it was just a matter of finding them today. I was going for the big bite using large senkos, I started with 5 inches but kept increasing my size as the day went on. We were in about 40 feet of water and I was using 12 pound test line, there was no finesse today.”

Co-anglers are competing this week for a Ranger 177TR with a 90 horsepower engine as well as valuable points that could help them qualify for a shot at the 2011 Forrest Wood Cup.

Fans will also be treated to a Family Fun Zone at the mall prior to Saturday’s weigh-in from noon to 4 p.m. There will be a drawing for a $500 mall gift card and drawings for rod and reel combos will be take place every 30 minutes during the event. Activities in the Family Fun Zone include a Ranger boat simulator and assorted fishing-themed games. All activities are free and open to the public.

Coverage of the Lake Shasta tournament will be broadcast in high-definition (HD) on VERSUS. “FLW Outdoors” will air April 11 from 12:30 to 1:30 ET. “FLW Outdoors,” hosted by Jason Harper, is broadcast to approximately 500 million households worldwide.