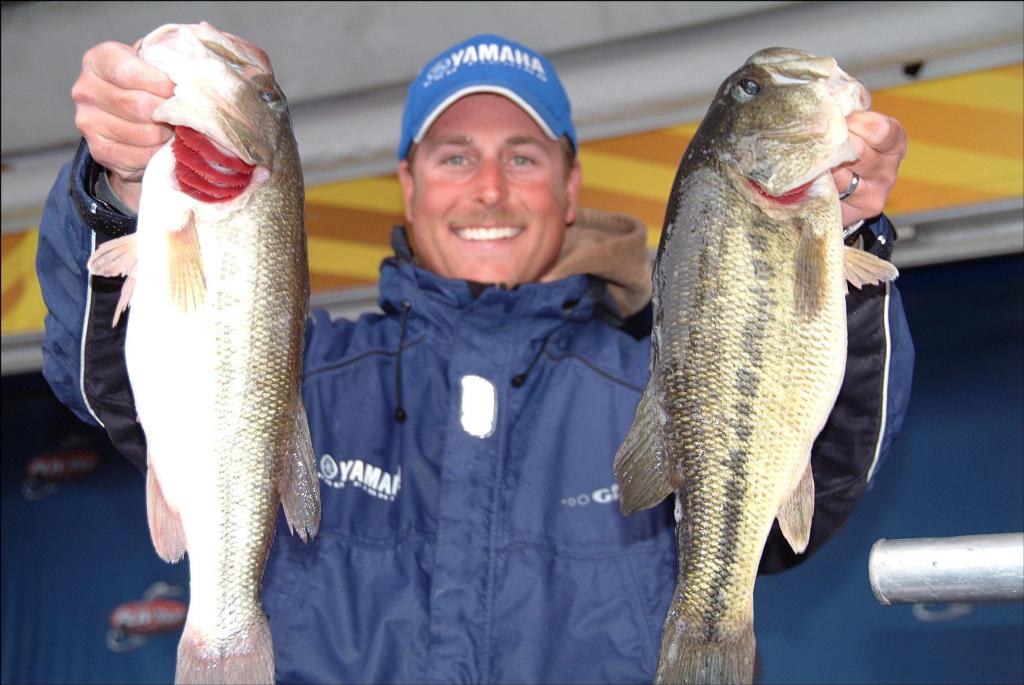 CHARLOTTE, N.C. – Pro Bryan Thrift of Shelby, N.C., crossed the stage Friday with a five-bass limit weighing 16 pounds even to boost his 15-bass three-day weight total to 45 pounds, 10 ounces and to extend his lead in the FLW Tour event presented by the National Guard on Lake Norman. Thrift now holds a 5-pound, 2-ounce lead over second-place pro Rusty Trancygier of Hahira, Ga., who has a three-day total of 15 bass for 40-8.

“I’m very happy to have a lead like that out here, because this is a lake where you’re going to struggle to find that one fish to make up that 5-pound lead,” said Thrift, who has won more than $467,000 in FLW Outdoors competition. “I’m feeling really good about it. If I can catch 10 pounds tomorrow, somebody’s got to catch a 15-pound bag to beat me. And that’s definitely doable, it’s just a little bit hard sometimes.”

Thrift said after he catches his limit, he concentrates on areas and tries to “pick it apart” in an effort to catch a bigger largemouth. Thrift said every day he’s been able to catch a kicker fish. He said his limit he weighed on the third day of competition came on a combination of baits – two fish fell for a crankbait and three ate a jig. Thrift said if the sun shines on Saturday’s final day of competition he might have difficulty catching fish on a crankbait.

“I’m as nervous as I’ve ever been,” Thrift said. “I would really love to win this tournament. I think if I had a 15-pound lead I’d still be nervous.”

Trancygier admitted he faced a tough final day of competition but planned to stick to what had been successful for him the first three days.

“I don’t really think I can change anything I’ve been doing,” Trancygier said. “I caught 20 to 25 keepers today. I just never got a big bite. My co-angler had a 6 1/2-pounder in the first 30 minutes. If I could have gotten a big bite like that, I could have made it really interesting.”

Trancygier said he slowed his presentation down and caught fish on a Senko Wednesday when it was sunny, but as the clouds and rains moved in on following days, he found success on a shallow-running crankbait and a spinnerbait.

“I’ve been in 2 feet of water or less the whole time,” Trancygier said.

Rounding out the top five pros and advancing to the final day of competition are:

Rounding out the top 10 pros are:

Pros are competing for a top award of up to $125,000 this week plus valuable points in the hope of qualifying for the Forrest Wood Cup which will be held Aug. 5-Aug. 8 at Lake Lanier in Atlanta, Ga., where they could win as much as $600,000 – the sport’s biggest award.

“I had the best draws I could ever have,” said the 22-year-old Palaniuk, who is fishing in his rookie season of FLW Tour competition. Previous to this victory, Palaniuk’s career winnings totaled $500. “I fished with Bud Pruitt today and he would actually turn the back of the boat and let me fish the docks before he ever made a cast. I can’t say how much I appreciate that to him.”

Palaniuk said his key bait for the tournament was a Yamamoto Senko and he caught fish on it all three days of competition.

Rounding out the top five Co-anglers are:

Freeman also won a $2,500 gift card as part of the new Cabela’s Angler Cash program. Beginning in 2010, Cabela’s is offering pro and co-anglers the opportunity to register and win a $2,500 gift card for being the highest qualified finisher in each division at all FLW Tour events, making the stakes even higher in an already rich award package. Anglers can visit FLWOutdoors.com for a complete list of rules and to register.

Anglers will take off from Blythe Landing located at 15901 N.C. Highway 73 in Cornelius, N.C., at 7:15 Saturday morning. Saturday’s final weigh-in will be held at the Cabarrus Arena & Events Center located at 4751 Highway 49 North in Concord, N.C., beginning at 4 p.m.

Fans will be treated to a Family Fun Zone & Outdoor Expo at Cabarrus Arena & Events Center on Friday from 5 – 9 p.m. and Saturday prior to the final weigh-in from 10 a.m. – 4 p.m. There will be a drawing for a Can-Am ATV compliments of 99.7 the Fox and rod and reel combos will be given to the first 300 kids under 14 in attendance on Saturday. The Family Fun Zone & Outdoor Expo includes Ranger boat simulators, the opportunity to interact with professional anglers, enjoy interactive games, activities and giveaways provided by sponsors, and learn more about the sport of fishing and other outdoor activities. All activities are free and open to the public. For a full schedule of events, additional information and to register for the ATV, visit FLWOutdoors.com/ngopen.

Coverage of the Lake Norman tournament will be broadcast in high-definition (HD) on VERSUS. “FLW Outdoors,” will air May 2 from 12:30 – 1:30 p.m. ET. “FLW Outdoors,” hosted by Jason Harper, is broadcast to approximately 500 million households worldwide.