CHATTANOOGA, Tenn. – The Georgia Southern team of Wesley Maples and Jed Thigpen won the final qualifying National Guard FLW College Fishing Southeast Division event on Lake Chickamauga Saturday with six bass weighing 12 pounds, 3 ounces. The victory earned the team $10,000 to be split evenly between the university and the university’s bass-fishing club. The win also helped them advance to the Southeast Division Regional Championship where they could ultimately win a Ranger 177TR with a 90-horsepower engine wrapped in school colors for their school’s bass club and $25,000 for the school they represent.

“It actually, surprisingly went according to plan today,” said Maples, a senior geography major. “It’s one of the first times that’s ever happened.

“We originally thought we were going to go to the grass and possibly get some on a frog, but that didn’t pan out,” Maples added. “So we abandoned that and went deep the rest of the day.”

Thigpen said he came into the Chickamauga event with hopes of qualifying for the Southeast Regional.

“That’s all I wanted to do,” said Thigpen, a junior biology major. “I would have been as happy with a fifth-place finish, but to get here and come in first is unreal. It really hasn’t hit me yet.

“It’s incredible what FLW and the National Guard have done with this (series), Thigpen added. “This is hard to beat. This is awesome.”

Rounding out the top five teams and also qualifying for the Southeast Regional Championship are: 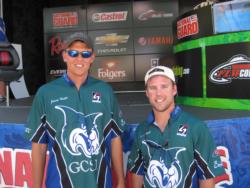 The National Guard FLW College Southeast Regional Championship is scheduled for Oct. 21-23, at Lake Monroe in Orlando, Fla. The three-day tournament will be hosted by the University of Central Florida and will be televised on VERSUS Nov. 21 from 12:30 to 1:30 EST.

Also qualifying for the Southeast Regional: 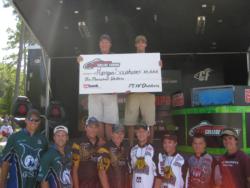 College Fishing is free to enter, boats and drivers are provided by FLW Outdoors and all collegiate teams receive a travel allowance. For a complete list of tournament results visit collegefishing.com.