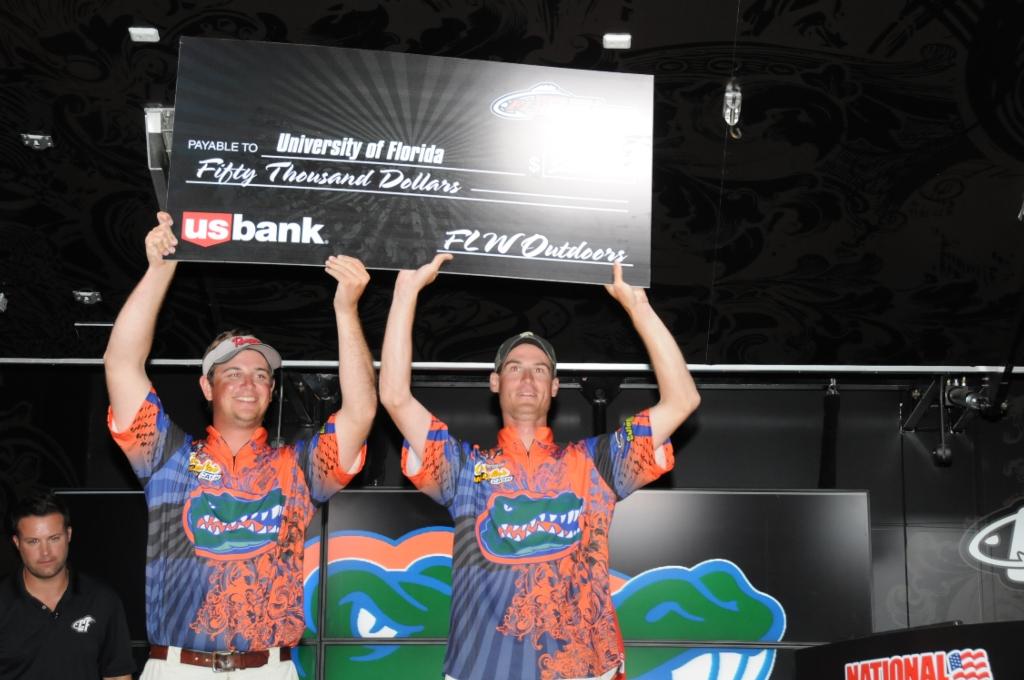 Jake Gipson and Matthew Wercinski of the University of Florida win their second Southeast Regional Championship with a three-day total of 38 pounds, 10 ounces. All total, this is their fourth College Fishing victory and they have banked over $200,000 for the Gators. Photo by Rob Newell. Angler: Matthew Wercinski.
October 23, 2010 • MLF • Abu Garcia College Fishing

ORLANDO, Fla. – The University of Florida’s Jake Gipson and Matthew Wercinski, both of Niceville, Fla., squeaked out a victory, for the second year in a row, at the National Guard FLW College Fishing Southeast Division Regional Championship on Saturday with three bass that weighed 5 pounds, 7 ounces. The Gator duo caught a total of nine bass weighing 38-11 to win a top prize of $50,000, which includes a Ranger boat and outboard wrapped in school colors for the winning club and $25,000 for the school they represent. They have now qualified for the National Guard FLW College Fishing National Championship where they will once again be defending their title.

The three day tournament which took place on Lake Monroe really challenged the top 20 college teams from around the southeast region. Only seven, six fish limits were caught during the tournament, including two on the final day. The Gators had a 12 pound, one ounce lead going into the final day of competition and managed to hold on to their lead to win by only 3 pounds, 7 ounces over second place Kennesaw State University – Jake Akin, Powder Springs, Ga., and Thomas Frink, Kennesaw, Ga. who had a three day total of 15 bass weighing 35-3 to take home $25,000.

“It’s great to be back! There was a little bit of pressure having that big lead going into today,” said Jake Gipson, a senior in Industrial and Systems Engineering. “We were fortunate to come out on top and you can see we really struggled today.

“The meat of our fish came flipping walls of grass in the river. Most of them came off a Gambler Flappin’ Tail. We covered a lot of water and fished fast,” added Gipson.

We came back to defend our title and that’s what we fished for,” said Matthew Wercinski, a senior in Business. “We don’t fish for limits, we fish for big fish and that’s how you win tournaments. I was really nervous coming to the stage today without any fish, but fortunately Jake caught his limit and brought it home for us.

“This is just unbelievable!”

Rounding out the top five teams and also qualifying for the national championship are:

A complete list of results can be found at www.CollegeFishing.com.

Each school team represented in the televised regional championship have team shirts and boats provided by Ranger. The purse for each regional championship includes a Ranger 177TR with a 90-horsepower Evinrude or Yamaha outboard wrapped in school colors for the winning club and $25,000 for the school they represent.

The top five teams from each regional championship, 25 teams total, will advance to the 2011 National Guard FLW College Fishing National Championship that will be hosted by Murray State University on Kentucky Lake, April 7-9. The National Championship is a three-day televised event. Teams will be provided jerseys and wrapped Ranger boats towed by Chevy trucks for this competition. The first-place team will win $100,000 with $50,000 of that for their school and $25,000 cash and a Ranger 177TR bass boat for their fishing club along with a berth in the 2011 Forrest Wood Cup.

Coverage of the National Guard FLW College Fishing Southeast Division Regional Championship tournament on Lake Monroe will be broadcast in high-definition (HD) on VERSUS. “FLW Outdoors”, and will air Nov. 21 from 12:30 to 1:30 ET. “FLW Outdoors,” is hosted by Jason Harper, and is broadcast to approximately 500 million households worldwide.