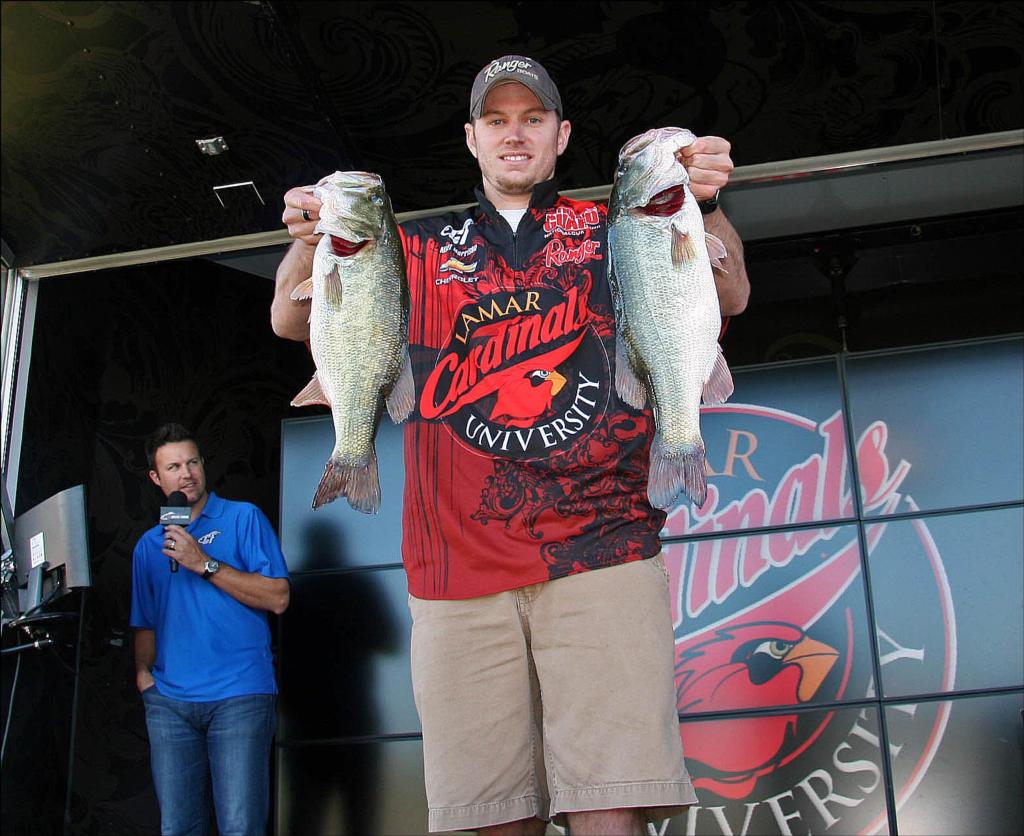 NACOGDOCHES, Texas – Matt Morrison of Silsbee, Texas, and Danny Iles of Hemphill, Texas, hold the lead after day one at the National Guard FLW College Fishing Texas Division Regional Championship on Sam Rayburn Reservoir with six bass weighing 17 pounds, 14 ounces. The team has a slim 12-ounce lead over the Stephen F. Austin team of Blaze Platt of Weatherford, Texas, and Ryan Watkins of Nacogdoches, Texas, going into day two of competition where they are competing for a top prize of $50,000 and qualifying for a shot at the National Championship.

“Our trolling motor cable broke yesterday, so we had to work something out there to fix that,” Morrison said. “Today was completely different. We just went out and threw our baits around.”

“Our club started three years ago,” Iles said. “We’re not as big as some schools, but we like to feel we’re as competitive as any school.”

High winds gave many of the teams fits as the day progressed, and many voiced their wishes onstage for calmer waters and heavier weights on the second day of competition. However, the top teams remained close, with only 4 pounds, 3 ounces separating first place from fifth.

Rounding out the top five teams are:

Each school team represented in the televised regional championship have team shirts and boats provided by Ranger. The purse for each regional championship includes a Ranger 177TR with a 90-horsepower Evinrude or Yamaha outboard wrapped in school colors for the winning club and $25,000 for the school they represent. Awards of $6,000 extend through fifth place for the club and school to split evenly.

Anglers will take off from Cassels-Boykin Park located at FM Road 3123 in Zavalla, Texas, at 7:30 a.m. each morning. Weigh-ins will be held at Stephen F. Austin State University – Homer Bryce Stadium. Friday’s weigh-in will begin at 4 p.m. and Saturday’s final weigh-in will begin at 5 p.m. Takeoffs and weigh-ins are free and open to the public.

Stephen F. Austin State University will also be hosting a College Fishing Festival throughout the three-day tournament. Students and fishing fans alike will be treated to live music, the National Guard Warrior Challenge, a Ranger Boat simulator, tailgate games, a sports zone along with contests for cash and several prize give-aways. The festival will take place at Stephen F. Austin State University – Homer Bryce Stadium from 2-4 p.m. Friday and 11 a.m.-2 p.m. on Saturday.

The remaining qualified teams in the Texas Regional Championship include:

The top five teams from each regional championship, 25 teams total, will advance to the 2011 National Guard FLW College Fishing National Championship that will be hosted by Murray State University on Kentucky Lake, April 7-9, 2011. The National Championship is a three-day televised event. Teams will be provided jerseys and wrapped Ranger boats towed by Chevy trucks for this competition. The first-place team will win $100,000 with $50,000 of that for their school and $25,000 cash and a Ranger 177TR bass boat for their fishing club along with a berth in the 2011 Forrest Wood Cup.

Coverage of the National Guard FLW College Fishing Texas Division Regional Championship tournament on Sam Rayburn will be broadcast in high-definition (HD) on VERSUS. “FLW Outdoors”, and will air Dec. 5 from 1 to 2 ET. “FLW Outdoors,” is hosted by Jason Harper, and is broadcast to approximately 500 million households worldwide.