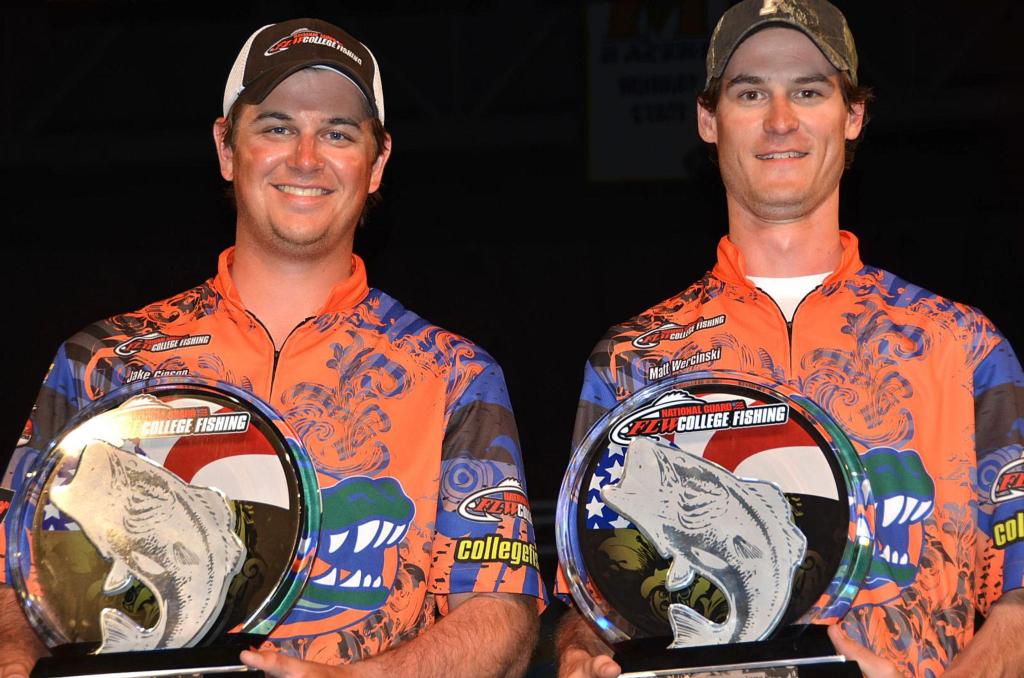 MURRAY, Ky. – The University of Florida team of Jake Gipson and Matthew Wercinski, both of Niceville, Fla., weighed a five-bass limit totaling 14 pounds, 4 ounces Saturday to win their second National Guard FLW College Fishing National Championship title in as many years, a rare feat in any collegiate sport. Their three day total of 15 bass weighing 41-8 on Kentucky Lake gave them a 4-pound, 6-ounce margin of victory over the Louisiana State University-Shreveport team of Zach Caudle, Shreveport, La., and Joe Landry, West Monroe, La.

“This is a little unbelievable,” said Gipson, who has a degree in industrial and systems engineering. “After the practice we had we weren’t sure if we would be able to repeat as champions. We had a lot of confidence coming here having won one title, but the bad practice really shook us.

“The key to this week was Matt and I keeping our heads down and fishing hard all week. We struggled today and really had to grind it out to win,” Gipson went on to say. “Kentucky Lake is an amazing fishery. The sheer number of big bass is dumbfounding. There are so many different options to catch them too. This lake really didn’t show itself, but that was mostly because of the TVA (Tennessee Valley Authority) releasing water and dropping the levels so the fish were pretty confused.

“Matt told me that this was the last tournament he was going to fish with me so I knew we had to make it a good one,” Gipson added.

The duo from Florida has enjoyed an incredible run. They have won back-to-back College Fishing Southeast Regional Championships and have been crowned national champions two years in a row. To date they have earned $315,000 for their school in just two years, which includes four Ranger bass boats.

“Jake got me started fishing tournaments about five years ago and we have had a good run,” said Wercinski, who has a degree in business. “Winning tournaments, getting the adrenaline rush, setting the hook on that one kicker fish that you know will win the tournament for you is an awesome feeling.

“We knew it was going to take five fish a day to win,” Wercinski went on to say. “We started each morning shallow targeting rip rap. I was throwing a brush hog and Jake was using a Strike King KVD 1.5 and sexy shad. After the morning bite died, we moved to secondary pea gravel points using a jig to reel `em in. Words cannot describe the feeling, this is amazing!”

The University of Florida has also qualified for the 2011 Forrest Wood Cup presented by Walmart Aug. 11-14 on Lake Ouachita in Hot Springs, Ark. The team will receive use of a wrapped boat and Chevy truck for Cup competition.

Rounding out the best of the rest:

The national championship awards the top team with $50,000 cash, a Ranger 177TR with a 90-horsepower engine wrapped in school colors for their school’s bass club and $25,000 for the school they represent. FLW Outdoors has awarded over $2 million in scholarship money to over 100 colleges and universities. College Fishing events are free to enter, boats and drivers are provided by FLW Outdoors and all collegiate teams receive a travel allowance.