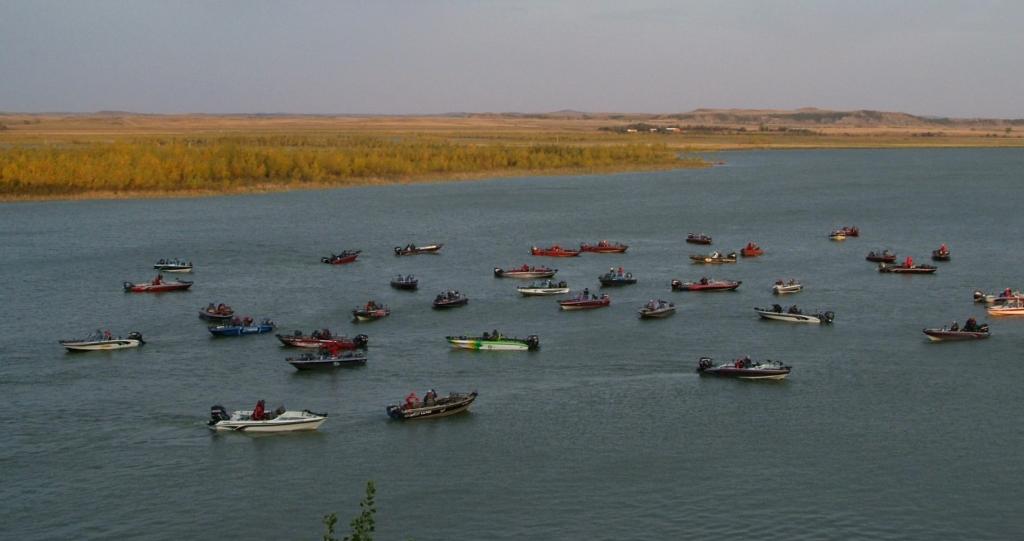 Day one of the 2009 FLW Walleye Tour Championship began under partly cloudy skies. While the scene at takeoff looks tranquil, southeast winds of up to 30 mph are forecasted. Photo by Brett Carlson.
September 8, 2011 • MLF • Press Releases

BISMARCK, N.D. – The National Guard FLW Walleye Tour Championship is headed to the Missouri River in Bismarck, N.D., Sept. 22-25. Hosted by the Bismarck-Mandan Convention & Visitors Bureau, the championship tournament will feature the top 40 walleye anglers in each of the Pro and Co-angler divisions; they will compete for top awards of up to $70,000 in the Pro Division and $12,000 in the Co-angler Division.

“The water is coming down right now on the Missouri River, and a lot will change between now and the championship,” said National Guard pro Mark Courts of Harris, Minn., who has qualified for his fifth consecutive championship. “We just need some cooler weather to make the bite get really good.

“Bait selection is going to be wide open. You will see guys rigging live bait, jigging and trolling with either crankbaits or spinners,” continued Courts. “I think the trollers are going to have the upper hand because they are going to be moving in search of active fish.

“The fish are starting to move off the banks and upriver, feeding on those baitfish, so the guy that moves up in the river and stays on the schooling fish as they move north is going to be the guy that has a good chance of winning. I think you will see weights like we saw when we were here in 2008 when it took over 62 pounds to win. It is going to take an average of 15 to 16 pounds daily to win with at least one 20-pound bag in the mix.

“This is going to be a fantastic championship. This is a great field and any guy could win.”

Courts went on to say that right now the big fish are not there, but they could get there in a hurry with some cooler temperatures. It is all about timing; fall is coming, and the fish are feeling it.

Anglers will take off from Hazelton Camp Ground and Access Area located 31 miles southeast of Bismarck on Highway 1804 in Bismarck at 8 each morning. Weigh-ins will be held at the Bismarck Civic Center located at 315 S. 5th St. in Bismarck beginning at 5 p.m.

Format for this tournament will be the full field of 40 pros and 40 co-anglers fishing the first two days. On day three the top 20 in each division will fish, and a co-angler champion will be crowned. On Sunday, the final day, the field drops down to the top 10 pros fishing for the title.

Fans will be treated to the FLW Outdoors Expo at the Bismarck Civic Center on Saturday and Sunday, Sept. 24 and 25, from 1 to 5 p.m. prior to weigh-ins. The Expo includes Ranger boat simulators, free seminars, the opportunity to interact with professional anglers, enjoy interactive games, activities and giveaways provided by sponsors, and learn more about the sport of fishing and other outdoor activities. The first 300 kids 14 and under on Sunday will receive a free Zebco rod and reel combo compliments of 103.3 US Country. All activities are free and open to the public.

Walleye Tour pro anglers will also be on hand to sign autographs, take pictures and talk fishing to fans of all ages prior to the championship event when Kupper Chevrolet, located at 1500 2nd St. NE in Mandan hosts Chevy Pro Night Tuesday, Sept. 20, from 6 to 8 p.m. Scheduled to appear are Chevy pro Jason Przekurat, National Guard pros Mark Courts and Bill Shimota plus other FLW professional walleye anglers.

Coverage of the FLW Walleye Tour Championship will be broadcast in high-definition (HD) on VERSUS. “FLW Outdoors” and will air Nov. 13 from 1 to 2 p.m. ET. “FLW Outdoors,” hosted by Chip Leer, is broadcast to more than 500 million households worldwide.