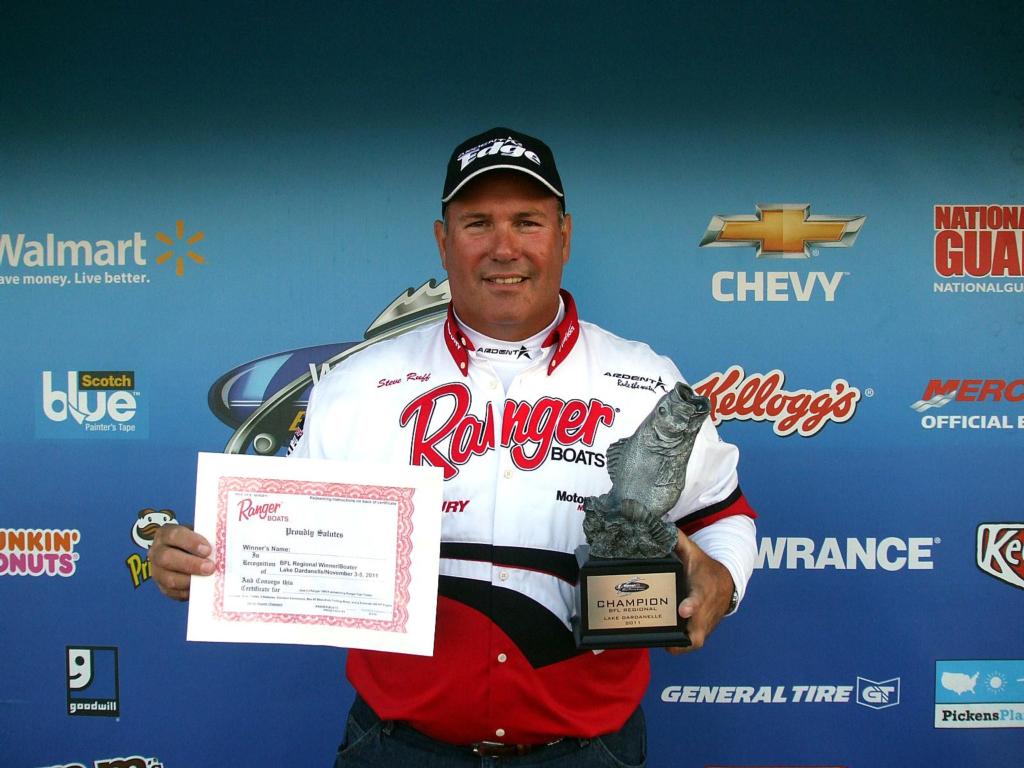 Boater Steve Ruff of Wentzville, Mo., earned a Ranger boat with an outboard engine along with a Chevy truck as the winner of the Walmart BFL Regional on Lake Dardanelle. Angler: Steve Ruff.
November 5, 2011 • MLF • Archives

RUSSELLVILLE, Ark. – Steve Ruff of Wentzville, Mo., won the Walmart Bass Fishing League (BFL) Regional on Lake Dardanelle Saturday with a three-day total of 15 bass weighing 40 pounds, 4 ounces. For his victory, Ruff won a 198VX Ranger boat with a 200-horsepower Evinrude or Mercury outboard motor plus a Chevy 1500 Silverado and a berth in the BFL All-American presented by Chevy. This regional tournament featured the top 40 boaters and 40 co-anglers from the Cowboy, LBL, Okie and Ozark divisions of the Walmart FLW BFL circuit.

“I didn’t have a lot of knowledge about the lake,” said Ruff. “I had only been there a handful of times before, most recently was about six years ago. I tried to do as much homework as I could because I knew that it was a hazardous place to run, being on the river system and having a reputation for a lot of stumps.

“I spent two days there before the official off-limits period just learning how to run the place,” Ruff continued. “It wasn’t until the official practice period that I got a real feel for the fish. During practice I found four areas that had a high concentration of fish that were about 20 miles apart. They were a little farther apart than I would have liked, but not having intimate knowledge of the lake, I was lucky to have found these areas.

“The first day was pivotal for me,” Ruff went on to say. “The weather was treacherous: 25 mile-per-hour winds, 5-foot swells. It was brutal. I couldn’t even get to two of my four areas, and I only had one fish by noon. I was just trying to keep myself in the game when I finally decided to move to my last area. With 20 minutes left to fish, I finally caught my fifth and sixth bass. I decided then that this last area would be my primary spot for the rest of the tournament.

“The fishing changed every day,” Ruff went on. “I think it was my ability to adapt and change that made the difference for me and making the right decisions at the right time. I let the bass tell me how to fish. I started every day with a crankbait. On the second day I had my limit by 10:30, and knew I needed to upgrade, so broke out the Alabama rig and swimbaits. That was another pivotal move for me. But it was really my ability to adapt and change that won the tournament for me.”

The remaining top six boaters who also qualified for the BFL All-American: 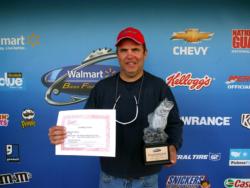 James Waller of Cypress, Texas, won the Co-angler Division with a three-day total of seven bass weighing 19 pounds, 1 ounce. He took home a 198VX Ranger boat including a 200-horsepower Evinrude or Mercury outboard motor along with a berth in the BFL All-American presented by Chevy.

The remaining top six co-anglers who also qualified for the BFL All-American: