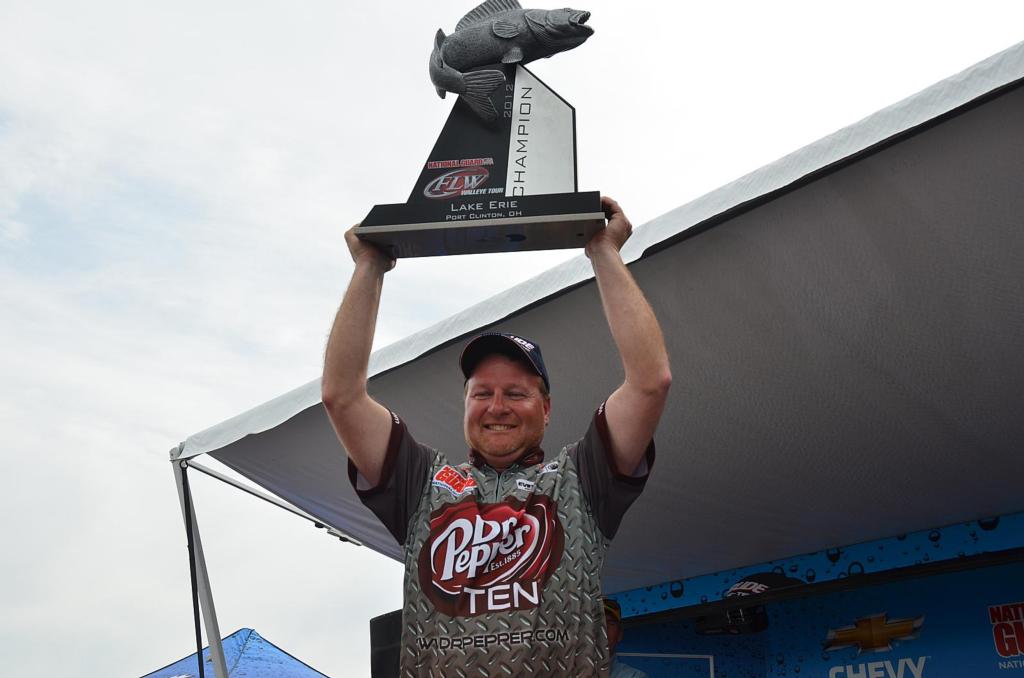 “Winning this event is just awesome,” said McQuoid who upped his FLW career winnings to more than $350,000. “You can’t ever take away the feeling of winning your first tournament, but to win my third and join Dean and Bill as the only guys to win three, well that feels pretty special. I’ve fished more than 50 tournaments with FLW and this was really only the third time I’ve ever had a shot at winning one. I’m running on 100 percent adrenaline right now. Life is good!

“Today started out a little slower than Thursday and Friday,” McQuoid continued. “The first two days of the tournament I had an awesome weight by 9 a.m. I did get one solid 9-pounder right away about 7:30 a.m. this morning, but then it slowed down and we were catching peanuts. A lot of other places a 4-pound walleye would be a pretty nice fish, but out here on Lake Erie, they are peanuts. I did get a little bit nervous, but we just kept grinding it out and we made the right adjustments. It ended up being a pretty solid day right on through. It really helped to have a co-angler like Jimmy Cox. He is awesome. I didn’t have to tell him how to do anything. We just talked back and forth today and really made a great team.

“I was running pretty much the same pattern throughout the whole week,” McQuoid continued. “I was running a break line on the east side of Kelly’s Island about 30 feet deep. I was throwing in-line spinners with 1-ounce weights, using blade sizes of No.#5 and No.#6. Every day was a little different for hot colors, but I had the most success with a gold back and white, pink, purple and a little bit of chartreuse on the front. I just kind of ran a different gamut of colors between the beads and the blades, and I kept them about 40 to 50 feet behind the planer boards. I traveled to this event with a couple of other guys, Mark Courts, Jason Przekurat and Scott Steil, and working together really makes a huge difference out here.”

Minutes after earning the victory, McQuoid was already looking forward to the next event on the 2012 FLW Walleye Tour schedule.

“I’m really looking forward to fishing Lake Oahe,” he said. “That’s a reservoir where you can do a lot of trolling. Last year when we were out there we were trolling some treetops and it was won with spinnerbaits, but there were a lot of fish coming out with Rapala Husky Jerks and Lindy Rigging with live bait as well. There’s just so many different ways that you can catch fish out there. It will make for a really interesting tournament.”

Final results for the top 10 pros on Lake Erie are:

Jimmy Cox of Bono, Ark., earned the victory in the Co-angler division to take home $8,500. He posted a three-day weight of 15 walleyes totaling 115 pounds, 12 ounces.

“I am so happy right now,” said Cox, who is now atop the standings for 2012 Co-angler of the Year. “I would say for a co-angler, 20 percent of winning these tournaments is based on skill and 80 percent is based on who you get partnered with. I had some really fantastic partners this week. If you want to see what true teamwork is all about, watch Kevin and I when this show airs. He’s such a gentle, kind spirit, and it was an absolute pleasure to be out on the water with him today. This trophy will make the long drive back to Arkansas that much better.”

Final results for the top 10 co-anglers on Lake Erie are:

Coverage of the Lake Erie tournament will be broadcast in high-definition (HD) on NBC Sports Network when “FLW” airs October 7 from 1 – 2 p.m. ET. “FLW” is hosted by Chip Leer and is broadcast to more than 559 million households worldwide, making it the most widely distributed weekly outdoors-sports television show in the world.

The next National Guard FLW Walleye Tour event will be held on Lake Oahe on July 12-14 in Pierre, S.D. The event will be hosted by the Pierre Area Chamber of Commerce and boats will launch from Spring Creek Resort & Deep Water Marina. For a complete schedule visit FLWOutdoors.com.