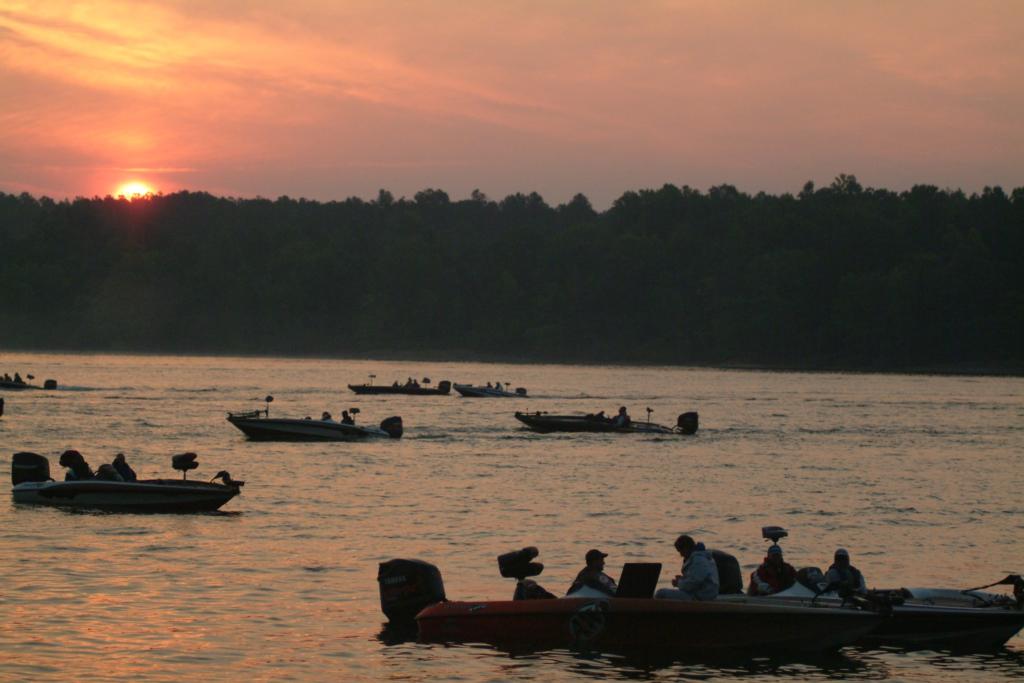 Anglers prepare for day two of the Northeastern Stren Series on Kerr Lake as the sun peeks over the horizon. Photo by Rob Newell.
June 7, 2012 • MLF • Press Releases

“Anglers are going to have to be willing to adapt to conditions for this one,” said FLW Tour pro David Wolak of Wake Forest, N.C. “The TVA regulates the water levels and depending on where they need power will determine how much water they will be releasing. This is the craziest lake I have ever seen with fluctuations in water levels. You are really going to have to stay on top of the water movement.

“Look for the topwater bite on flats to be a winning pattern,” Wolak continued. “Shallow and mid-depth cranking post-spawn areas should produce as well. Twelve- to 14-pound bags are pretty typical right now on Kerr Lake; I would guess that 14 or 15 pounds will win it.

Anglers will take off from Nutbush Park located at 115 Jack Wade Farm Road in Henderson, N.C., at 6:30 a.m. Saturday. Weigh-in will be at the marina beginning at 1 p.m. Takeoff and weigh-in are free and open to the public.

Schools competing in the Kerr Lake tournament, which is being hosted by the Vance County Tourism Department, include:

Four regular-season qualifying events are held in each conference – Central, Northern, Southeastern, Southern and Western. The top five teams from each qualifying tournament will advance to one of five televised three-day National Guard FLW College Fishing Conference Championships, where the first-place team wins a Ranger 177TR bass boat with a 90-horsepower Evinrude or Mercury outboard. The top five teams from each conference championship advance to the national championship.