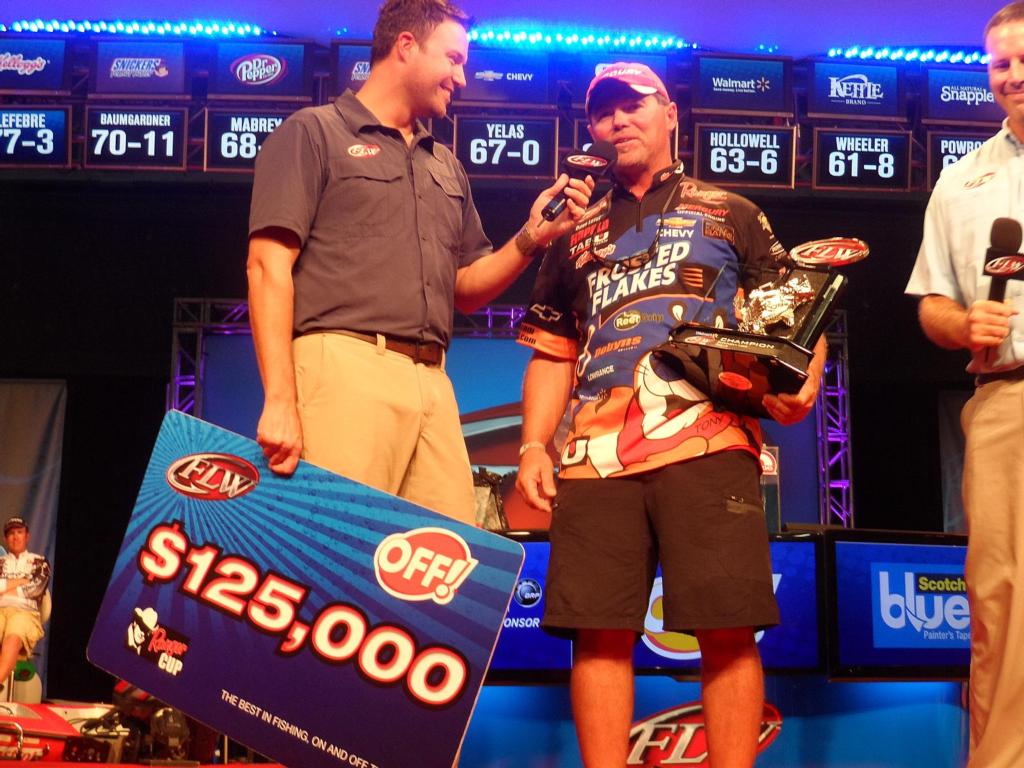 On Saturday, Kellogg’s Frosted Flakes pro Dave Lefebre of Erie, Pa., weighed 23 pounds, 15 ounces of bass – the heaviest limit of fish at the FLW Tour on Kentucky Lake presented by OFF!. Lefebre didn’t duplicate that effort Sunday, but it turns out he didn’t need to. At the end of the day, Lefebre’s five bass worth 19 pounds, 5 ounces gave him a total four-day weight of 77 pounds, 3 ounces as well as a championship trophy and $125,000.

“This feels good,” said Lefebre, who hasn’t won an FLW Tour event since 2004. “I can’t believe it because the Potomac (River) and (Lake) Champlain are the two I look at and say, `Those are the ones I have a chance to win.’ And after the Potomac, where I let one get away, this one is a shocker to me.”

Lefebre said he started the final day of competition the way he had previous days – about a mile from the takeoff ramp fishing a swimbait. In past days, he fished that area until he had a limit at about 8:30 a.m., but on Sunday the bite wasn’t as good and he left the spot with three fish at 7:30 and made a 12-mile run to look for more fish. He fished a Tabu 1-ounce brown jig with purple tinsel tipped with a green-pumpkin Yamamoto trailer on ledges and inlets into the main river channel.

“The wind had calmed down just a little bit and I was able to make the exact cast I wanted to make,” Lefebre said. “It was substantially different conditions, and I think it was the first cast that I caught the 5 1/2 (pounder).

Lefebre said he caught 15 to 20 keepers during the course of the day, and his three biggest fish he weighed Sunday came on a swimbait and the other two were caught on a jig.

The remaining top 10 pros finished the tournament in:

The Tour stop on Kentucky Lake presented by the OFF! was hosted by the Marshall County Tourist Commission and the Murray Convention & Visitors Bureau and was the sixth of 10 Walmart FLW Tour tournaments of the 2012 season. The Walmart FLW Tour on Lake Champlain presented by Chevy will be the next tournament and will be held June 28-July 1 in Plattsburgh, N.Y. The event will be hosted by the City of Plattsburgh, N.Y., and the Adirondack Coast Visitors Bureau, and boats will launch from Dock Street Landing in Plattsburgh. For a complete schedule, visit FLWOutdoors.com.

Coverage of the Kentucky Lake tournament will be broadcast in high-definition (HD) on NBC Sports Network when “FLW” airs Aug. 19 from 1-2 p.m. ET. “FLW” is hosted by Jason Harper and is broadcast to more than 559 million households worldwide, making it the most widely distributed weekly outdoors-sports television show in the world.