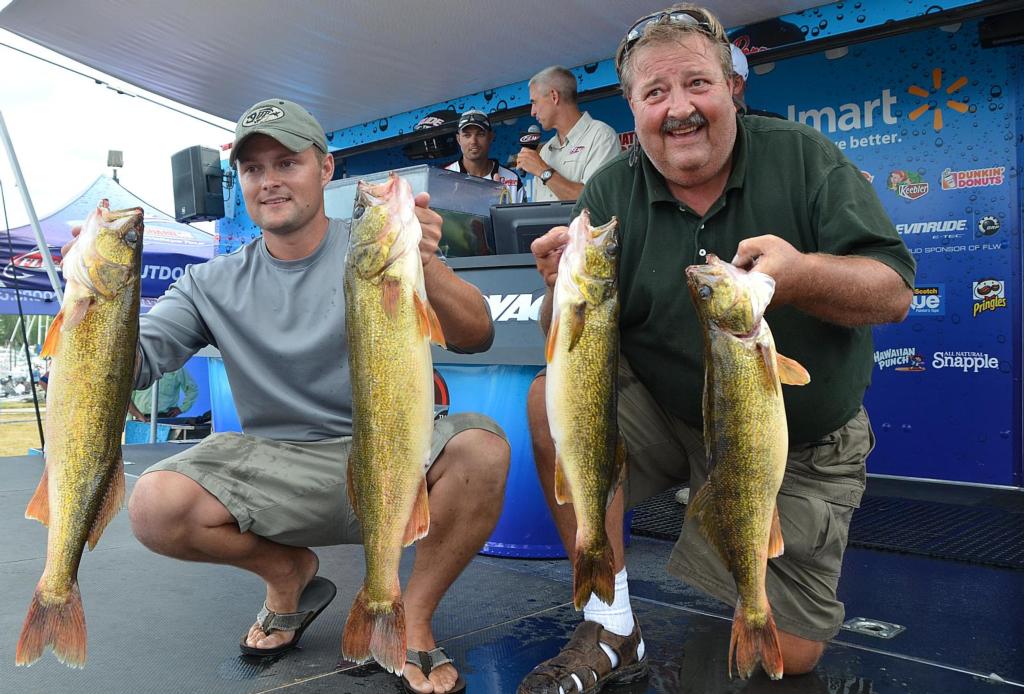 ESCANABA, Mich. – Ryan Dempsey of Oneida, Wis., and his co-angler Bruce Frevert of Centerville, Iowa, brought a five-walleye limit to the scales Thursday weighing 27 pounds, 15 ounces to lead day one of the National Guard FLW Walleye Tour at Bays de Noc. Dempsey and Frevert now hold a slim 4-ounce lead over Chad Schilling of Akasaka, S.D., and co-angler Phillip Riccio Jr., of Huntley, Ill., who caught five walleye weighing 27-11 in a tournament featuring the top walleye professionals from all across North America.

Fishing in his third tournament with FLW, Dempsey chose to sign up for the event on Wednesday evening after closely watching the weather forecast all week.

“I was really looking for a good forecast,” Dempsey said. “I really didn’t feel like coming up here and battling the five-foot waves if the wind was blowing hard. It looked good, and it ended up being a good decision for me.”

Dempsey said like most of the tournament field, his fish came on spinners. He also had some success pulling Reef Runners.

“We left our fish by 11 a.m. this morning,” Dempsey continued. “We didn’t want to beat them up and I wanted to save them until tomorrow. I just hope the big fish stay in my area. It’s Bays de Noc, though, and the wind can change 180 degrees and really change some things.

“We threw back a few 6-pounders today, so at the very least I think I’ll come in with those,” Dempsey added. “I’m pretty confident that my spot will hold up. There are other boats fishing around me, and I’m not really doing anything different. I just got the right bites today. Hopefully, you’re talking to me again tomorrow.”

The top 10 pros and co-anglers after day one at Bays de Noc are: