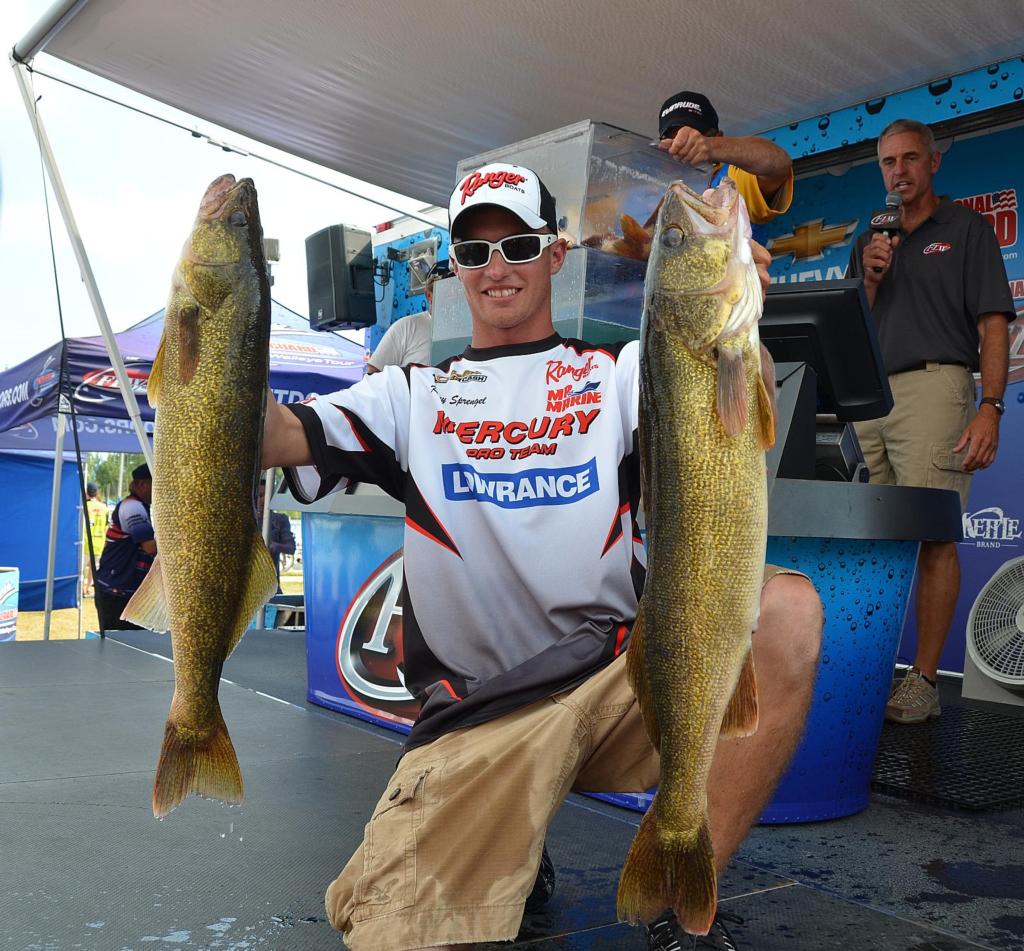 ESCANABA, Mich. – Korey Sprengel of Beaver Dam, Wis., caught the largest stringer of the tournament Friday, a huge 28 pound, 6 ounce five-walleye limit to take the lead at the National Guard FLW Walleye Tour at Bays de Noc. His two-day catch of 10 walleye weighing 53 pounds, 13 ounces gives him a modest 2 pound, 6 ounce lead heading into the third and final day of the tournament. The top 10 pro and co-anglers will compete for the title on day three.

All of the fish that Sprengel have caught have come from the same area. Sprenger describes the area as a one-mile circle, and says the key is just figuring out which part the fish have moved to each day.

“It was really a grind out there today,” said Sprengel. “Every time I thought that it was time to switch it up and try something different, I would get another bite that would keep me there. I was getting ready to switch to crankbaits, and then the 31-incher hit. Then I was getting ready to make a move around 2:30 and every planer board went back and we ended up getting a quadruple. As fast as we could pull them in, we boated all four. That gave us our limit for the day.”

Sprengel is confident that the area will hold up for one more day, although the wind may play a factor. Sprengel said he caught his fish pulling spinners with crawler harnesses, like the majority of the field.

“It’s one of those spots that really holds up, no matter the weather,” Sprenger continued. “The only thing is that they’re calling for some big winds out of the south tomorrow, so those waves are going to be big. The hardest part is getting to them. I’m varying my speed based on how deep the fish are. If they’re up shallower, I’ll speed up and raise my baits. If they’re deeper, I’ll slow down. Today we had to wait until the sun came out. Once the water warmed up a little bit they just turned on.

“The fish set up on the structure based on the current, and this afternoon everything came together for me,” Sprengel said. “The gameplan for tomorrow is just to hit that spot again and hope it holds up. There are a few boats in the top-10 fishing the same area, so I’m pretty confident that it will.”

The top 10 pros after day two and moving on to fish the final day at Bays de Noc are:

The top 10 co-anglers moving on to fish the final day are:

In FLW Walleye Tour competition, pro and co-anglers are competing for valuable points in the hope of qualifying for a shot at the 2012 National Guard FLW Walleye Tour Championship which will be held on the Mississippi River in the Quad Cities Oct. 25-28.

Anglers also competed for the coveted 2012 National Guard FLW Walleye Tour Angler of the Year title in 2012 that was determined by the most points accumulated over the five-tournament season.

Walleye pro Chad Schilling of Akasaka, S.D., wrapped up his season-long journey for the National Guard FLW Walleye Tour Angler of the Year title Friday. For his efforts, Schilling received $10,000 for the title.

“Winning Angler of the Year means absolutely everything to me,” said Schilling. “This is for everybody that watches me back home. I come from a real small town, and they really don’t have anybody else to root for in this game. So it’s an honor to win this award for them. Now I have to concentrate on winning this tournament.”

The top 10 pros and co-anglers will take off from Escanaba Harbor located at Loren W. Jenkins Drive in Escanaba at 6:30 a.m. Saturday’s final weigh-in will be held at the Walmart located at 601 North Lincoln Road in Escanaba beginning at 4 p.m.