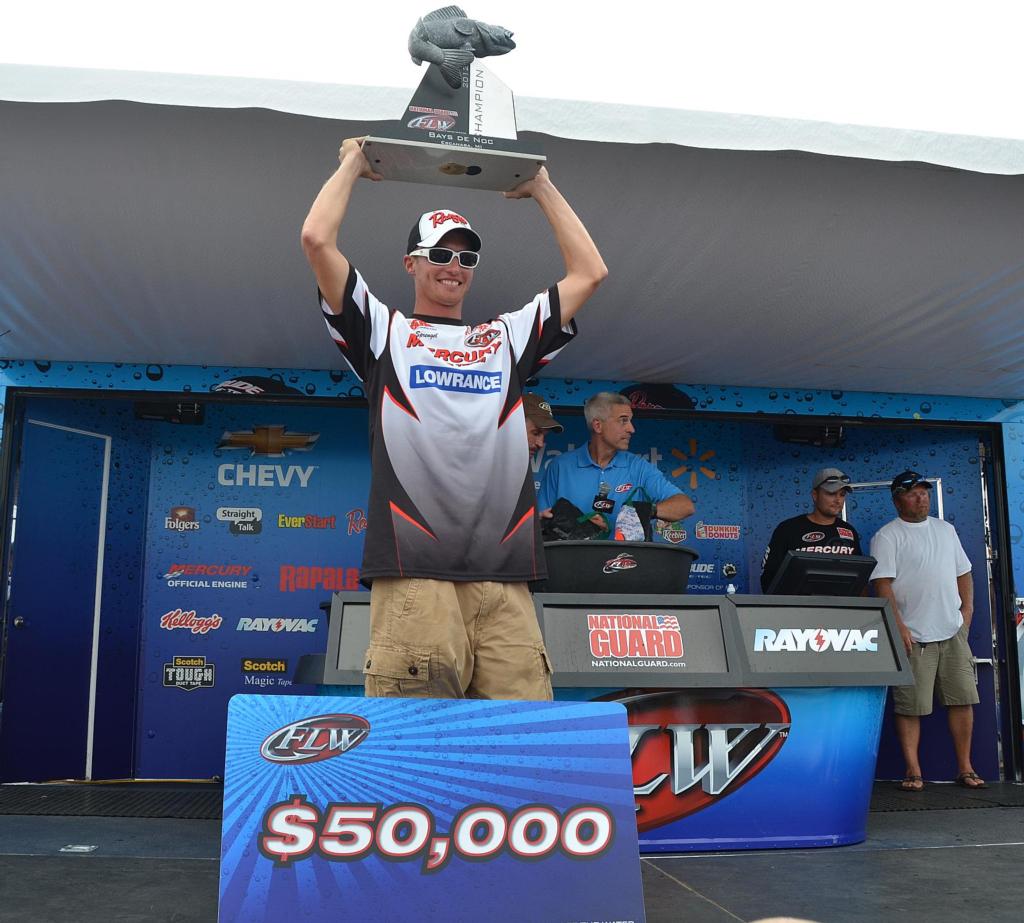 The catch gave him the win over pro Ryan Dempsey of Oneida, Wis., who caught a total of 15 walleye weighing 77-1 and earned $15,400. Although the top two competitors actually had the same weight, FLW rules state the tiebreaker goes to the angler who had finished higher in the standings on the previous tournament day. Because Sprengel held the lead over Dempsey on day two, he was awarded the victory and crowned champion.

“This feels so great,” said Sprengel, who claimed his first Walleye Tour title in only his third event. “I could not possibly feel any better than I do right now.”

The 24 year-old pro made a key decision Saturday afternoon to switch to crankbaits after having fished the previous two days using only spinners with crawler harnesses.

“It got real tough this afternoon, and I’m not really sure why,” Sprengel said. “I only had about two hours of fishing time left and I needed one more fish, and it had to be a good one. I couldn’t get a bite, I think I had just pounded my area too long. I knew that they had been biting on crankbaits earlier this week, so I made the decision to switch and cover more water and hopefully find an active fish. I made the switch to a Rapala Down Deep Husky Jerk, and it wasn’t five minutes later and I got hit. It ended up being a 26-incher and definitely was the difference for me today.”

Sprengel fished one main area throughout the entire event. Although the crankbait turned out to be the difference maker for him, the majority of his walleyes came on the crawler harnesses and spinners.

“I was using size 41/2 willow blades and size 6 Colorado blades all week. Chartreuse and gold were the hot colors for me,” said Sprengel. “The area I was fishing is an underwater shoal over in Big Bay de Noc. It’s about a 20-mile run from the launch site. Dusty (Minke) and Bill (Shimota) were fishing the same area all week as well. It was about a mile across, and the key was just locating the fish based on the wind and current. The deepest point was about 22 feet, but I was fishing as shallow as 14 feet.”

The weights brought in by tournament anglers throughout this event were much higher than originally predicted by most. Sprengel however, said he suspected that his area was holding the fish needed to win this event.

“I knew that Lake Michigan was capable of producing these weights, and my final weight was pretty close to what I had expected coming in,” Sprengel said. “I just didn’t think everyone else would have the weight as well. Most of the guys fishing were on the west shore, and they really had perfect conditions this week. Any wrong wind on the west shore in the Cedar River area and that bite is just done. So it was surprising to see so many big weights.”

Sprengel had hoped to fish the entire FLW Walleye Tour this season, but couldn’t afford it financially. After his win Saturday, Sprengel now has the confidence and the bankroll to compete against the best walleye anglers in the world next season.

All you can do is your best, every day,” said Sprengel. “This win definitely gives me the confidence and reassures me that I’m doing well. I’ll be fishing the Tour full-time next year, and I can’t wait for that. I’m ready to start right now.”

Final results for the top 10 pros at Bays de Noc are:

William Bay of Berlin, Wis., earned the victory in the Co-angler division to take home $6,000. He posted a three-day weight of 15 walleyes totaling 78 pounds, 7 ounces

Final results for the top 10 co-anglers at Bays de Noc are:

In FLW Walleye Tour competition, pro and co-anglers are competing for valuable points in the hope of qualifying for a shot at the 2012 National Guard FLW Walleye Tour Championship which will be held on the Mississippi River in the Quad Cities Oct. 25-28.

Anglers also competed for the coveted 2012 National Guard FLW Walleye Tour Angler of the Year title in 2012 that was determined by the most points accumulated over the five-tournament season.