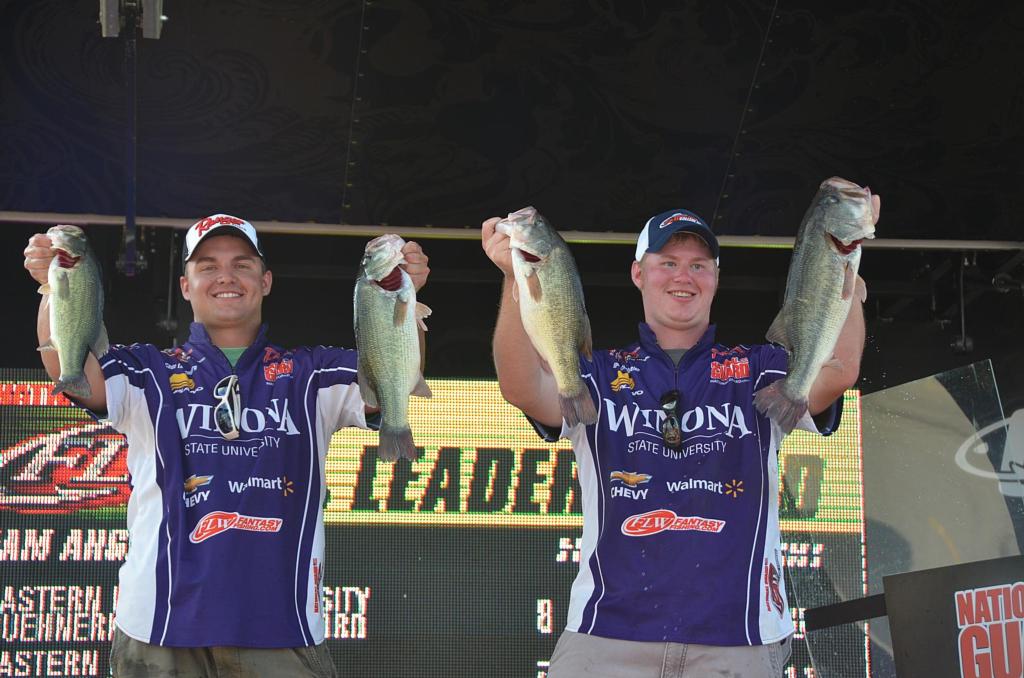 CARLYLE, Ill.- The Winona State team of Cade Laufenberg, Stoddard, Wis., and Sam Schollmeier, Rochester, Minn., jumped into the lead in a big way at the National Guard FLW College Fishing Central Conference Championship on Carlyle Lake Friday with the biggest sack of the tournament, a five-bass limit weighing 17 pounds, 13 ounces. Their sack was anchored by a 6-3 bass making their two day total weight 27 pounds, 8 ounces. They lead Purdue University, their closest competitor, by a mere 15 ounces going into the final day of competition. Teams are competing for a Ranger Z117 bass boat with a 90-horsepower Evinrude or Mercury outboard and a berth in the National Guard FLW College Fishing National Championship.

“We are pumped,” said Laufenberg, a sophomore in environmental science. “We hit the grass today with our `swagger’ (referring to their secret bait) and started catching fish. We pretty much stayed in one area all day, it’s a 150 yard stretch of flooded cover and the fish just seem to keep moving into the area. We were sharing the same water with the team from Purdue. It’s a pretty incredible spot.

“We are exactly where we want to be,” Laufenberg continued. “We came here to make the top-five, which we did, and now tomorrow we can fish the most relaxed and calm we have ever fished. We’re still here to win, but a lot of the pressure is off so it should be a lot more fun.”

Although fishing Carlyle Lake for the first time the team from Winona State seems to have figured something out. According to Laufenberg they are keying in on bait fish which the bass are following. Laufenberg believes that the area they are fishing will keep replenishing and he is confident they will catch another limit tomorrow from the same area on Saturday.

“We had our limit before 10,” said Schollmeier, a sophomore majoring in law enforcement. “We caught that kicker fish first thing, it was exciting. We did move late in the afternoon and caught one more nice bass that we were able to cull with. But we were targeting the same stuff, shallow grass.”

Believing their choice of bait is what is separating them from the rest of the teams; they remained closed lipped about what they are using. However, Laufenberg did indicate that he believes it is a bait the bass have not seen before and so are attacking it as soon as it hits the water.

The top five teams competing tomorrow and also qualifying for the National Championship are:

Fans will be treated to the FLW Expo at Walmart Saturday from noon-4 p.m. prior to weigh-in. The Expo includes Ranger boat simulators, interactive games, activities and giveaways provided by sponsors. Fans can also learn more about the sport of fishing and other outdoor activities. All activities are free and open to the public.