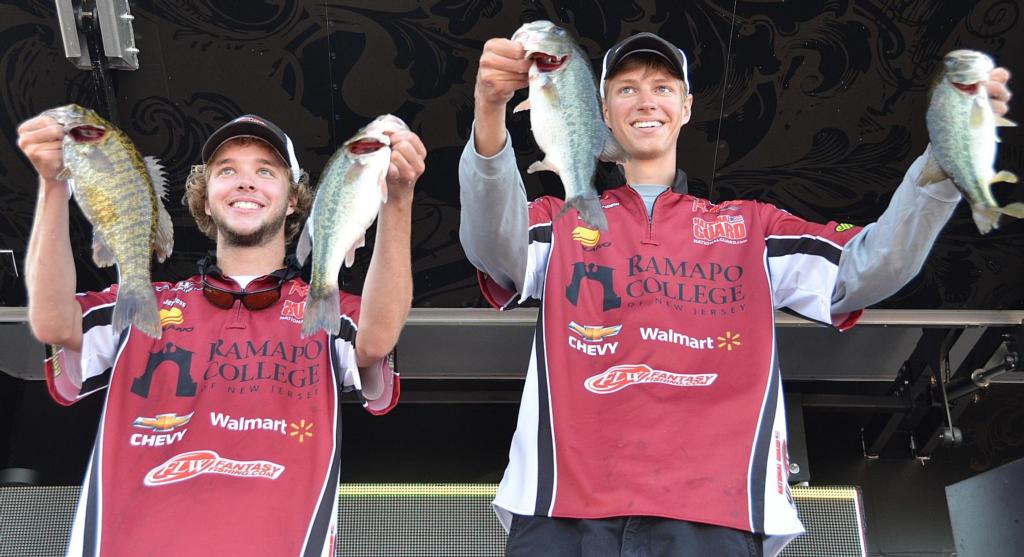 “We are using a drop-shot in water that is anywhere from 20 to 60 feet deep targeting brush piles,” said Zapf, a senior in accounting. “The key has been fishing slow.

“It’s a great feeling to be in this position, to have a chance to become repeat champions,” Zapf went on to say. “There was a lot of pressure to come down here and do well and now that we are in the top-five we’re in it to win. We’re fishing with a lot of confidence, we put in a lot of practice and we are going to follow the same game plan tomorrow to hopefully bring home a win.”

The team from New Jersey said they came down to Philpott Lake and fished for eight days prior to the lake going off- limits. Attributing their practice time to their success the team feels they have learned the lake well enough and have enough fresh water to fish tomorrow to become back to back Northern Conference Champions.

“We caught what we weighed in 30 minutes,” said Voss, a junior majoring in information systems. “We are seeing most of our fish on graphs and basically dropping the bait right on top of their head. All our bass came off of one main spot, but within that spot there is one tiny `sweet’ spot that all our fish came out of today. We only fished two areas today trying to save a few spots that we haven’t fished yet for tomorrow.”

The top five teams competing tomorrow and also qualifying for the National Championship are:

Anglers will take off from Twin Ridge Recreation Area located at State Road 624, Twin Ridge Marina Road in Henry, Va., at 7 a.m. Saturday morning. Final weigh-in will be at Walmart located at 976 Commonwealth Boulevard, in Martinsville, Va., beginning at 4 p.m. Takeoff and weigh-in are free and open to the public.

Fans will be treated to the FLW Expo at Walmart on Saturday from noon-4 p.m. prior to weigh-in. The Expo includes interactive games, activities and giveaways provided by sponsors. Fans can also learn more about the sport of fishing and other outdoor activities. All activities are free and open to the public.