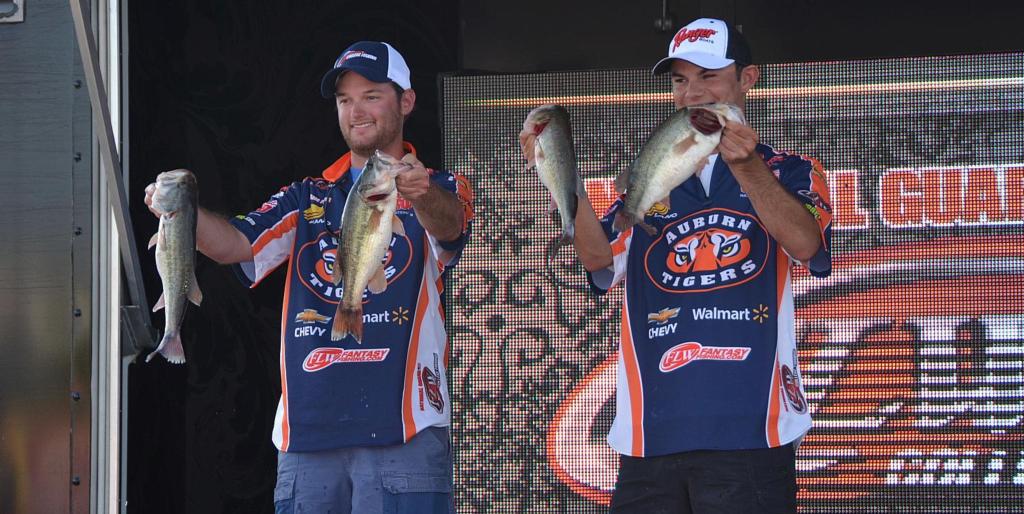 ROCK HILL, S.C. – The Auburn University team of Jordan Lee and Shane Powell, both of Auburn, Ala., increased their lead on day two of the National Guard FLW College Fishing Southeastern Conference Championship presented by Evinrude on Lake Wylie Friday with a five-bass limit weighing 12 pounds, 4 ounces. Their two day total weight of 24 pounds, 6 ounces leads the University of Alabama, their closest competitor, by a commanding 4 pounds, 9 ounces going into the final day of competition. Twenty college teams from around the region are participating in the tournament and competing for a Ranger Z117 bass boat with a 90-horsepower Evinrude or Mercury outboard and a berth in the National Guard FLW College Fishing National Championship.

“We had such a fun day and were so blessed,” said Lee a senior in business marketing. “We caught about 30 or 40 fish again today, 20 of them were keepers. We pretty much caught them the same way today, deep with crankbaits. We tried shallow fishing again but, nothing. Everything we caught shallow was short.

“We still haven’t caught a 3-pounder yet,” Lee continued. “But we have a pretty comfortable lead and we are confident we can catch them again tomorrow. The way we have been catching them we just need five minutes on the right spot and I’m pretty sure we’ll have a limit.”

“One spot was so prolific we were catching them two at a time,” said Powell, a senior in fisheries. “You could just see the bass stacked-up on the graph. We caught so many fish today; it was so much fun!

“The first three spots we went to this morning already had boats sitting on them so we kept moving,” Powell went on to say. It wasn’t until we hit our third or fourth stop that we even had a bite. Once we found the right spot and we hit it at the right time the fish were biting like crazy. One spot we hit three times before we could actually get the fish to bite, but we knew they were there because we could see them on the graph so we kept going back.”

While Auburn University has a commanding 4 pound, 9 ounce lead over second place, only 10 ounces separates second, third and fourth places.

Rounding out the top-five teams and also qualifying for the FLW College Fishing National Championship are:

Fans will be treated to the FLW Expo at Walmart on Saturday from noon-4 p.m. prior to the final weigh-in. The Expo includes interactive games, activities and giveaways provided by sponsors. Fans can also learn more about the sport of fishing and other outdoor activities. All activities are free and open to the public.

Coverage of the Southeastern Conference Championship will be broadcast in high-definition (HD) on NBC Sports Network when “FLW” airs Dec. 23 from 1-2 p.m. EST. “FLW” is hosted by Jason Harper and is broadcast to more than 559 million households worldwide, making it the most widely distributed weekly outdoors-sports television show in the world.