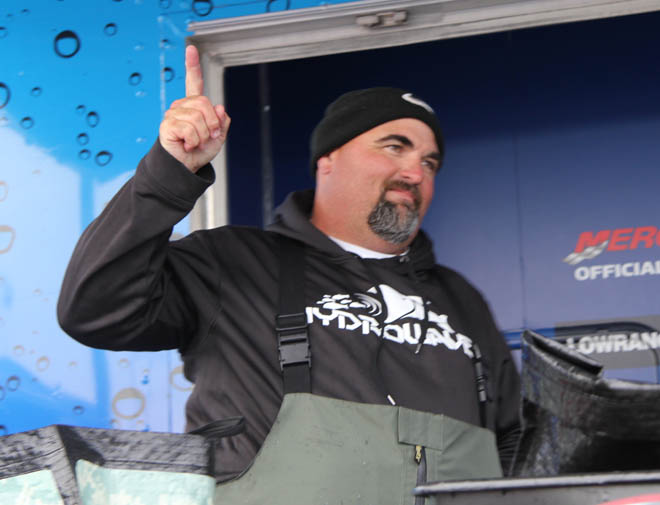 LONGVIEW, Texas – Ritter Ferguson of Diana, Texas, weighed a five bass limit on Saturday weighing 13 pounds, 4 ounces to win the EverStart Series Texas Division on Lake of the Pines presented by Evinrude. His three-day total of 15 bass weighed 46 pounds, 9 ounces and earned him $24,715 for his victory.

With water levels below normal and anglers all vying for the same spot, Ferguson said that he was surprised that he fished alone all week. Targeting bait fish on points and flats he said that he was able to find five or six schools of fish that he went back and forth from throughout the week.

“The good Lord was shining down on me this week and made everything happen,” Ferguson said. “Lake of the Pines is known for schooling fish and I was lucky enough to find five or six good schools of fish during practice that held out for me all week.

“Today I caught all my fish on a Zoom Brush Hog,” Ferguson continued. “I was also Texas rigging a Zoom Trick Worm earlier in the week. Most of the fish came in 6 to 15 feet of water. My main spot was a point that the bass were coming up to feed on. Other areas that I toggled back and forth between to get my limit were flats that were also holding bait fish the bass were feeding on.”

Alton Wilhoit and Randy Cisler tied for biggest bass of the tournament in the Pro Division. On Thursday each caught a 7-pound, 3-ounce bass that earned them the day’s EverStart Series Big Bass award worth $90 each.

Keith Honeycutt of Temple, Texas, won the Co-angler Division with a three-day total of 11 bass weighing 29 pound, 4 ounces. For his efforts Honeycutt won a Ranger Z117 with an Evinrude or Mercury outboard motor plus $5,000 Ranger Cup bonus.

Denton caught the biggest bass of the tournament in the Co-angler Division Friday – a 8-pound, 11-ounce bass – that earned him the day’s EverStart Series Big Bass award of $120.

For complete details and updated information visit FLWOutdoors.com. For regular updates, photos, tournament news and more, follow FLW on Facebook at Facebook.com/FLWFishing and on Twitter at Twitter.com/FLWFishing.