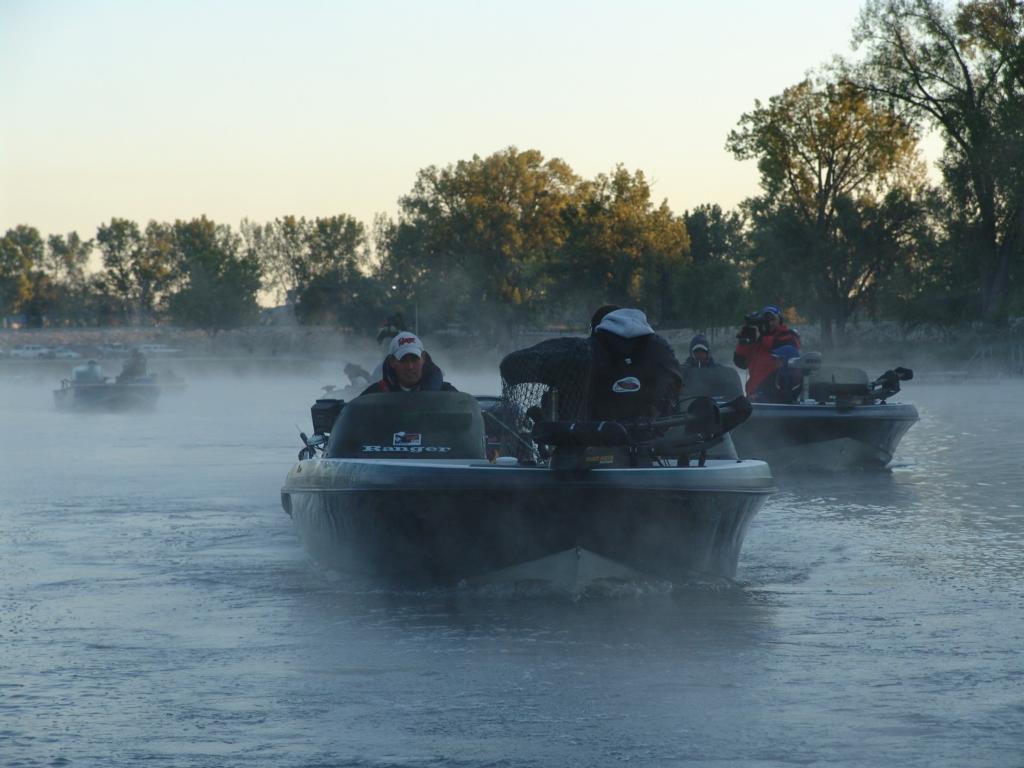 With steam rising from marina waters, anglers head for the check-out boat in the last day of the Wal-Mart FLW Walleye League Finals. Photo by David A. Brown.
October 15, 2012 • MLF • Press Releases

DAVENPORT, Iowa – The National Guard FLW Walleye Championship will visit the Mississippi River and the Quad Cities area Oct. 25-28 to crown walleye fishing’s top angler of 2012. Hosted by the Quad Cities Convention & Visitors Bureau, the tournament will feature 42 of the world’s top walleye pros and co-anglers fishing for the sport’s biggest award – $100,000 cash in the Pro division and $15,000 cash in the Co-Angler division.

“This is the most excited I have been for a tournament in quite a while,” said Dr. Pepper TEN pro John Balla of Bartlett, Ill. “I consider this event as being on my home waters. I’ve fished these river pools extensively over the last 10 years, and it’s a fantastic place for a tournament. So many different decisions are going to have to be made.

“The first challenge that guys are going to have to address is the slot limit,” said Balla, who has seven Top-10 finishes in FLW competition. “We’re allowed one walleye over 27 inches per angler, and four from 15 to 20 inches. That can make it tough to scratch out a limit. Some guys are going to be targeting the saugers and saugeyes, as there is no slot limit for them. That means if a guy changes his strategy and gets on a nice school, he could win with those.

“The low water levels also present a big challenge for us,” Balla continued. “The river is a foot and a half low right now, and that makes it tough to find a good current. That definitely slows the bite down.

“However, the biggest decision that anglers are going to have to make is using the river lock system,” Balla said. “We’re launching out of Pool 16. There are plenty of fish there, but Pool 14 has the biggest population of fish and the most over 27 inches. With the lock system, though, it’s a long run and it’ll take quite a bit of time to get there. We’re going to have make the decision of do I grind it out in the closer pools and get more fishing time? Or do I make the long run and lose a few hours of precious time and gamble that we can catch a quick limit in Pool 14? Decisions are going to be the key to winning this tournament.”

Balla said that anglers are going to be able to fish to their strengths because of the low water levels, and every river presentation would be in play.

“Some guys will be trolling, others will be hand lining,” he said. “On the river, the leaves and debris can really play a factor as well. When the duck grass starts to get pulled off its roots and the leaves start to just pile up, the river gets dirty and it can take the trolling bite out of the equation. If there is a ton of debris in the river, everyone will be jigging and rigging.

“The first two days are really key in this tournament,” Balla went on to say. “The weights are going to be very close, and you’re not going to be able to make a giant jump to the top of the leaderboard. You’re going to have to be consistent, and it’s really important to make that top 10 after the first two days.”

Balla predicted that it would take 81/2 to 9 pounds a day to make the final day 3 cut, and that the winner would have 34 to 36 pounds.

“It was a personal goal of mine to qualify for this tournament this year,” Balla said. “There are a ton of decisions that anglers will have to make, and it’ll make for an extremely interesting and competitive tournament.”