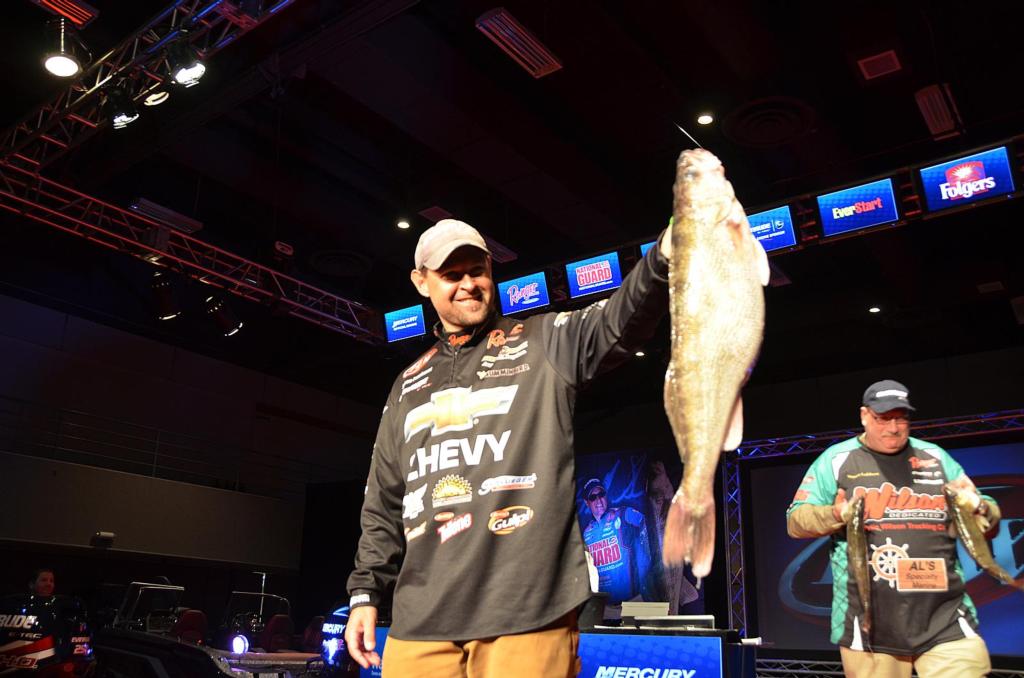 DAVENPORT, Iowa – Forty-two of the top walleye pros in the world continued their four-day competition for a top cash award of $100,000, the richest prize in walleye fishing, at the National Guard FLW Walleye Championship on the Mississippi River on Friday.

Tournament anglers were bundled up on the second day of competition, as air temperatures dropped more than 30 degrees in the 24 hours since the start of the event on Thursday. Chevy pro Jason Przekurat of Stevens Point, Wis., vaulted to the top of the leaderboard after Day 2 by weighing in three walleye for 15 pounds, 4 ounces, including a massive 9-pound, 5-ounce kicker fish. Przekurat’s two-day catch of five walleye weighing 20 pounds, 11 ounces gives him a 6-pound, 1-ounce lead heading into the third day of the tournament.

“All of these guys have been trying to catch the overs all week,” said Przekurat, who has more than $330,000 in career winnings with FLW. “I have to thank the Good Lord for allowing me to catch one today.

“We actually missed him with the net on the first shot,” Przekurat continued. “My partner and I almost came unglued. We regained our composure and on the second shot we got him in the boat. It happened so fast that it was almost unbelievable.”

Przekurat spent the day in pool 14, like the majority of the field, and said he is fishing four main areas. He said he was throwing a jig, targeting wing dams, and credited his areas and presentation as being the key to his day two success.

“Once I put the pattern together of finding fish on the wing dams, it’s been fairly easy to duplicate all over the system,” Przekurat said. “There are some guys around me, but they’re not doing what I’m doing. I’ve got lures figured out. I’ve got depths figured out. It’s just a matter of running into the right pods of fish at the right time. At any given time those fish move up, and if you’re there, it’s easy.

“When you come to a river, you really have to pay attention to detail,” Przekurat went on to say. “You have to notice how you’re presenting the lures to them. If you’re off by just 10 feet, you’re not going to get a bite. You have to know where your jig is at all times.

“My confidence is good heading into tomorrow,” the Chevy pro said. “Today was really the day that I worried about. Now I’m through the cut, and I can’t be nervous at this point. I’ve got a decent lead. Tomorrow, I’m just going fishing.”

Day one leader pro Danny Plautz of Madison, Wis., slipped to the No. 2 position with a two-day catch of eight walleye weighing 14-10.

The top 20 pros that will continue to Saturday’s competition are:

Stuart Lubbert of Stewart, Minn., leads the co-angler division with a two-day total of four walleye weighing 17 pounds, 1 ounce, followed by Tom Wiehoff of Pierre, S.D., in second place with six walleye weighing 12-13. Co-anglers are fishing for a top award of $15,000 that will be awarded Saturday.

Fans will also be treated to the FLW Expo at the River Center on Saturday and Sunday from noon-4 p.m. prior to the weigh-ins. The Expo includes Ranger boat simulators, the opportunity to interact with professional anglers, enjoy interactive games, activities and giveaways provided by sponsors, and fans can learn more about the sport of fishing and other outdoor activities. All activities are free and open to the public. On Sunday the first 300 children 14 and under who are accompanied by an adult will receive a free rod and reel combo courtesy of the Quad Cities Convention & Visitors Bureau/Quad Cities Sports Commission. Also on Sunday one lucky fishing fan will win a $500 Walmart gift card. The gift card giveaway is free to enter but the winner must be present at the conclusion of Sunday’s final weigh-in to win.