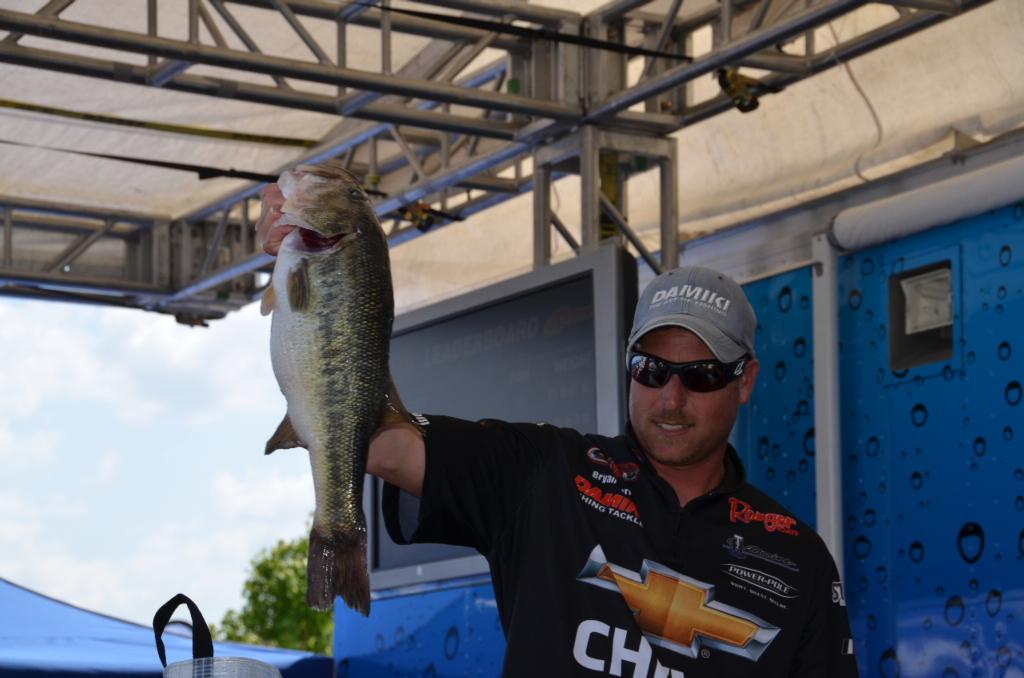 Chevy pro Bryan Thrift holds up his kicker from his 16-pound, 15-ounce limit that gave him the lead after a tougher day two on Lake Eufaula. He carries a two-day total of 37-5 heading to the third day of competition. Photo by Kyle Wood. Angler: Bryan Thrift.
May 17, 2013 • MLF • Press Releases

EUFAULA, Ala. – Chevy pro Bryan Thrift of Shelby, N.C., brought a five-bass limit to the scales weighing 16 pounds, 15 ounces to take the lead on day two of the Walmart FLW Tour at Lake Eufaula presented by Straight Talk Wireless. Thrift’s two-day total of 10 bass weighing 37-5 gives him a 2-pound, 7-ounce lead over second-place pro Randy Haynes of Counce, Tenn., heading into day three of the four-day competition featuring the world’s best bass-fishing anglers casting for the top cash award of up to $125,000.

“I’m fishing at least 50 different spots throughout the day,” said Thrift, who has two previous top-10 finishes at Lake Eufaula in FLW competition. “I’m pulling in and making four or five casts, and then I’m moving somewhere else. All of the big fish that I have caught over the last two days have been biting on the first or second cast.

“Every stop I make, there is something down there – hard spots, standing timber, brush piles – something that is up off of the bottom a couple of feet,” Thrift continued. “If you make the right cast and they are there, they’re going to bite it.”

Thrift said that he found and marked all of these areas during his practice period.

“I spent 12 hours a day idling around for three days,” the Chevy pro said. “It was boring, it was hot and it was not very fun.”

Thrift said that his areas were mainly offshore, and varied in depths from 6 to 15 feet. He said that he only caught seven keeper fish throughout the entire day, and three of them were well under 2 pounds. Thrift also said that he was using only one bait, but was not yet ready to divulge any specifics.

“There’s really no rhyme or reason to it,” Thrift said about his areas. “I can’t tell which spots I’m going to get a bite out of. I caught a 51/2-pounder today where I never had a bite yesterday. The spot where I caught two 5-pounders yesterday, I never had a bite today. It’s just totally random, and you just have to keep running and have the confidence that sooner or later you are going to pull up on the right place and make that right cast and catch a good one.”

The top 20 pros that will fish Saturday on Lake Eufaula are:

Jason Reyes of Huffman, Texas, won Friday’s 3M ScotchBlue Big Bass Award on the pro side with a fish weighing 6 pounds, 9 ounces to win the $500 prize.

Fans will also be treated to the FLW Outdoors Expo at Walmart on Saturday and Sunday from noon to 4 p.m. prior to the final weigh-ins. The Expo includes Ranger boat simulators, the opportunity to interact with professional anglers, enjoy interactive games, activities and giveaways provided by sponsors, and fans can learn more about the sport of fishing and other outdoor activities. All activities are free and open to the public.

Coverage of the Lake Eufaula tournament will be broadcast in high-definition (HD) on NBC Sports Network when “FLW” airs June 23 from 11 a.m.-12 p.m. ET. The Emmy-nominated “FLW” television show is hosted by Jason Harper and is broadcast to more than 564 million households worldwide, making it the most widely distributed weekly outdoors-sports television show in the world.