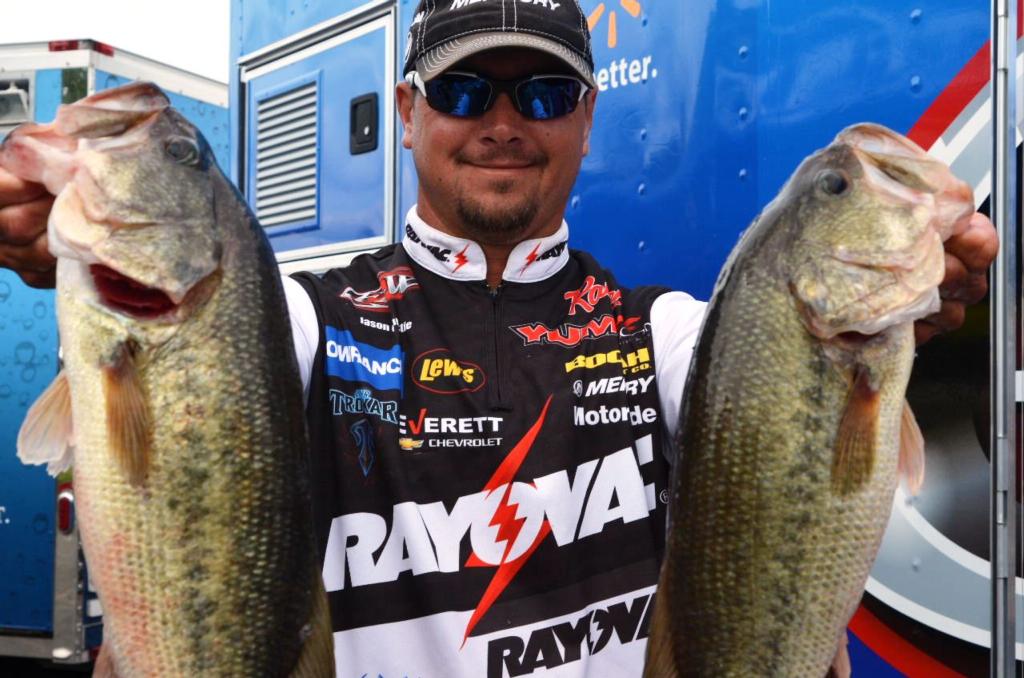 GROVE, Okla. – Rayovac pro Jason Christie of Park Hill, Okla., proved that in fishing there is sometimes a hometown advantage, as he brought a five-bass limit to the scales Thursday weighing 21 pounds, 12 ounces to take the lead at the Walmart FLW Tour at Grand Lake presented by Castrol. Christie now holds a slim 5-ounce lead over another Oklahoma fishing legend, Chevy pro Jimmy Houston of Cookson, Okla., who weighed in five bass worth 21 pounds, 7 ounces. Both will be looking to add to their totals tomorrow heading into day two of the four-day competition featuring the world’s best bass-fishing anglers who are vying for the top cash award of up to $125,000.

“I actually exceeded my expectations a little bit today,” said Christie, who has five career victories in FLW competition on Grand Lake. “I was hoping to catch 16 to 18 pounds and stay in the hunt, but I got lucky today and pulled up on the right spot at the right time, and they were there.”

Christie caught an early-morning limit by fishing shallow water, but knew that he needed to change his tactics in order to stay near the top of the leaderboard.

“At 12 o’clock I decided that what I was doing wasn’t working,” Christie said. “I knew that I needed to do something different, and it paid off for me.”

Christie made the move to his key area, where he was able to quickly upgrade his limit by culling all of his smaller fish. He said the area was not new to him, and was a place where he has caught fish in the past.

“With the way that they ran the water today, I think it pulled a lot of those fish out and set them where they needed to be,” Christie continued. “One thing about Grand Lake, though, is that they can be there today and gone tomorrow. You just have to try to catch them coming out, and today I had pretty good timing. Hopefully I can hit it at the right time again tomorrow.

The top 10 pros after day one on Grand Lake are:

Blaukat won the 3M ScotchBlue Big Bass Award on the pro side Thursday with a fish weighing 5 pounds, 14 ounces worth $500.

Fans will also be treated to the FLW Outdoors Expo at the Walmart on Saturday and Sunday from noon to 4 p.m. prior to the final weigh-ins. The Expo includes Ranger boat simulators, the opportunity to interact with professional anglers, enjoy interactive games, activities and giveaways provided by sponsors, and fans can learn more about the sport of fishing and other outdoor activities. All activities are free and open to the public. Also on Sunday, country music artist Dylan Scott will perform a free live concert on the Walmart weigh-in stage at 3 p.m.