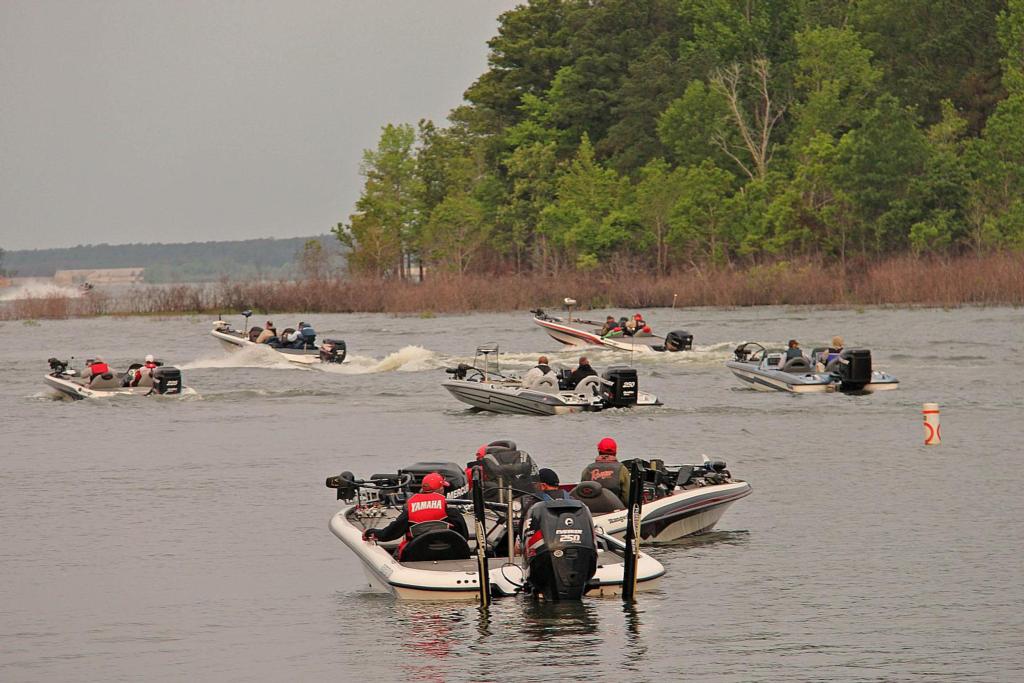 JASPER, Texas – FLW College Fishing is headed to Sam Rayburn Reservoir Oct. 5-6 for the Southern Conference Invitational tournament. Forty-five college teams have qualified for this tournament and will be competing for a top award of $4,000 and a berth in the 2014 FLW College Fishing National Championship.

“Sam Rayburn is one of those lakes where you basically can fish to your strengths,” said Keystone Light pro Chad Grigsby, who earned a fifth-place finish when the FLW Tour visited Sam Rayburn in October of 2012. “When we were here last fall, the top 10 was a mixed bag of some guys fishing deep and some fishing shallow. I fished shallow, but Phil Marks went on to win it by fishing deep.

“I only spent an hour of my time fishing deep,” Grigsby said. “I found a couple of spots where I could catch a fish on every cast for an hour. However, they were only 13- or 14-inch spotted bass, and not the fish that I needed to compete for the win. I was just never able to get on those big fish schools. The fish are still deep, though, and there will still be a lot of summertime patterns in play.”

Grigsby said that teams choosing to fish shallow would be targeting the matted hydrilla and grass lines with flipping and punching baits. A good reaction bait pattern is expected to produce as well. Teams choosing to fish the deep water will be concentrating on the river channels and drops throwing deep-diving crankbaits and Texas-rigged soft plastics.

“There is a lot of standing timber in that lake, and on certain parts of the lake you can’t do a whole lot of running around,” Grigsby continued. “If a team was coming here for the first time, the advice that I would give them would be to keep an open mind. I’d fish shallow in the mornings, then go out and graph around out deep and look for the big-fish schools. If you execute right you can find the right quality of fish to win this event deep or shallow.”

Grigsby hesitated to give a winning weight prediction, but said that 17 pounds a day is usually a pretty good stringer at Sam Rayburn.

“I really don’t know how it’s been lately,” he went on to say. “Seventeen pounds is a pretty good weight there. I averaged around 13 to 14 pounds a day last year and finished fifth. But, you may see a team get into those big-fish schools. A 25- to 30-pound limit is not out of the question.”

Anglers will take off from the Umphrey Family Pavilion located at 5438 Recreation Road 255 W. in Jasper at 7 a.m. each day. Saturday’s weigh-in will be held at the marina beginning at 2:30 p.m. while Sunday’s final weigh-in will take place at the Walmart located at 800 W. Gibson St. at 3 p.m. Takeoffs and weigh-ins are free and open to the public.

Schools competing in the Sam Rayburn Reservoir tournament, which is hosted by the Jasper/Lake Sam Rayburn Area Chamber of Commerce, include:

University of Arkansas – Kenneth Anderson and Drew Porto, both of Fayetteville, Ark.

University of Arkansas-Little Rock – Zachary Rollings and Tyler Hamby, both of Bryant, Ark.

University of Arkansas-Monticello – Richard Harris and Ryan Crowley, both of Monticello, Ark.

University of Louisiana-Monroe – Nick Ladart and Brian Eaton, both of Monroe, La.

FLW College Fishing teams compete in three qualifying events in one of five conferences – Central, Northern, Southern, Southeastern and Western. The top fifteen teams from each regular-season tournament will qualify for one of five conference invitational tournaments. The top 10 teams from each conference invitational tournament will advance to the 2014 FLW College Fishing National Championship.