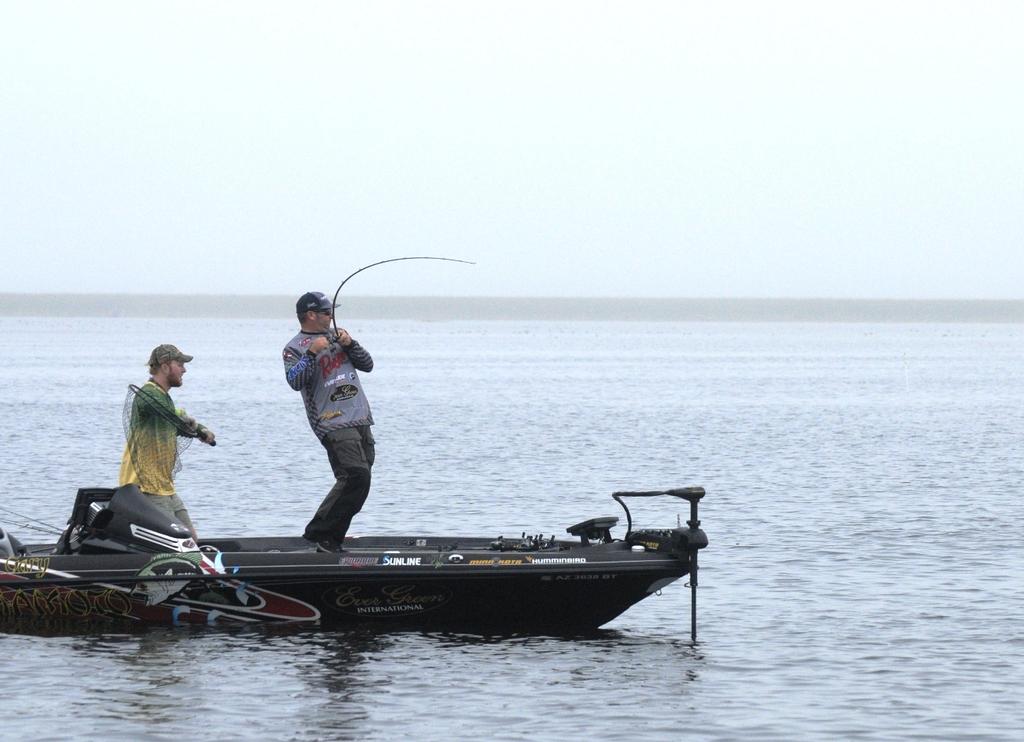 CLEWISTON, Fla. – For the third consecutive day, pro angler Brett Hite of Phoenix, Ariz., held the lead at the Walmart FLW Tour on Lake Okeechobee presented by Mercury Saturday. Hite’s five-bass limit weighing 15 pounds, 12 ounces gives him a three-day total of 74-3 and a 12-pound, 3-ounce lead heading into the fourth and final day of competition in the event that features 178 of the world’s best bass-fishing anglers casting for the top prize of up to $125,000.

2013 Forrest Wood Cup Champion Randall Tharp of Port St. Joe, Fla., is in second place and hoping to make a late final-day push to catch the Arizona pro. Tharp brought five bass to the scale weighing 16-2 to bring his three-day total to 62 pounds even.

“I really don’t know what changed today,” said Hite, who is in his eighth season as an FLW Tour professional. “The conditions were similar to the first day, and I thought that that they were going to bite a little better. It was slower, though, and I actually switched to my secondary pattern for the first time today. I was keeping that in my back pocket specifically for that reason, so I decided to make the switch around 11 (a.m.)”

Hite said that he has been fishing in the area known as the Monkey Box, and that most of the top-10 anglers are fishing near him.

“I’m still doing something different, though,” Hite said. “And I’m going to be doing the same thing tomorrow. I’ll probably fish my secondary pattern later in the day.”

Hite estimated that he caught around 12 keepers today. He said that he was going to focus on his job and not worry about the other competitors.

“Randall (Tharp) is a good buddy of mine, but he’s going to go do his deal tomorrow and I’m just going to focus on my job – to catch five big bass,” Hite said. “This is not saying that I’m not a little bit worried about him, but I’m going to go do my own deal.

“It really takes a lot to win one of these tournaments,” Hite went on to say. “The work that every one of these guys fishing in this event put in makes it really tough. I’ve been close quite a few times since my last win in 2008, and after a four- or five-year dry spell it would make winning this one that much better.”

The top 10 pros advancing to the final day of competition on Lake Okeechobee are:

Pros are competing for a top award of up to $125,000 this week plus valuable points in the hope of qualifying for the 2014 Forrest Wood Cup presented by Walmart, the world championship of bass fishing. The top 35 anglers in the point standings from the six events on the 2014 Walmart FLW Tour will qualify. The 2014 Forrest Wood Cup will be in Columbia, S.C., Aug. 14-17 on Lake Murray and is hosted by Capital City/Lake Murray Country Regional Tourism Board.

The top 10 pros will take off from the Clewiston Boat Basin located at 709 Hoover Dike Road at 7:30 a.m. Sunday. Sunday’s final weigh-in will be held at the Walmart located at 1005 W. Sugarland Highway in Clewiston beginning at 4 p.m.

Fans will also be treated to the FLW Expo at Walmart on Sunday from noon to 4 p.m. prior to the final weigh-in. The Expo includes Ranger boat simulators, the opportunity to interact with professional anglers, enjoy interactive games, activities and giveaways provided by sponsors, and fans can learn more about the sport of fishing and other outdoor activities. All activities are free and open to the public. Also on Sunday, country music artist Josh Thompson will perform a free live concert on the Walmart weigh-in stage at 3 p.m.