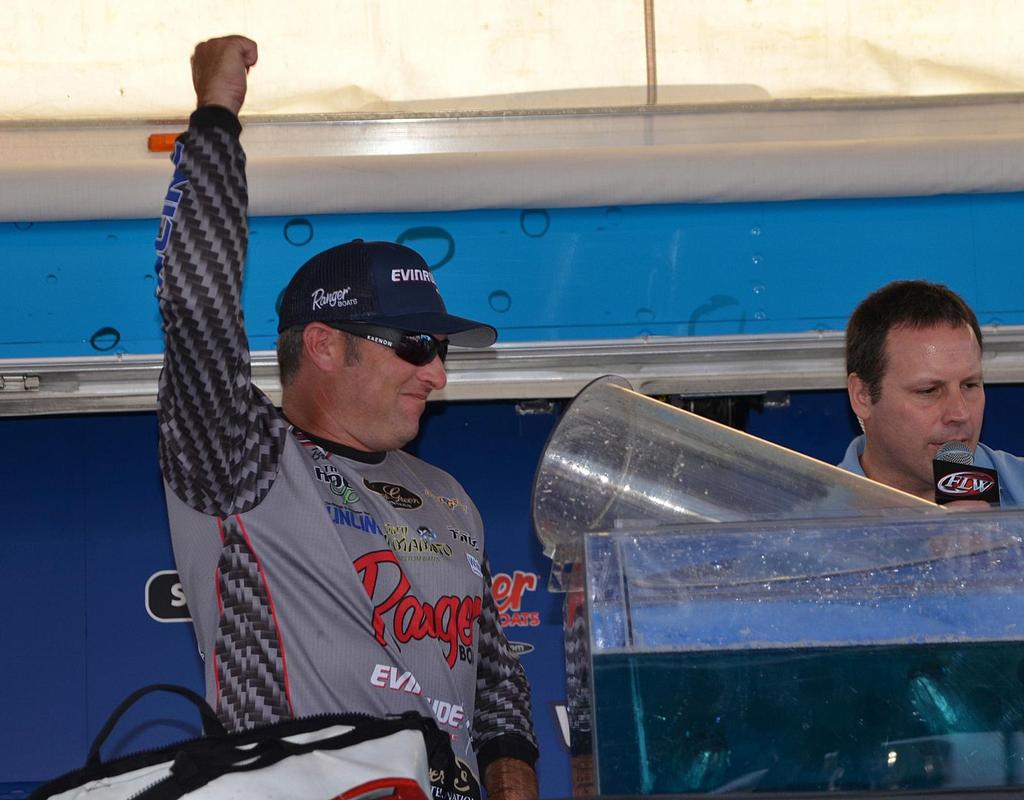 CLEWISTON, Fla. – Pro angler Brett Hite of Phoenix, Ariz., brought a five-bass limit to the scale Sunday weighing 14 pounds, 11 ounces to win $125,000 at the Walmart FLW Tour on Lake Okeechobee presented by Mercury. Hite’s four-day catch of 20 bass weighing 88-14 gave him a 6-pound, 6-ounce margin of victory in the tournament that featured 178 of the world’s best bass-fishing anglers competing in the first event of the 2014 Walmart FLW Tour season.

“What a great tournament,” said Hite, who earned the second career FLW Tour victory of his career. “You don’t get this opportunity very often, and you really cherish it when you do. There is nothing better than fishing your gut feelings and never second-guessing yourself. I didn’t lose a fish this week, and I fished a flawless tournament. It’s so grueling out here fishing at this level; I’m just very thankful.

“The key for me this week was making the right decisions,” Hite continued. “I would not have won this tournament had I not made the decision to switch to my secondary pattern yesterday. There was something in my gut that just told me that I needed to do something different, so I made the decision to go flipping. I’ve gotten burned here in Florida in years past by not having a backup pattern, and it really saved me.”

Hite said that he decided in practice to focus entirely on the Lake Okeechobee area known as the Monkey Box and remained there throughout the event.

“The first day of practice I pulled up on a spot and I realized that there was more hydrilla there than there had been in years past,” Hite said. “That got my wheels turning and I got pretty excited because the ample amounts of grass allowed me to fish more to my strengths and have a lot more spots. All of my spots were really close, and that allowed me to fish more efficiently and longer than everybody else. Maximizing your fishing time in these tournaments can really be crucial.”

Hite said that his big-fish baits this week were a Z-Man Original ChatterBait Elite with a green-pumpkin Yamamoto Swimming Senko and a ¼-ounce swimjig with the Swimming Senko. His biggest fish on day one came on a plain 6-inch black-and-blue-colored Yamamoto Senko rigged with a 1/8-ounce Reins Tungsten weight on a 5/0 Gamakatsu EWG hook. He also caught a few fish on a black-and-gold-colored EverGreen Combat Crank 60. When Hite was forced to move to his secondary punching pattern, he punched with a black and blue Yamamoto Flappin’ Hog with a 11/2-ounce Reins Tungsten weight.

Pros competed for a top award of up to $125,000 this week plus valuable points in the hope of qualifying for the 2014 Forrest Wood Cup presented by Walmart, the world championship of bass fishing. The top 35 anglers in the point standings from the six events on the 2014 Walmart FLW Tour will qualify. The 2014 Forrest Wood Cup will be in Columbia, S.C., Aug. 14-17 on Lake Murray and is hosted by Capital City/Lake Murray Country Regional Tourism Board.

The FLW Tour stop on Lake Okeechobee presented by Mercury Marine was hosted by Roland and Mary Ann Martin’s Marina and Resort and the Hendry County Tourism Development Council. It was the first of six events in the Walmart FLW Tour’s 2014 season. The next Walmart FLW Tour event will be held at Lake Hartwell March 6-9 in Seneca, S.C., and is presented by Ranger Boats. The event will be hosted by the Mountain Lakes Convention and Visitors Bureau, and boats will launch from Clemson Marina in Seneca. For a complete schedule, visit FLWOutdoors.com.