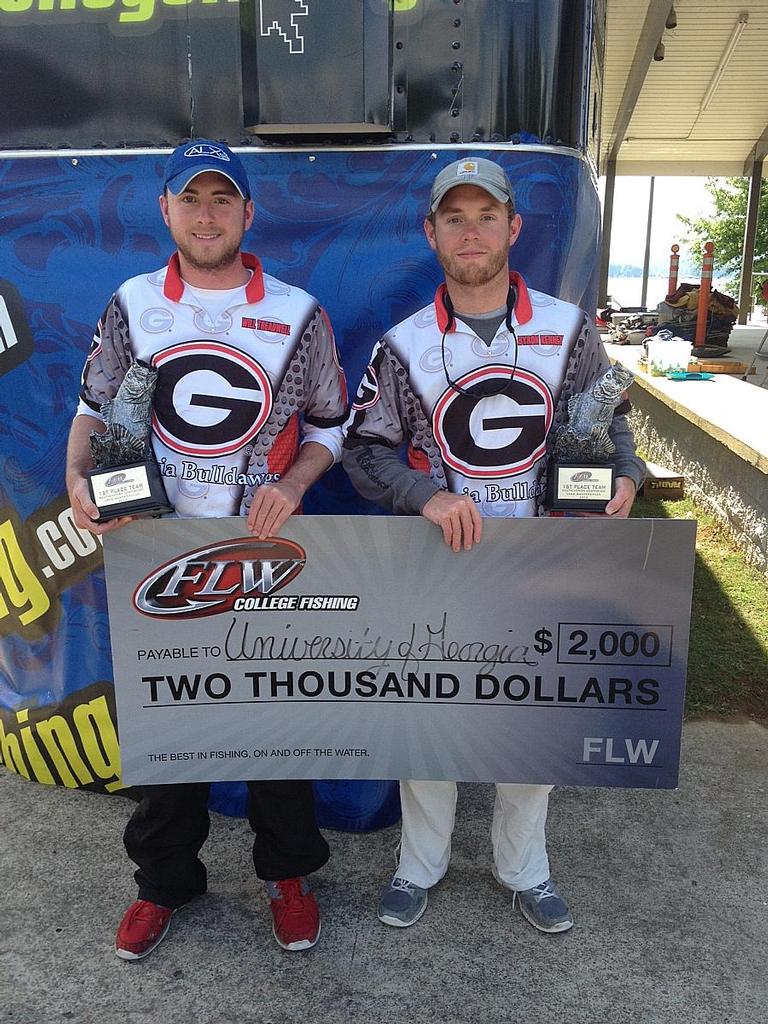 GUNTERSVILLE, Ala. – The University of Georgia team of Byron Kenney of Griffin, Ga., and Will Treadwell of Buford, Ga., won the FLW College Fishing Southeastern Conference event on Lake Guntersville Saturday with five bass weighing 26 pounds, 15 ounces. The victory earned the club $2,000 and advanced the team to the FLW College Fishing Southeastern Conference Invitational tournament.

“Today was so awesome,” said Kenney, who recently graduated with a degree in Agricultural Business. “We’ve had a string of bad luck our past few tournaments and we hadn’t qualified for the Invitational at Chickamauga. This was my last chance. I’m so happy that we finally broke our curse.”

The Bulldog bass club said that they targeted the Guntersville ledges, fishing deep with a jig and a deep-diving crankbait. They estimated that they caught between 60 to 80 fish throughout the day, with 30 of them weighing more than four pounds.

“We found our ledges earlier this week in our pre-fish period,” Kenney said. “We caught a limit right away at our first spot today and then caught fish pretty steadily all day long. Most of our fish came on a ¾-ounce football-head jig with a Wackem Crazy Baits Tater Bug, both in green-pumpkin. We also caught some fish on a Strike King 10XD crankbait.”

“There wasn’t nearly as much boat traffic today as I thought there would be,” said Treadwell, a senior majoring in Finance. “We had seven or eight different areas that we fished and we rotated through each around three or four times. We saw a few boats, but a lot of our areas we had to ourselves.

“I think one of the main keys for us today was our rods,” Treadwell continued. “We fished with both ALX Rods and Fenwick Rods and they were clutch when we were throwing that 10XD.”

“Our Lowrance electronics were pretty crucial, too,” added Kenney. “We were able to find those big schools out deep and get on the winning fish.”

The top 15 teams that advanced to the Southeastern Conference Invitational tournament are:

FLW College Fishing teams compete in three qualifying events in one of five conferences – Central, Northern, Southern, Southeastern and Western. The top fifteen teams from each regular-season tournament will qualify for one of five conference invitational tournaments. The top 10 teams from each conference invitational tournament will advance to the 2015 FLW College Fishing National Championship.

The FLW College Southeastern Conference Invitational tournament is scheduled for Oct. 18-19 at Lake Chickamauga in Hixson, Tenn., and is hosted by the Greater Chattanooga Sports Committee.