“That makes win number two this year and number four (on Barren River Lake) in the last three years,” said Fox, who has dominated on Barren River Lake in recent BFL history. “I practiced before the tournament and I caught a lot of fish but I didn’t catch many big fish,” said Fox. “But, this past cool spell dropped the water temperature and the bigger fish moved in to those same places.”

Fox said that he targeted chunk rock and big pieces of timber in 4 to 8 feet of water with a green-colored ½-ounce jig.

“I caught six good, solid keepers by 10:30 a.m. on Saturday on a strip of bank about a half mile long,” Fox said. “I came back the next day and made three trips down it and had a limit by 9:30 a.m., including one fish that was about 6 pounds.

“To me it was a perfect weekend,” Fox finished. “I didn’t really feel good about going, but everything fell into place. I’ll be 64 years old in a few days and it was a great early birthday present.” 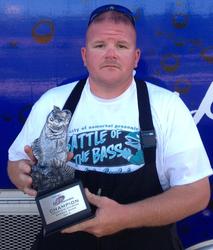