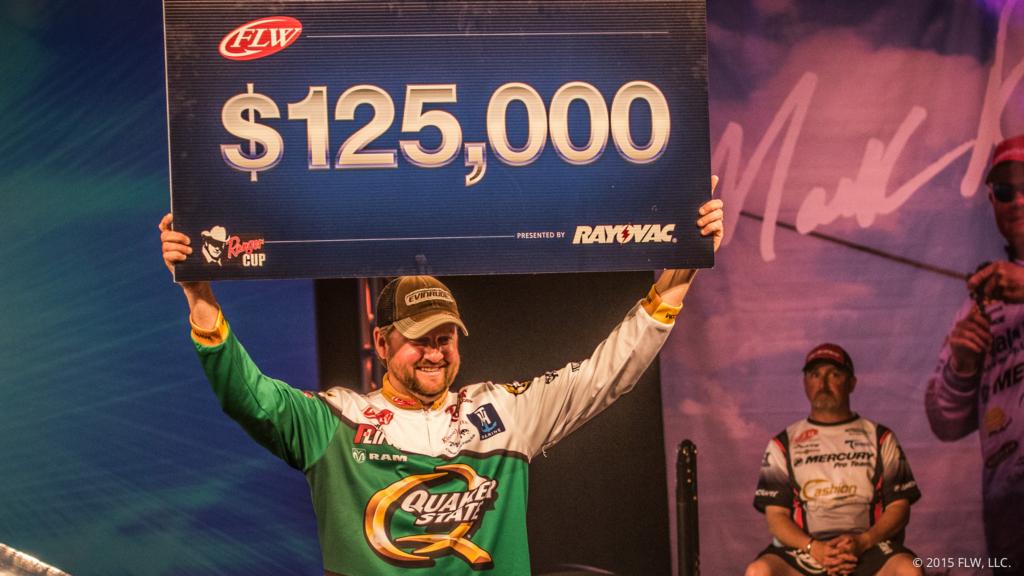 North Carolina Pro Bags Largest Stringer of Tourney on Final Day to Clinch Victory
April 26, 2015 • MLF • Press Releases
ROGERS, Ark. – Quaker State pro Matt Arey has been crowned the new “Mr. Beaver Lake.” After winning this same event in 2014, the Shelby, North Carolina, native caught a five-bass limit Sunday weighing 17 pounds, 13 ounces – the largest stringer weighed in the four-day tournament – to win the Walmart FLW Tour at Beaver Lake presented by Rayovac. Arey’s four-day total of 20 bass weighing 55 pounds, 6 ounces earned him the top prize of $125,000.
Arey became the third angler to win multiple events at Beaver Lake in the 17 visits the Walmart FLW Tour has made to the White River impoundment, as FLW Tour pro Clark Wendlandt won there in 1999 and 2001 while former pro Andre Moore won in 2002 and 2005. Arey became the first to win in consecutive years.
“This is an incredible feeling,” said Arey, who has won $250,000 on Beaver Lake in just the past 379 days. “To win two years in a row here is just unthinkable. Experience is everything as a professional angler. The more I do this, the more comfortable and confident I am becoming.”
Arey displayed that confidence Sunday when he dramatically boated his largest fish of the day, an estimated five-pounder. As he casted out and retrieved his swimbait, he noticed the huge fish following his bait all the way to the boat. Out of line, Arey had no choice but to kneel low and drag his bait along the side of the boat. The big bass hit, and Arey immediately boat-swung the fish in a dramatic fashion.
“First, that normally doesn’t happen,” Arey said. “But, back in the day when I was a rookie, I would have stayed standing and just kept winding my bait and the fish would have went back under the dock. Instead, I was able to keep my composure, knelt down and got the fish to bite and in the boat. It’s experience. You just have to block everything else out and fish against the fish.”
Arey credited two key baits for the majority of his catch this week – a hand-poured homemade swimbait rigged on a 7/0 Gamakatsu EWG Monster hook and a wacky-rigged Lunkerhunt Lunker Stick.
“Each day I would start in Prairie Creek and work my way six to eight miles up the river,” Arey said. “On the third day I went all the way to the Rocky Branch and Van Hollow areas and caught some key bed fish that really saved my tournament.
“Momentum is huge in this sport, and I really hope that I can carry some of it over into our next event in two weeks on Lake Eufaula.”
The top 10 pros finished the tournament:
1st:          Quaker State pro Matt Arey, Shelby, N.C., 20 bass, 55-6
2nd:         Tracy Adams, Wilkesboro, N.C., 20 bass, 49-12
3rd:          Livingston Lures pro Andy Morgan, Dayton, Tenn., 20 bass, 48-10
4th:          Rayovac pro Cody Meyer, Auburn, Calif., 20 bass, 48-10
5th:          Bryan Thrift, Shelby, N.C., 20 bass, 46-13
6th:          John Cox, Debary, Fla., 18 bass, 46-4
7th:          Peter Thliveros, Saint Augustine, Fla., 20 bass, 44-8
8th           Livingston Lures pro Stetson Blaylock, Benton, Ark., 19 bass, 44-4
9th:          Vic Vatalaro, Kent, Ohio, 20 bass, 43-11
10th:        Mike Surman, Boca Raton, Fla., 20 bass, 43-7
A complete list of results can be found at FLWFishing.com.
Overall there were 47 bass weighing 110 pounds, 3 ounces caught by pros Sunday. Eight professionals weighed in five-bass limits.
Luke Dunkin of Lawrenceburg, Tennessee, won the co-angler division and $20,000 Friday with a two-day total of 10 bass weighing 18 pounds, 2 ounces, followed by Todd Lee of Jasper, Alabama, who finished in second place for the second consecutive tournament with 10 bass weighing 17 pounds, 15 ounces worth $7,500.
In addition to casting for top awards of up to $125,000 cash in the pro division and up to $25,000 cash in the co-angler division, anglers are also competing for valuable points in hopes of qualifying for the 2015 Forrest Wood Cup, the world championship of bass fishing. The 2015 Forrest Wood Cup will be in Hot Springs, Arkansas, Aug. 20-23 on Lake Ouachita and is hosted by Visit Hot Springs. The Forrest Wood Cup Champion could win as much as $500,000 – professional bass-fishing’s richest prize.
Coverage of the Beaver Lake tournament will be broadcast in high-definition (HD) on NBC Sports Network (NBCSN) October 12 from 7 p.m.-8 p.m. ET. when Season 20 of “FLW” returns this fall. The Emmy-nominated "FLW" television show airs on NBCSN, the Pursuit Channel and the World Fishing Network and is broadcast to more than 564 million households worldwide, making it the most widely distributed weekly outdoors-sports television show in the world.
The Walmart FLW Tour stop on Beaver Lake presented by Evinrude was hosted by the Rogers Convention & Visitors Bureau. It was the third of six regular-season events in the FLW Tour’s 2015 season. The fourth Walmart FLW Tour event of 2015 will be held at Lake Eufaula, May 14-17 in Eufaula, Alabama, and is presented by Quaker State. The event will be hosted by the Eufaula Barbour County Chamber of Commerce. Boats will launch from Lakepoint Resort State Park Marina in Eufaula. For a complete schedule, visit FLWFishing.com.
For complete details and updated information visit FLWFishing.com. For regular updates, photos, tournament news and more, follow us on Facebook at Facebook.com/FLWFishing and on Twitter at Twitter.com/FLWFishing.
ABOUT FLW
FLW is the industry’s premier tournament-fishing organization, providing anglers of all skill levels the opportunity to compete for millions in prize money nationwide in 2015 over the course of 240 tournaments across five tournament circuits, four of which provide an avenue to the sport’s richest payday and most coveted championship trophy – the Forrest Wood Cup. FLW tournament fishing can be seen on the Emmy-nominated “FLW" television show and is broadcast to more than 564 million households worldwide, making it the most widely distributed weekly outdoors-sports television show in the world. For more information about FLW visit FLWFishing.com and look for FLW on Twitter, Facebook, Instagram and YouTube.
# # #